The first film, Kingsman: The Secret Service, set out to replicate the frenetic energy and chaos of a comic book and, in some ways, it succeeded far better than any of the Marvel or DC adaptations we’ve seen in past years. But the sequel, Kingsman: The Golden Circle, is largely treading water and going nowhere, while indulging the worst aspects of comic book storytelling. 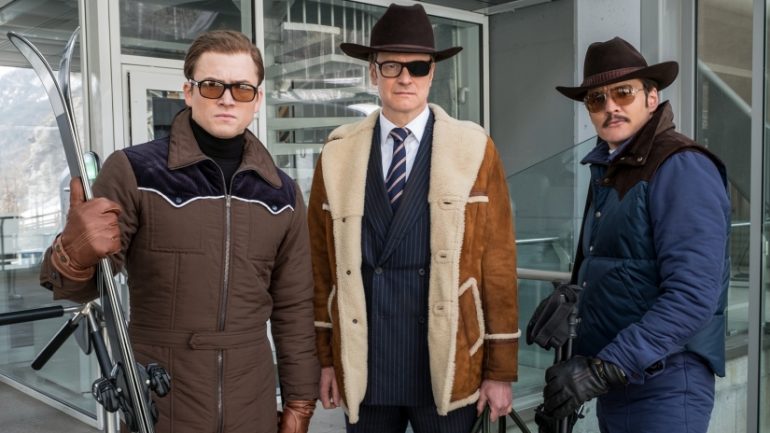 Kingsman: The Golden Circle picks up from the previous film, where Egsy (Edgerton), now a full-fledged secret agent code-named Galahad is living his best life with his girlfriend Tilde, the princess of Sweden. Tragedy strikes and he is forced to flee the country and seek aid from Statesman, the American counterpart to the British team. From there they must uncover a plot by drug kingpin Poppy Adams (Julianne Moore), the psychotic mastermind behind a new plan to take over the world.

So far, so clichéd. Kingsman does fairly well with clichés though, taking them to the next level or at least mocking them outright. Where it makes its first few errors is with how the plot is set up – characters from the previous film are killed unceremoniously to “up the stakes” and other characters are brought back from the dead in a very comic book way. I groaned each time I saw these things happen, and it felt like it stopped the story from happening organically. The Statesman, despite being a hyped part of the movie, felt marginalised. Channing Tatum is removed from the plot almost immediately, and Jeff Bridges and Halle Berry don’t have enough time on screen. Pedro Pascal’s character makes the biggest impression, mostly because he has a laser lasso, but that’s about it

The best side-plot is that involving Egsy and his girlfriend, and the romance and struggles between them were genuinely relatable in many ways. I was surprised, seeing as she first appeared as a one-off joke at the end of the first film. As a counterpoint to the usual James Bond activities, Egsy is in a committed relationship with one woman, and his spy-activities like needing to seduce a female target cause him to call his girlfriend and ask her if it’s alright. Even when he needs to do it to save the world, he seems visibly upset with being disloyal. It’s done very sweetly.

The main villain is played very well by Julianne Moore, but overall she is a weaker character than Samuel L. Jackson was in the previous film, and her plot still basically comes down to “Bad guy will destroy the world if not stopped in 24 hours, time is running out.” The final great and surprising performance comes from, of all people, Elton John, whose involvement I won’t spoil for you here.

The biggest problem Kingsman: The Golden Circle really has is that after the big success of the previous film, they didn’t really seem to know what to do, aside from just do it again but bigger and more explosions. This isn’t a recipe for success, and it feels very inferior to its previous film, despite still being watchable in its own right.