In Kingpin #3, Sarah Dewey – the woman hired by Wilson Fisk to write his biography – is confronted by the Devil of Hell’s Kitchen. Despite being warned about how associating with the Kingpin can be trouble, she travels with Fisk around the neighbourhood and learns more of how he’s regarded in the area. It’s a shocking revelation to her, and one which causes her journalistic instincts to kick in. However, after a fight with her ex and an interview with the villain Tombstone gets leaked to the press, she soon finds herself a target. But can even the Kingpin of Crime save her, or has she bitten off more than she can handle?

This series continues to impress, mostly because it’s unexpected.

Sarah Dewey may not be a big character in the Marvel Universe, but the way she’s being portrayed and written in this series would make anyone think that she is. Yes, this may be the Kingpin’s series, but the focus is on her and it works completely. Everything about her personal life rings true as if she’s just stepped straight into the page from the real world. She’s sympathetic without being weak, and savvy without being unbelievable. Even the way she turns a death threat from Tombstone into a potential news story works.

And that’s what the real key is to this series so far. 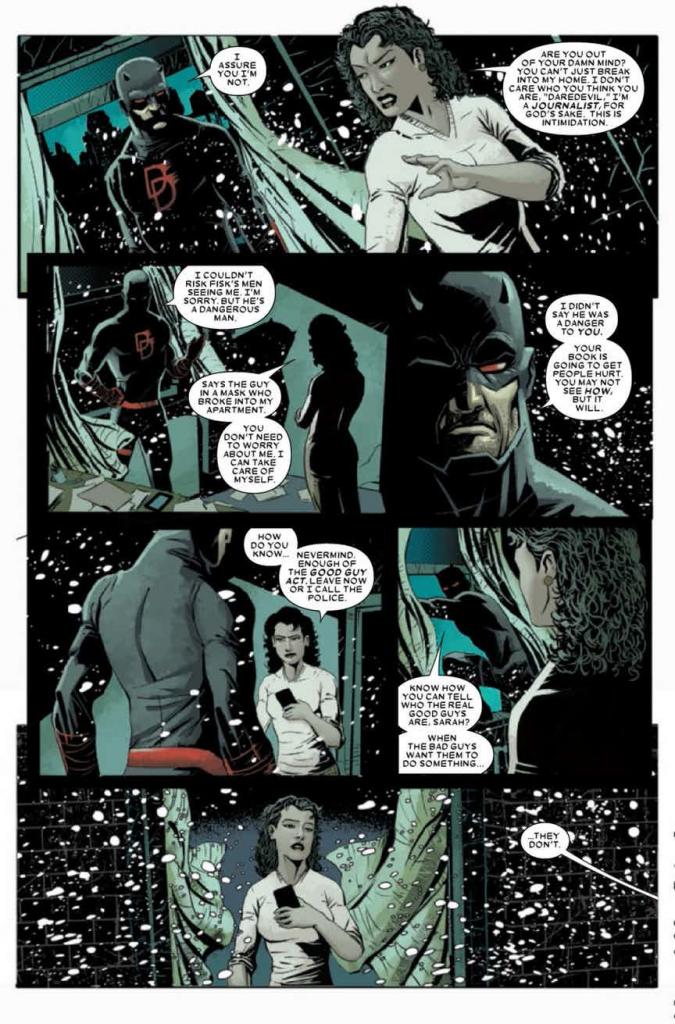 This isn’t some standard superhero/supervillain slugfest. It’s about people, not costumes. Even the ominous presence of Fisk, looming larger-than-life over everything here, is shown in a way which is far more human. We know he’s a monster of a man, but for all his actions he’s still just a man. How much of what we see of him is genuine is, of course, one of the arguments this series makes. As if working on the readers’ paranoia, there’s a constant feeling that events may not quite be what they seem.

The art has settled down completely and is now working hand-in-hand with the writing to give this series a true identity of its own. It’s strangely elegant at times, even during the occasional moments of violence displayed, and once more is reminiscent of both Frank Miller and Tim Sale.

Kingpin #3 is doing everything right by telling a personal tale, all seen from the perspective of an outsider. It may not be the Daredevil or Kingpin series that some fans would want, but it’s absolutely the one which is needed. It’s definitely worth reading.