Kingpin #1 Review – A Fantastic Beginning To The Series 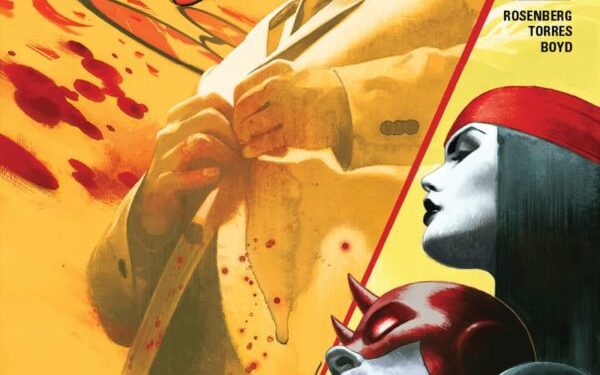 Once again, Kingpin is back on top of his game in Kingpin #1. After the previous miniseries showed him at his lowest and added new layers to his character, you may think that the job was done. However, here the story takes things to a whole new level. While the plot may seem slightly obvious, it’s handled with a level of street-smart grittiness and style. The class of writing from Matthew Rosenberg is so good that it brings back fond memories of Frank Miller’s best Daredevil tales. We review Kingpin #1. Wilson Fisk – the Kingpin of crime – continues his slow climb back to power, and his latest tactic seems to be an incredibly simple one: to tell the truth. To that end, he arranges a meeting with Sarah Dewey, a boxing reporter and former hard-hitting news journalist. Things have been rough for her lately, and her career and life have spiralled out of control.

When the Kingpin offers her the chance to write his biography, she initially wants nothing to do with a notorious criminal like Fisk. Yet slowly she finds herself drawn in to taking the job, both out of desperation as well as being seduced by the frank, honest nature of the man. While she’s keen to print nothing but the truth – something the Kingpin is quite happy to allow – she isn’t aware of how low Fisk will go to ensure that he gets what he wants…

The characters are introduced in a way which feels natural and builds up steam at a surprising rate. By the end of the first issue, it’s easy to sympathise with Sarah and relate to her problems. Likewise, the Kingpin is both charming and menacing in equal measure. His desire to make the city a better place is always one of the most striking ironies of his character, and here we see something as simple as a mugging bring out the best and worst in him. Of course, Matt Murdock shows up in the issue too, but his presence is merely a brief reminder of his place in Fisk’s story. That Murdock comes across as a bitter, unlikeable figure who’s quick to judge any associate of Fisk’s in a negative light is one of the most relevant moments of the whole issue, and shows Daredevil’s failings in how he judges everyone – sometimes unfairly.

The artwork, by Ben Torres, may seem average at first but – as with the writing – it picks up in style as the issue progresses. Small touches slowly accumulate and, by the end, it generates an almost film-like quality of showing Sarah’s small world expanding and taking on a colourful life of its own.

Kingpin #1 is a fantastic beginning to the series and one which is highly recommended. If you’re a Daredevil fan or simply appreciate villains being given increasingly textured stories, then this is definitely for you.