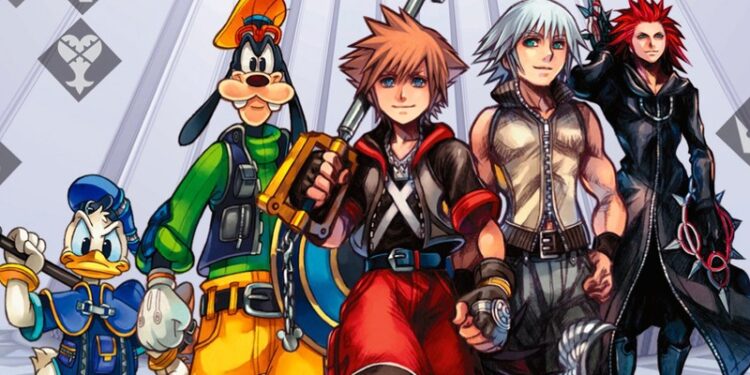 Since the announcement of Kingdom Hearts III back in 2013, many fans have been waiting patiently for the next instalment in the franchise. With still no confirmed release date in sight, Square Enix has released Kingdom Hearts 2.8 HD: Final Chapter Prologue Collection (yes that is the full title name) to keep us busy until Kingdom Hearts III eventually releases. Kingdom Hearts: Dream Drop Distance is an HD remaster of the 3DS exclusive. Players get the chance to take control of both Sora and Riku as they embark on a quest to hone their skills and become Keyblade Masters. As part of this quest, they are tasked with awakening sleeping worlds, which sees them interacting with various Disney and Final Fantasy characters. Of course, awakening these worlds will not be easy. Sora and Riku will be facing new enemies known as Dream Eaters, rather than the Heartless and Nobodies players are used to. These evil (yet, oh so cute) creatures continually devour dreams (as their name suggests). Luckily, players aren’t left to fend off these beasties on their own. They are aided by creatures called Spirits (basically the good version of the Dream Eaters). Players are able to craft Spirits using recipes and then level them up or unlock new abilities by playing and interacting with them. Basically, it’s a combination of Nintendogs and Pokemon. It’s an interesting and fun mechanic and one that I found myself spending quite a bit of time on. I was surprised at how well the touch controls of the 3DS was translated to the DualSock controller. And although there were moments when the controls did feel a bit finicky, mostly when using the Reality Shift mechanic, most of the time I didn’t experience any issues. Kingdom Hearts: Dream Drop Distance’s combat is surprisingly fast paced thanks to the introduction of the Flowmotion system. This system allows players to bounce off walls, grind on rails and even swing on poles during combat. By incorporating these moves into combat, player’s are able to pull off some powerful attacks. Although the camera did sometimes struggle to keep up, I found that the Flowmotion system made combat highly enjoyable.

Another new mechanic that is introduced in the game is the Drop System. Both Sora and Riku have a Drop timer that continually counts down as you play. When the timer runs out players are forced to switch characters, regardless of what they are currently doing. This also means that players need to complete each world twice, once playing as Riku and a second as Sora. Luckily, both protagonists do encounter different events which keep the feeling of repetition at bay. At first, the forced switch of characters felt a bit jarring, but once I got used to it and discovered that I could extend the timer using various items, it became part of the natural flow of the game. There are various worlds that players visit in Kingdom Hearts: Dream Drop Distance. Although they are quite big, they tend to feel noticeably sparse and empty at times. Obviously, this has to do with the fact that the game was originally developed for a handheld system, and it is because of this that it is so noticeable when playing on a big screen.

Visually, Kingdom Hearts: Dream Drop Distance HD looks surprisingly good for a game that was developed for the 3DS. Characters are crisp, and environments look sharp and colourful. The game sees Aqua wandering through the Realm of Darkness and discovering that the world she had previously visited has somehow been overcome by the darkness. Aqua decides to investigate. This sets a series of events in motion that explore the emotions that she has been experiencing during her isolation in the Realm of Darkness. The story focuses a lot of attention on the effects of being isolated and alone. Without spoiling too much, it’s a story about finding hope in the darkness.

Even though I did find the story intriguing, it’s the fact that the game uses the Unreal 4 engine (the same engine that Kingdom Hearts III will be using) that is the main draw. As can be expected, the game looks gorgeous and, while characters appear more lifelike than in previous Kingdom Hearts games, it still manages to maintain its cartoon-like visual style. The wide open colourful and vibrant environments feel truly epic. There is a lot of focus placed on verticality, which encourages players to explore every nook and cranny for treasure. While the beautiful visuals did impress me, it was the combat that had me the most excited. As one can expect from a place called the Realm of Darkness, danger tends to lurk around every corner. Fortunately, Aqua has enough skills and magic up her sleeve to deal with any threat that comes her way. Right off the bat, the combat felt fluid and fast paced, with every blow from Aqua feeling weighty and powerful. By chaining together her fighting styles, abilities and magic, Aqua becomes a true force to be reckoned with.

Although it doesn’t take long to finish Kingdom Hearts 0.2: Birth By Sleep A Fragmentary Passage, I thoroughly enjoyed my time playing it.

The last part of the collection is the animated movie Kingdom Hearts X Back Cover, which delves into the early history of the franchise and the tale behind the Keyblade War. It serves as an interesting prequel to the entire series and explores more of the Kingdom Hearts lore. The Kingdom Hearts 2.8 HD: Final Chapter Prologue Collection has invigorated my love and excitement for the Kingdom Hearts franchise. Visiting colourful worlds, exploring the meaning of friendship and raising some cute pets in the process, has made me rediscover why I enjoyed the franchise in the first place. And while Kingdom Hearts: Dream Drop Distance does show its age at times, I found myself enjoying every moment of it. The best part of the collection still remains Kingdom Hearts 0.2: Birth By Sleep A Fragmentary Passage. It gives us a beautiful, fast paced yet short glimpse at what Kingdom Hearts III could be. Although the collection will probably not convert those that have never enjoyed the franchise, it still remains a must-have for fans of the series.

In the end, the collection serves as a great appetiser.