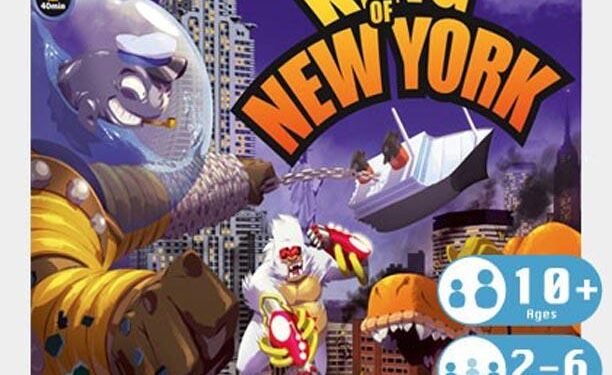 In 2011, King of Tokyo was released, a great Yahtzee style board game in which you take control of giant monsters battling each other for control of Tokyo. It was one of those games which could be enjoyed by casual board gamers, as well as more hardcore ones. I loved the game not only because it was quick to play, but because I love the idea of monsters destroying a city as a theme. Three years later, the King of New York board game is released. Would this game replace King of Tokyo as one of my all time favourite games?

In this review, I will be referring a lot to King of Tokyo as I feel it difficult to review King of New York without referring to its predecessor.

King of New York follows the same theme as King of Tokyo. This time the giant monsters are battling for control of New York. Unlike its predecessor you now not only have to contend with your fellow monsters, but with the military as well. As with King of Tokyo, the production values of the King of New York board game is top notch.

The art and design really are the glue that binds the theme together. It’s colourful and fun, and makes you want to pick up the game and play it.

The game comes with six new monsters, each with their own personality. You can use the King of Tokyo monsters in King of New York, which I really appreciated.

Each monster comes with their own separate player (or should I say monster) board. These display your health and victory points. As with the previous game, the boards are really sturdy and well put together. Each player board has a corresponding cardboard cut out monster. I really love the new monsters. Their designs are really fun and wacky, from the Fish in a giant bowl to a T-rex wearing a sheriff outfit they all have their own personality that shines through thanks to great art and design.

I really would have loved if the game had miniatures instead of cardboard cutouts, although I do understand that that would have affected the price of the game drastically.

The dice, which you will be chucking around a lot, are good quality dice. They have a great feel and weight to them. The symbols on the dice are engraved which prevents them from fading and also makes them easy to read. Some players might find the dice a bit too big for their liking.

The game also comes with special cards. The cardstock used for these are good, and the gloss finish on them makes them easy to shuffle. The humour that permeates the game can also be found on these cards. There were many occasions where I found myself giggling at some of the pictures on them.

The green translucent energy cubes are back and add just as much to the theme as they did in the previous game.

A new addition that wasn’t in the previous game is the building / military tiles. These are made of really good thick cardboard. This same cardboard is used for the various tokens that come with the game.

Lastly the game board itself is sturdy, and has the great art and design on it that is found throughout the components of the game. King of Tokyo players will notice that the board in the new game is much larger and has more spaces for moving around.

The game board in King of New York consists of five boroughs: Staten Island, The Bronx, Queens, Brooklyn and Manhattan (which is divided into lower, midtown and upper Manhattan). Each borough gets 3 sets of 3 building tiles placed on them (with the building side up).

Both the Superstar and Statue of liberty cards are removed from the special cards deck and placed separately. The cards are then shuffled and 3 cards are placed face up next to the deck.

The tokens and energy cubes are placed in reach of each player.

The game starts off with each player choosing their respective monster and player board. Each player sets their health to 10 and their victory points (VP) to 0. Players then place their monster (starting clockwise) in a borough of their choice. Each borough can only accommodate 2 monsters.

Players win by either killing off all the other monsters thus being the last one standing or by being the first to score 20 victory points. 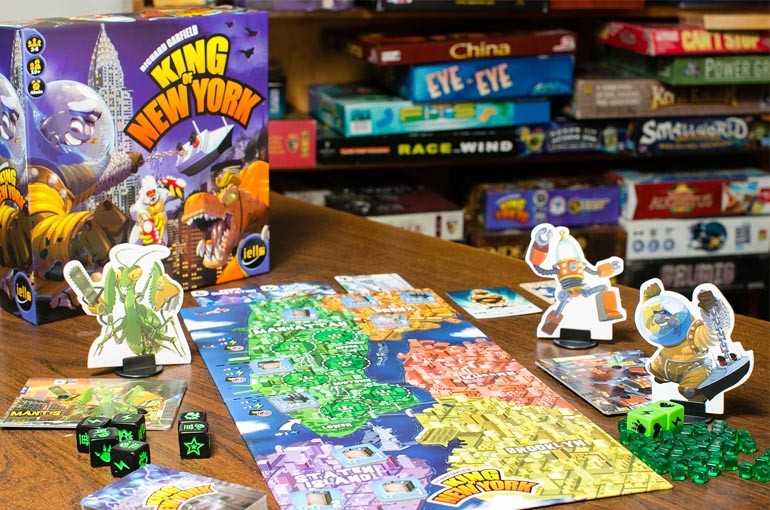 Each player turn consists of the following:

Roll the dice: A player rolls all the black dice (6 of them) at once. Players can reroll their dice up to three times, each time deciding which dice to keep. Each symbol corresponds to an action.

Resolve the dice: Players resolve each symbol on the dice they rolled. These can be resolved in any order (although all dice of the same type must be resolved before resolving another type).
The dice effects are:

Lightning bolt – Players get an energy cube for each lightning bolt they roll.
Claw – Players do one damage for each of the claw icons they roll.
Building – These icons can be used to destroy buildings. For each building icon they roll they can do one damage to a building/military vehicles.
Heart – Players heal one health for each heart icon they roll (except if they are in Manhattan).
Star – If a player rolls 3 or more stars they acquire the Superstar card. This card enables them to score a victory point for each star they roll, as long as they have the card.
Skull – These icons activate the military units on the map. These units attack the players depending on how many skulls are rolled. 1 skull they attack the player, 2 skulls they attack all the monsters in your borough and 3 skulls they attack all the monsters on the board.
Move: Players can move their monsters to any of the boroughs (expect Manhattan).
Buy cards: Players can purchase special cards using the energy they acquired.
Players then end their turn.

A new addition to the formula is the buildings and military units. In King of Tokyo, players could roll their dice to score victory points, not anymore. The new dice do not have the victory point icons on them. The only way to score is by being in Manhattan, destroying buildings or receiving points from special cards. This makes for a more aggressive game with lots of player interaction.

There is a downside to destroying buildings. When a building is destroyed, a player receives the indicated reward for destroying it (energy, VP etc.), but it immediately flips over revealing a military unit. These units can be destroyed for further benefits. They do, however, pose a danger as they are able to attack you when players roll the skull icons. 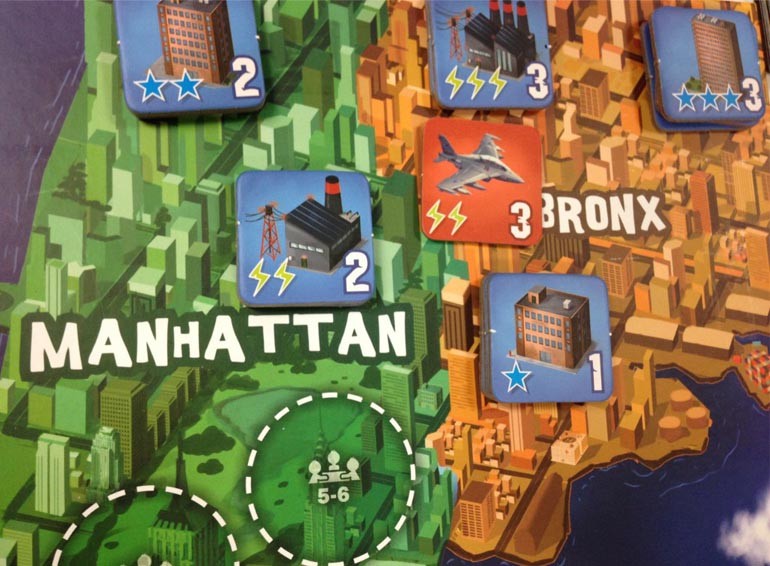 It is no secret that I am a huge fan of King of Tokyo. It is one of those games that just seem to hit the table at every gaming day. Does the King of New York board game measure up to these standards? I would say yes.

Not only is it a beautiful game with a theme I love, but it adds mechanics to the formula its predecessor established that makes sense and makes the game even more fun. The increased player interaction is also something I welcome and found missing in King of Tokyo.

One of the problems I had with King of Tokyo was that it was too easy for players to play defensively and rack up victory points by just rolling the dice. King of New York fixes this by taking away the ability to score victory points this way. This forces the player to play more aggressively and think more tactically.

The game draws even more focus on its predecessors risk reward mechanics. We played many games in which I pushed my luck just a little too far. Staying in Manhattan too long I was eventually destroyed by the other players. The new building tiles also add some much needed strategic depth. I found myself moving around a lot on the board trying to destroy as many buildings as I could, thereby scoring victory points. Once the buildings were destroyed the danger of the military vehicles attacking me was ever present and added some tension to the game.

I never really felt like a monster destroying a city in King of Tokyo. In King of New York, the new mechanics makes it feel like you are going around trashing the city and fighting off the military.

I do miss the character-specific powers that the expansion added to King of Tokyo as these powers aren’t available in King of New York.

As with its predecessor, I enjoyed playing King of New York. The new monsters, new building/military tiles and the larger board really add a lot to the tried and tested formula of King of Tokyo. I found myself time and again wanting to venture into New York to battle it out to become the King of New York.

Gameplay: 8/10 As with King of Tokyo, King of New York is easy to teach and learn. I did find that King of Tokyo players got a bit confused with some of the new rules every now and then. The game plays a bit longer than its predecessor which might be a draw back for some players.

Components: 3,5/5 The game is a great looking game. The art and design is done well and the component quality is top notch. I still would have loved if the game had miniatures instead of the cardboard cut out monsters.

Complexity vs. Depth: 4,5/5 King of New York has just enough new mechanics to add a bit of complexity and depth to the King of Tokyo formula. The game is still a light to medium weight game though.

Theme: 4/5 As you might have guessed by now, I really love the art of King of Tokyo and King of Now York. Both games deal with a theme I love. The added mechanics to King of New York makes you feel even more like a monster destroying the city.

Overall: 4/5 King of New York still uses the same formula of its predecessor, but adds enough new mechanics to make it worth owning both. I enjoyed the increased player interaction and the more aggressive play style that the game offers. Fans of King of Tokyo should give King of New York a try, they might be pleasantly surprised.

Board game supplied by Timeless Board Games.