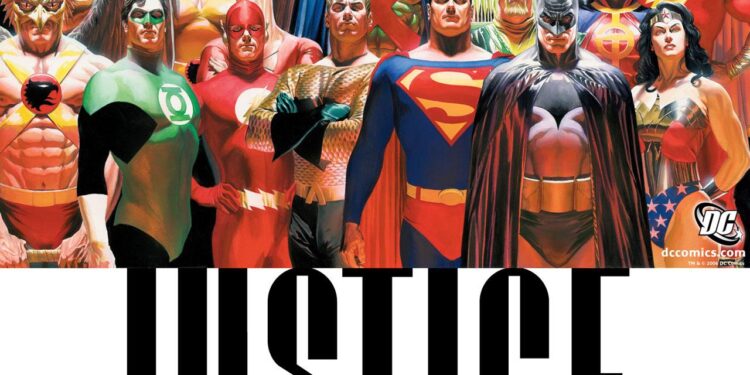 What have your superheroes done for you lately? That may sound like a ridiculous question, but it’s one that Alex Ross, Jim Krueger and Doug Braithwaite posed ten years ago in the 12-issue series Justice. Whenever Ross is involved in any project it instantly becomes an event, but with good reason. For this one, though it was more than that, it was a chance to see the silver age Justice League at their best. Of course, you can’t truly appreciate them at their best without seeing them at their worst first. And this time around, they face a threat like never before…

Justice begins with a dream. Or a nightmare, to be more accurate. In the nightmare, the world is in terrible peril and the Justice League are completely helpless. The strange thing is that this nightmare is being shared by the world’s top super-villains, and it scares them. Led by Lex Luthor and Brainiac they set about on their plan to change the world… by using their powers to help mankind.

Captain Cold and Poison Ivy bring water and food to drought-stricken areas. Scarecrow and Toyman cure illnesses and provide prosthetics to those in need. It seems that the villains are doing more good for humanity than the heroes ever did, and public opinion turns against the Justice League.

The villains have another plan though. Thanks to The Riddler they uncover every secret of the League, and systematically set about destroying them. Superman gets pounded to a pulp by Bizarro, Solomon Grundy, Parasite and Metallo. Wonder Woman is poisoned by Cheetah. The Flash is forced to run, lapping himself in an endless chase. Batman is brainwashed, The Atom is shot and Green Lantern is cast into the darkest reaches of distant space.

As for Aquaman, his own fate is the most terrifying of all as he becomes the victim of Brainiac’s surgical experiments. To make matters worse, each Justice League member’s friends and family have been kidnapped and turned against them, including Supergirl, the Marvel family and the Teen Titans.

In their most desperate hour, the only hope for the battered remnants of the Justice League is to trust in its reserve members, the Doom Patrol and the Metal Men. But what can they do to help when the whole world is against them? While not as steeped in history and allegory as Kingdom Come, Justice surpasses it in the most crucial aspect of comic books: it tells a damn good story.

In fact, the writing in Justice is better paced and the adventure more epic than countless other titles out there. The Legion of Doom has never been more sinister, and their plan is sheer genius. The Justice League look tarnished at first, with The Atom questioning their own arrogance for always assuming they would win. Yet as it goes on they shine with every minor triumph, facing adversity almost constantly, and you find yourself desperately hoping that they will win.

The minor characters get time to shine too, with wonderful moments that prove their value as true heroes. One of the most touching is Ralph Dibney – the Elongated Man. Over the years he went from being a much-loved League member to being a joke and an afterthought, and someone easily replaceable by Plastic Man. Yet here he takes on Clayface, not for revenge or to save his wife Sue, but merely because he still believes in the League even though they don’t always believe in him.

The art in Justice is, as you would expect, of the highest quality and each emotion and moment are conveyed perfectly. While each issue of the original run may have taken two months to be produced, it was worth the wait. Thankfully they’re all contained in a single trade paperback now though and it can all be enjoyed in one go.

Basically, this was the complete package in terms of DC at its best and still is.