Justice League Vs Thor: Ragnarok – Who Wins? All Of Us 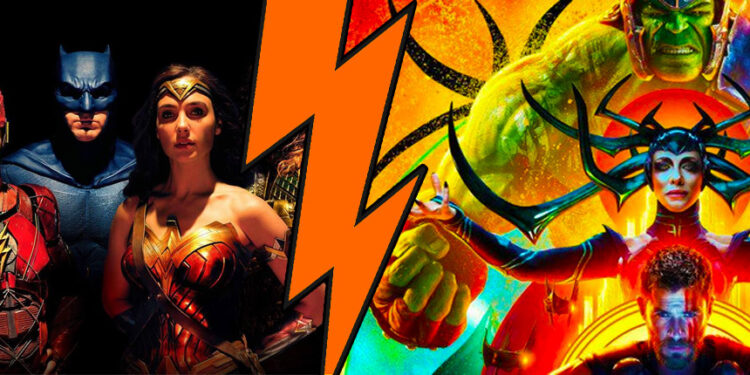 This past weekend at Comic-Con, we were treated to a wonderful plethora of trailers and teasers of forthcoming comic book movies. There was so much to take in and absorb, and it’s fair to say that some of us are still trying to process all the news and reveals.

Undoubtedly, two of the biggest trailers to be unveiled were for Justice League and Thor: Ragnarok, which both come out in November of this year. Judging from the fan reaction for them, I’m surprised the venue still had a roof by the end of it all.

Unfortunately, this event for celebration quickly turned into a pissing contest for the Stans on Twitter, with opposing sides trying to measure whose is bigger and better. Not long afterwards, it degenerated into the tiresome Marvel versus DC debate, and the lowest common denominator sprung up to do what it does best: argue irrationally.

Honestly speaking, why is it important to choose sides in this imaginary and can you not be excited for both films? They look equally incredible. I’m going to give you a reality check here: it’s called the movie business for a reason. If these franchises stop churning out money, they’ll be dead in a second. Sure, Kevin Feige and Geoff Johns are comic book fans at heart – and it shows in their undeniable influence over the films – but if their superiors say it’s over, it’s over.

So, why are we accelerating this demise with sh*t-talking and attempting to bring down the other company? Make no mistake, if Marvel or DC falters, it’ll affect Image, Boom! Studios, Dynamite, Dark Horse and everyone else trying to bring our favourite properties to the live-action world. Heck, if it weren’t for the outlandish success of The Dark Knight and The Avengers, we wouldn’t even be talking about comic book films right now. So, yes, my dear readers, both Marvel and DC are responsible for us even having this debate today.

Let’s get something straight: this isn’t a competition, because we’re the only winners here. Logan, Guardians of the Galaxy: Volume 2, Wonder Woman, The LEGO Batman Movie, Spider-Man: Homecoming – this has been a phenomenal year for superhero films and there’s still more to come. Years ago, we’d never believe we would receive so many comic book films – never mind good CBMs – all in one year.

At the end of the day, we don’t want to be in a situation where we kill what we love. Look at the rock music scene as a prime example of how it can go wrong. Decades ago, it was the cream of the crop for so long and fruitful for many bands, but then the elitism kicked in and the division between what’s rock and what isn’t began. Now, few rock bands manage to make a living because this toxic environment isn’t exactly conducive to success. It’s not dead, but it sure isn’t thriving, either.

With all the above in mind, I have a suggestion. Let’s be less like Comic Book Guy from The Simpsons and more like the bright-eyed kid who first entered a comic book shop. We’re living in the golden age of live-action comic book properties, something we’ve craved for eons, so let’s not try and screw that up, okay?