Justice League vs. Suicide Squad #3 Review – A Breather From The Action 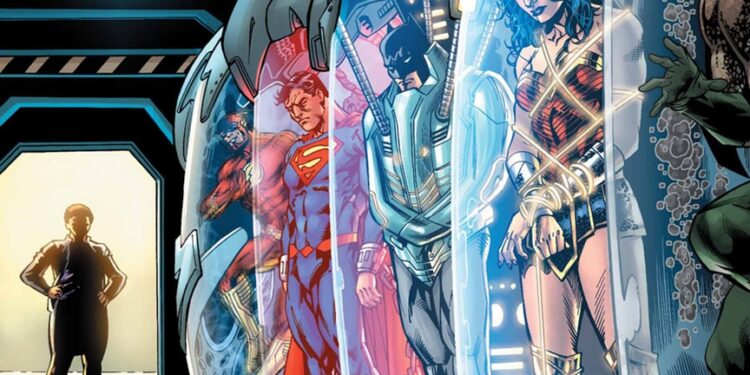 The last issue’s cliffhanger raised the stakes for Justice League vs. Suicide Squad #3. With the Justice League incarcerated in Belle Reve, would they become subservient to Amanda Waller or attempt a heroic breakout? The answer’s revealed fairly quickly as Batman escapes his Hannibal Lecter-inspired restraints and wipes the floor with Belle Reve’s incompetent guards (seriously, who hires these guys?). When he confronts Waller, she responds with a typical sardonic comment, “Took you long enough, Batman. I figured you’d have broken free at least an hour ago.” Being the super sleuth he is, Batman says locking up the Justice League was a huge risk and she’d only do it if she was in trouble, and demands to know what’s going on.

In the interim, the Suicide Squad goad the Justice League members still locked in their prison cells. There’s a humorous exchange between Harley Quinn and Wonder Woman and The Flash and Captain Boomerang, which I won’t spoil for you because it’s a hilarious read, and Superman has a heart to heart with Killer Frost. The latter’s conversation, coupled with the current happenings on The Flash TV series and her recent appearance on Justice League Action, leads me to believe we’ll see Frost siding with the good guys sooner rather than later—and I’m okay with that. We already have too many icy bad guys in the form of Captain Cold and Mr Freeze. Waller finally releases the Justice League from their cells and explains how there was a prison break at a top-secret location and a real danger was freed into the world. She says the team of Emerald Empress, Doctor Polaris, Rustam, Johnny Sorrow and Lobo are being led by Maxwell Lord and are coming to kill her—and she wants the Justice League and the Suicide Squad to protect her. In arguably the best of moment of Rebirth so far, both teams break out into laughter at her request. Being a wet rag, Batman silences them so Waller can further reveal Lord’s looking for a weapon that’ll help gain control of the world (isn’t this every bad guy’s modus operandi?) and guess what? It’s housed in Belle Reve—yes, the same place that’s protected by useless security guards. In the biggest twist yet, Waller says she believes the team capable of working together because they were the first Suicide Squad.

Justice League vs. Suicide Squad #3 allows us a breather from the nonstop action. Filled with humour and quirks, it’s an enjoyable read, even if it is exposition heavy at times. What it does really well is solidify Amanda Waller as a no-holds-barred manipulator who’ll do anything to get and protect what she wants. In a world where we have the Joker, Lex Luthor and Maxwell Lord, Waller shows she’s at the top of the food chain. I think it’ll be particularly interesting to see the interaction between the first Suicide Squad and the current one—maybe the Justice League was roped in purely to protect her from her own assembled groups teaming up on her.