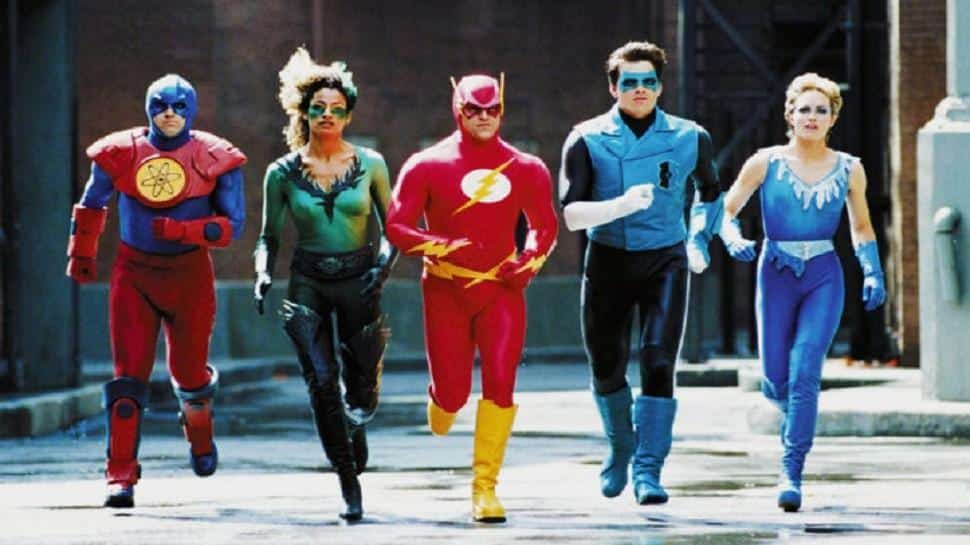 For years people used to say that Marvel couldn’t make good movies and, looking back on their older ones, there’s some merit to that statement. But DC wasn’t without its faults either. With Zack Snyder’s Justice League movie releasing soon, it’s time to look at DC’s previous attempt. After all, how bad could the Justice League of America really be?

The JLA has been through various incarnations, from the classic Silver Age line-up to the awful Detroit years but, personally, I have a soft spot for the Giffen/DeMatteis JLI run. They focused on fun and character development, using mostly second-string League members. In its day it was hugely popular and one of DC’s best-selling titles. Unfortunately, DC also tried adapting that format into a TV show and made a pilot movie. But why didn’t it get picked up as a regular show? Let’s find out… 00:00:07 It’s an interview with JL member Ice, identified here as Tori Olafsdotter. Tori? Shouldn’t that be Tora? And she’s American now? So that’s how this is going to be…

00:01:27 Justice! League! Of America! After the dullest credits sequence ever we’re introduced to the boring city of New Metro and lots of dull clouds. It must be contagious.

00:02:25 At least we’ve got Miguel Ferrer to liven things up in this! He was the voice of Weather Wizard in the JL cartoons. And gee, he’s a creepy meteorologist called Dr. Eno in this. Anybody else see where this is heading?

00:08:10 Is it even worth mentioning Beatriz DaCosta wearing a giant banana or Ray Palmer looking like a reject from Revenge of the Nerds? Barely.

00:09:55 It’s go-time for the heroes, as evil villain The Weatherman (hmm…) sends a storm through New Metro. Thankfully Green Lantern saves one child, Fire saves a couple of workmen, the Flash runs around and the Atom, um… rescues a cat. By yanking on its tail.

00:11:14 While the Flash is complaining on screen, I’d just like to do the same and explain that their costumes don’t look right. Their roster (based on their costumes) are Worst Cosplay Flash Ever, Turquoise Lantern, Fashion Disaster Lass and Atomic Padded Styrofoam Costume Kid. The original TV Flash looked better, and so did the movie Green Lantern. Even that set photo from Suicide Squad looks better than this.

00:21:20 None of our heroes can fix a TV set, so the repairman has to visit. Using a stick of gum and the silver foil wrapper he sorts it out, even giving this repair method a cute, memorable name. Gee, I wonder if that’ll come up again? 00:24:07 So Ice gets drugged, kidnapped and interrogated by the League. Nope, nothing wrong there.

00:30:54 The evil Weatherman makes it hail in the town square, but Guy Gardner is on hand to create an umbrella for his girlfriend. The Atom and the Flash stand by doing nothing while Fire gets rid of the storm. What a team!

00:37:18 It’s Mission: Impossible time for our heroes. That basically means they’re undercover at a party, and goofy Barry Allen is enjoying the buffet table while pretending to be “an archaeologist” because it’s the only scientific-sounding word he can think of.

00:41:40 Worse, the Atom just did a limbo dance underneath a security laser beam. To music. Suddenly Brandon Routh just got even cooler…

00:47:23 Based on obviously misleading information, the Flash just tried performing a citizen’s arrest on Dr. Eno’s assistant. The sight of a pudgy Flash in a bad costume rummaging around in a cardboard box is embarrassing.

00:56:25 Well, it’s time to take Tori off to Justice League headquarters. This involves our heroes in full costume walking around the bay area in plain sight before entering a secret door that doesn’t seem to be locked.

00:57:20 After an elevator ride they arrive inside an… undersea alien submarine? A spaceship that’s hiding in the murky depths? Your guess is as good as mine.

00:58:03 J’onn J’onzz introduces himself, after having shapeshifted into Dr. Eno. Since Tori knows that Eno is the villain, that may not have been the smartest way to not freak her out. Nice work, J’onn.

00:58:20 “I met Leonard Nimoy once,” Tori blurts out when asked if she’s ever met an alien before. At least she hasn’t pointed out J’onn’s resemblance to an overweight green potato.

01:00:50 Beatriz DaCaosta’s creepy stalker has just seen her as Fire on a news broadcast and realised who she is, based on her civilian earrings. Since she doesn’t wear a mask and looks the same whether she’s in her superhero costume or not, this guy’s no Sherlock Holmes.

01:03:30 Tori happily recounts a tale of freezing the Atom into an ice cube and putting him in a friend’s drink once. This is after he’s just given her a speech about how they can’t tell anyone about their secret identities. Subtle.

01:05:39 This isn’t a plot point or anything, but it looks like the Flash can’t really walk in his costume. Just an observation.

01:10:18 Despite the city being held to ransom, our heroes take a time out to convince Bea’s creepy stalker that she isn’t a superhero. J’onn’s a shapeshifter so it’s easy. What isn’t easy is hearing him say that Fire’s costume chafes his unmentionables.

01:10:34 Tori is trying to track down Dr. Eno when by chance he shows up on her doorstep! But rather than using her powers to stop him properly (or even calling in the Justice League, or the police), she runs away. Impressive stuff.

01:13:39 Oh, that sneaky Weatherman has tried frying the JL headquarters. What could save them? Only the TV repairman’s gum-and-silver-foil trick! Guy Gardner really needs to reconsider how impressive his GL power ring is.

01:16:31 There’s a tidal wave about to hit New Metro City! Don’t get your hopes up, because the action consists of the Flash saving three kids and Guy Gardner creating a chainsaw with his ring. Neither of which does much good in any way but it’s still better than Fire and the Atom, who fly about doing absolutely nothing. It’s up to Tori now!

01:16:50 Which she does, instantly. Hooray! A hundred residents of New Metro City are saved!

01:17:40 It’s the epilogue, and Tori gets a visit at home from the Justice League. She tells them to go away, so the heroes decide to break in.

01:18:50 Not only that but then they practically guilt-trip Tori into becoming Ice, their newest member. “You can’t say no!” Fire tells her. Uh, she can if she wants to. No means no, remember that.

01:19:31 Tori wants to know what would have happened if she’d said no to their “offer”. The Atom’s warning is pretty clear, and suddenly they look even less like heroes than ever before.

01:21:50 Our heroes take one last walk in costume towards us and it’s painful to watch. Ice seems to walk like John Cena runs, which is about as graceful as a brick in a blender. None of them are doing their fans any favours. Still, at least it’s over…

1997 may not seem like that long ago, but after a bit of a peak in the early ’90s DC had really lost the plot in adaptations. It’s easy to say this was a fluke, but since both Steel and Batman & Robin came out the same year you know it wasn’t. The idea of a superhero sitcom does have merit (look at The Tick), but would it have been so tough to have the characters look and act the way they did in the comic books?

As an action show there’s no action and, as a comedy, it isn’t funny. As a representation of the comic books, it’s woeful. It isn’t the worst thing DC ever did, but there’s a reason they’ve tried burying this. Oh, and wait… what’s with the music in this? Maybe I’m wrong but it doesn’t sound like an original score either. I’m sure I’ve heard that music in other films before this. Yes, it’s a cheap production – you can tell that from the costumes – but couldn’t they at least have tried to make something good?

All of that being said, Justice League of America isn’t hard to watch. Also, it makes for a great drinking game (if that’s what you’re into). It’s just embarrassing really, like watching some cosplayers with a camcorder making a home movie. Oh, if only that was what it was. Instead, it’s another sad walk of shame for DC and we’ve just got to hope that they get it right next time. I mean it couldn’t be worse, right..?