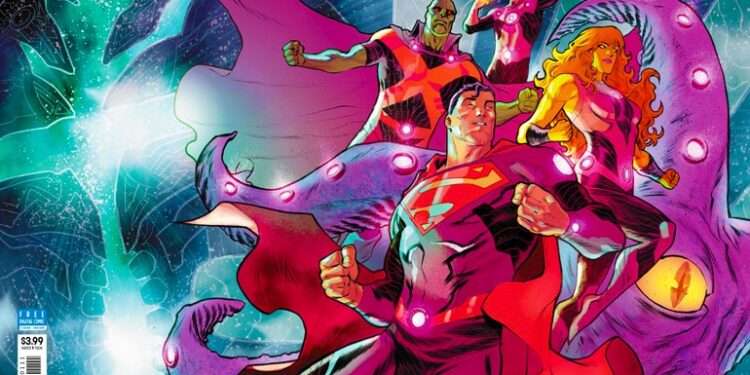 If you need to take a break from Infinity War re-watches in your local cinema and want another world-threatening cosmic story to get stuck into instead in your own home, then Justice League: No Justice may just be the earth-shattering tale for you. Fun, full of high stakes and featuring plenty of interesting character interactions, DC’s latest event miniseries is off to a monumental start. After defeating most of Earth’s greatest teams (including the Titans, Young Titans, Justice League and Suicide Squad) in easy fashion, Brainiac recruits these very heroes in order to battle a much larger threat. Using his genius to show them how weak they currently are compared to their threat, but how much better he can make them, Brainiac forms new teams of core energy to fight the four brothers that are set to destroy his home world and Earth. The four energies (entropy, wisdom, wonder and mystery) set up the basis of these teams and lend themselves therefore to interesting character team-ups.

Robin and Martian Manhunter, Harley Quinn and Zatana, there are numerous intriguing character interactions that are at the heart of this tale. Where most of the fun can be found is not on the very limited action of this first title, but in the character moments that we find when this diverse set of people thrown together. The inclusion of some villains as well, to show the danger this poses to Earth and potentially the multiverse, was a great touch and continued to make this miniseries feel important. Furthermore, Brainiac’s position of the wise leader was overplayed so much that Amada Waller’s physic attack was all the more impactful. It is likely that Waller will continue to play heavily into this story, a grounded subplot that is continuing to add stakes to an out of this world adventure. The only part that could go awry as this narrative continues to roll on is how well developed these eternal threats are. Martian Manhunter already alluded to this being a children’s tale told across the galaxy, so whether there is more to this legend remains to be seen.

Some sharp writing by Snyder and some really powerful art lends itself to a better title in issue number 1 of Justice League: No Justice. Not only does this perfectly set up what’s to come, but it also did not feel like an issue purely designed as an expositional piece. This felt like the starting chapter of something big and I’m thoroughly looking forward to seeing where it goes.