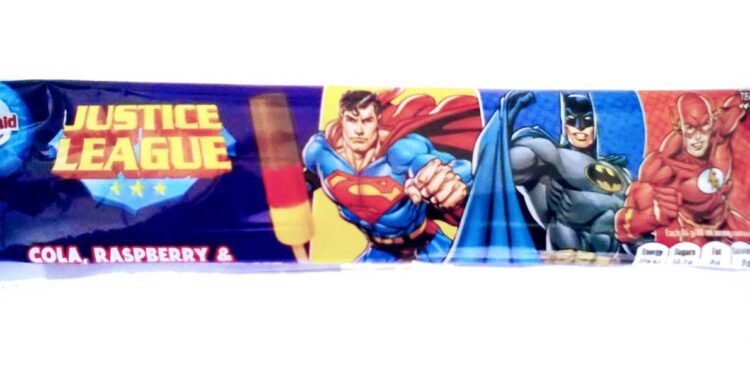 For the long, hot summer, there’s nothing better than a refreshing ice cream or ice lolly to cool down with. But how does the official Justice League ice lolly hold up?

Honestly, it’s a bit of an odd one. The packaging is gorgeous, featuring the Justice League logo and classic images of Superman, Batman and the Flash.

Apparently, these figures represent the three colours of the ice lolly itself: yellow, brown/black and red. How they got yellow as Superman’s colour is a mystery, although at least it isn’t purple grape for Green Lantern.

The “flavoured ice” is a cone of three tastes, cola at the top, raspberry in the middle and passion fruit with pineapple at the bottom, although the bottom raspberry and passion/pine flavours are also inside the cola layer. Quite frankly though, unlike Batman, the cola layer sucks. It’s too weak, watered down to the point where it’s practically devoid of taste. Flash’s raspberry is a little better, although it’s the almost neon yellow Superpassion/pine layer which makes this work.

So is it worth it? Well, it’s alright but hardly spectacular. And that’s a problem.

See, as silly as this is, this ice lolly is supposed to represent the Justice League.

While Superman would argue that it’s good for their public image and Batman would loathe them being pimped out into an ice cream (then again, for those with long memories there was an awesome banana fudge Batman ’66 brand), yet it’s only the Flash that would most likely eat this. And even Barry Allen might find this a little crass, although Wally West would probably sign on to advertise it on TV if there was a paycheque involved.

For that matter, it’s probably also only former JLI wheeler-dealer Maxwell Lord who would even bother coming up with this anyway. Like Mister Miracle’s sometime manager Funky Flashman, he would be quicker to cash in on the good Justice League brand name faster than you can say “Booster Gold”. Superhero tie-ins are a good way to promote products and characters alike, that much is obvious. But would Nick Fury really drink Dr. Pepper Cherry, while Captain America would stick with the original?

Would Howard Stark really drink ginger beer, or would he rather have a martini?

I know, it’s nit-picky, but when Batman dog-tags are on the shelves and the only thing that differentiates a pair of “official” Superman sunglasses from a normal pair is a small S-shield emblem sticker on them, like this ice lolly it can leave a bit of a bad taste in the mouth.

Then again, maybe sometimes an ice lolly is just an ice lolly. Kids are going to have them anyway this Summer, so why not get a little treat knowing this is a Justice League one?

Dr. Pepper tastes the same regardless of who’s on the tin, so it’s kind of cool having a Marvel figure on it. It’s good to be a fan or a kid, because you get the best of both worlds.

Anyway, if nothing else this Justice League ice lolly is going to cool you down. And if it puts a smile on your face too, then even better.

Plus, Superman’s passion/pine is far more enjoyable than his latest film…