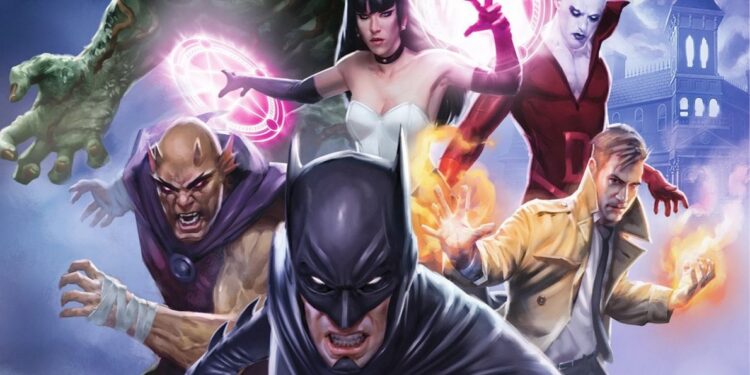 Justice League Dark is one of the strongest DC animated productions in years. The story and writing from JM DeMatteis and Ernie Altbacker is crisp, and the dialogue seems natural. The characters are accurate to their comic book counterparts, and the animation is top-notch. A woman involved in a fender-bender in Washington starts hallucinating that everyone has been turned in to demons. Similar events are happening in Metropolis and Gotham City. The Justice League suspect that these incidents were caused by mystical forces, but it’s only when Batman is contacted by Boston Brand – better known as Deadman – that he calls Zatanna and John Constantine in on to the case.

The mystery brings about the creation of Justice League Dark, the team’s roster being bolstered by Jason Blood – the host of the Demon Etrigan – and Swamp Thing. Their quest to learn the reason behind these mass hallucinations forces them to confront their own dark pasts…

That was the only review of this I’d read before watching this. One word. And, while it makes sense for critics to ignore the reviews of others so that they can make up their own minds, that one word swayed my opinion even before I saw it for myself. I didn’t expect much.

It was also wrong. Dead wrong. Some of the Swamp Thing moments show an almost Akira-like style, and it makes you wish it were a live-action movie, or that this was the pilot of an ongoing series.

Sure, there are flaws. If you want a “proper” Justice League film, you’ll be disappointed by the lack of top-tier characters. The mystery is a little obvious, and the villain’s motivation is minimal. It’s an origin story too, so that means a lot of the time is taken up with flashbacks. A cameo from Phantom Stranger and the Spectre would have been nice. Batman mostly just stands around in the background and grunts. Oh, and still nobody can pronounce “Constantine” properly.

Yet there’s some great work on display here. Matt Ryan makes a much-deserved return as John Constantine, even if just vocally, and does a superb job of making him the heroic jerk you hate to like and like to hate. Jeremy Davies returns from that short-lived show too as Ritchie. Swamp Thing is handled properly, even if his appearance is brief. Deadman is outright hilarious, while Zatanna shows herself as a powerhouse. Not only that, but Constantine’s House of Mystery plays a pretty big role too.

So what about the “Eeh”?

If you aren’t familiar with DC’s mystical side or aren’t a fan of some of their old classic tales, this may not be for you. However, if you wished for a continuation of the Constantine TV series or enjoy a more street-level slice of magic in comic book movies, you’ll love it. It isn’t “Eeh”, it’s smart, funny, action-packed, amazingly accurate, and exactly what was needed.