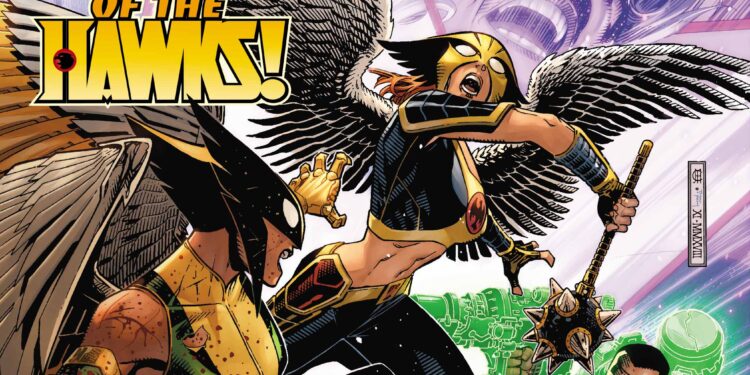 The secrets of Thanagar Prime are revealed in Justice League #15, with Hawk Girl, Green Lantern and Martian Manhunter facing the truth of the universe, perhaps at the cost of their own freedom. Back on Earth, the awoken Star Man is intense pain, screaming about the doomed universe around them. The 15th instalment of this ongoing saga doesn’t pull the punches as it leans heavily into its action set pieces and its plot twists to provide readers with an action-adventure worthy of the title’s name. 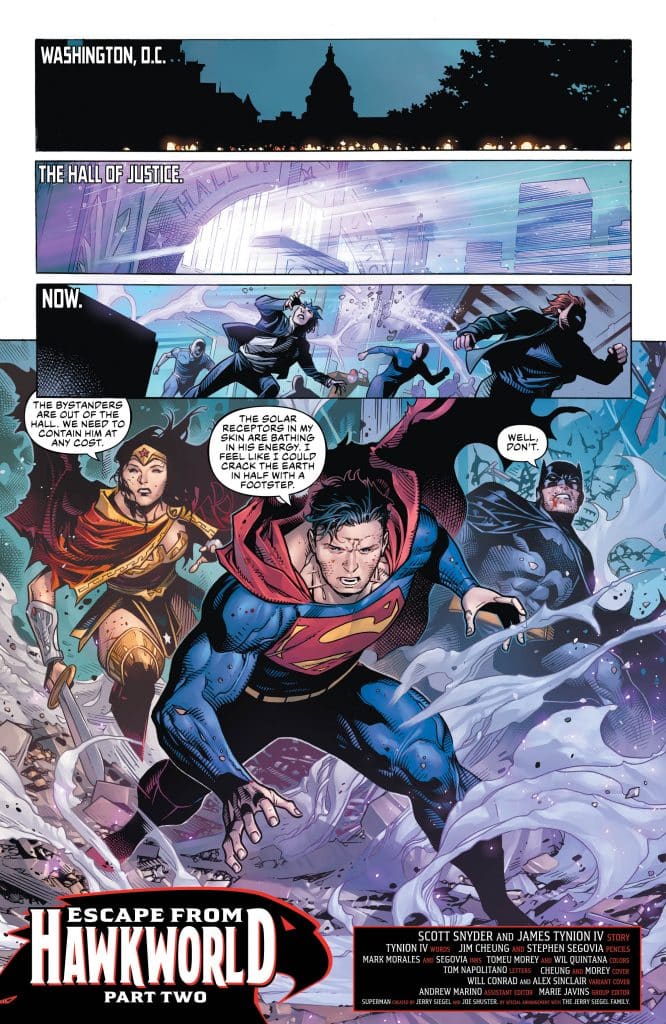 Justice League #15 starts on Earth with the unnerved Star Man. The DC Trinity are on hand to ensure that Washington isn’t destroyed in the ongoing madness. There appears to be many secrets held within the man from the stars, some of which will be revealed over the course of this issue and some that will likely be explored further in the ongoing narrative.

We then return to Thanagar Prime from the last issue, where the Savage Hawkman is about to finish off his future lover. In a twist used a few times in this issue, it is resolved through Martian Manhunter manipulating the minds of their attackers in order to escape unharmed. The trio has embarked on this journey venture to a previous hideout that J’onn used to habit in order to plan their next move.

The beautifully designed world of the Hawk people is also home to some super secure vaults beneath the planet, which hides all sorts of treasures. Setting up a heist, the trio journey into these vaults in order to uncover what the people of Thanagar Prime are hiding. Hiding in the Kryptonite of some Dominators, which was stored in the vaults, the three Earth heroes emerge from their concealed hiding spot and do battle with the guards and alien species. During this fight it is exclaimed by a Dominator that it is Earth that has endangered the rest of the multiverse and that many of the weapons within the vaults are to be used against Earth’s people. It appears that those across the galaxies are aware that there is some fault on Earth’s heroes for the state of the source wall.

Whilst searching the vaults, the Empress and Hawkman cut down their path and are being aided by the Lantern Corps. This surprise is all the more symbolic when John is about to be arrested and perhaps stripped of his ring (despite the fact he cannot remove it). Things are not right on this planet and J’onn manages to escape in the ensuing chaos to find the elder of the Green Martians. She is being used by the Hawk people to create Thanagar Prime itself. 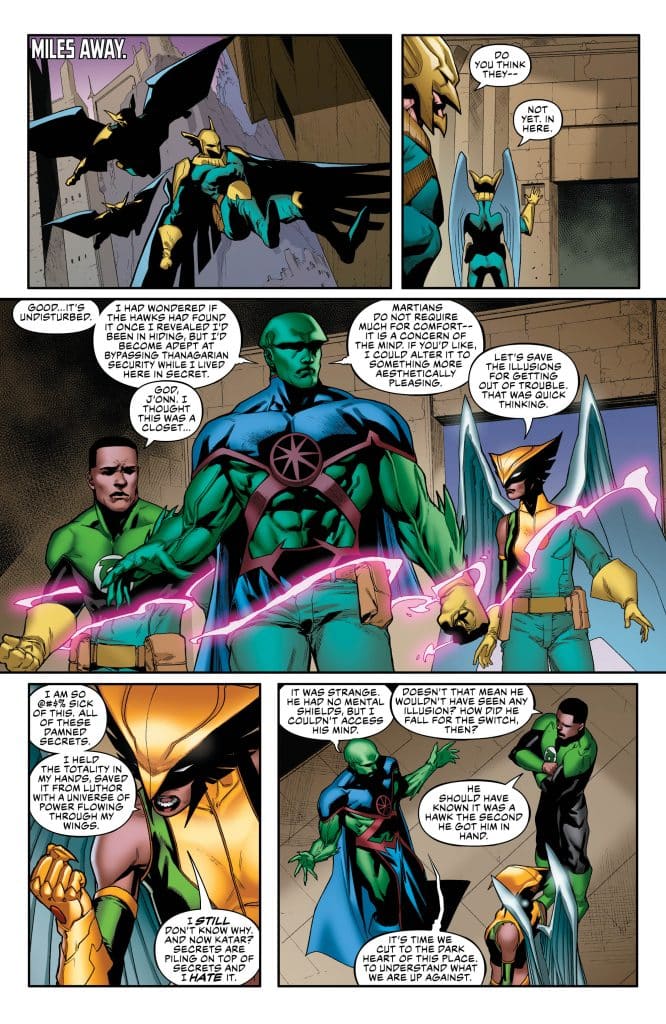 By using the Absorbascon and her knowledge of their people, the Elder has recreated the planet in order to protect its knowledge of the multiverse’s greatest secret. The multiverse they are currently in was not the first and a being from the original is returning. The name Perpetua has been mentioned before and it is here again. As Star Man is calmed back on Earth, he too speaks of the same woman returning to this multiverse.

It appears that the following issue will tell us the story of Perpetua and unravel some more of the mystery. For now, this beautifully crafted artwork and accompanying action-packed story has served its purpose, answered some questions and remained entertaining throughout. Whilst not a standout in terms of character work, like the last issue, this edition sets up enough threads for the plot to remaining intriguing as Earth’s heroes continue to discover the secrets of the multiverse.

Beginning the year on a high, the beautifully created Thanagar Prime unravels new secrets about the multiverse in an exciting, action-packed adventure.