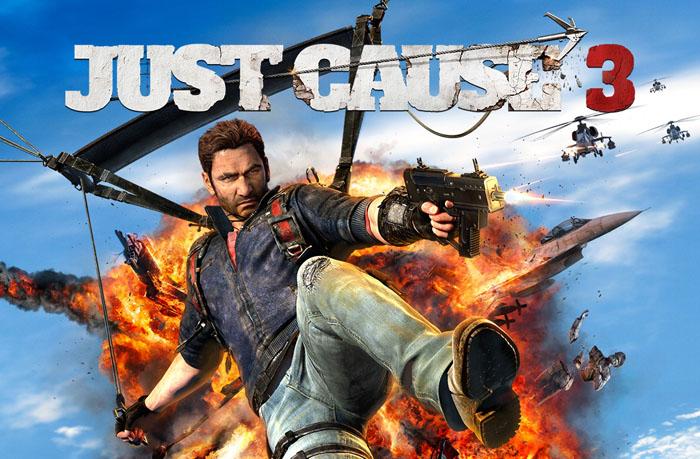 One word easily sums up Just Cause 3, ‘explosions’… lots of explosions. Avalanche Studios has taken all the fun parts that the Just Cause series is known for and added even more insane ways to cause destruction.

First off, Just Cause 3 is a great looking game. Colours are vibrant, textures look crisp and, more importantly, the explosions look fantastic.

Players once again take on the role of Rico Rodriguez, as he is on a mission to save his home country of Medici from the evil moustache twirling General di Ravello. It’s your standard cut and paste good guy trying to take down the evil dictator tale, but let’s be honest Just Cause games aren’t known for their stories, which is a fact that Just Cause 3 fully embraces. The game introduces some unique and entertaining mechanics to help you accomplish your goal which mostly include blowing things up.

One of these new mechanics (and, in my opinion, one of the best new additions) is the wing suit. Gone are the days of being stranded without a vehicle as players are now able to use the wingsuit (in combination with a more responsive parachute) in order to quickly traverse the environment. Not only does the wing suit and parachute help with traversal, but these can be combined with the grappling hook to pull off some crazy stunts. There are few things as exhilarating as driving a vehicle of a cliff, jumping out of it then using the wingsuit to glide into an enemy base, quickly opening your parachute while taking out enemies with your rifle and grenades.

It’s insane moments like these where Just Cause 3 shines. 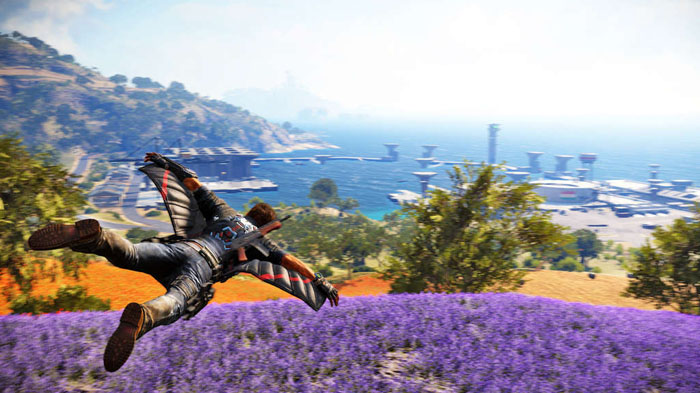 Another new mechanics is the ability for Rico to control the tension of his grappling hooks. Not only can Rico tether objects (and people) together, he is now also able to tighten the tension of the rope between these objects sending them flying into each other. An example of this would be tethering an explosive barrel to a helicopter, and then increasing the tension sending the barrel speeding into it destroying it in a glorious explosion. Not only does this new mechanic come in handy in battle, but it is also one of the main tools with which to liberate towns and villages across Medici.

Medici is a beautiful 400 square mile sandbox with environments such as sunny beaches, fields filled with flowers and even snowy mountains. It is great that Medici has such a variety of environments as it made me want to explore the country even more. Scattered throughout Medici’s provinces are villages and towns just waiting to be liberated. Liberating these towns and villages helps Rico and his team of rebels gain an ever increasing foothold in Medici. In order to achieve this Rico needs to, among other things, take down statues, billboards, and propaganda towers. Unlockable mini-missions become available as players liberate these towns and villages. These include vehicle races and wing suit challenges.

Completing these challenges unlocks mods that players can use in order to amplify or completely change the way your equipment’s such as the wing suit and grenades work. This is the only way in which to improve Rico’s abilities, which means in order to increase your effectiveness in battle you would need to complete these challenges. Experimenting with these mods was a lot more fun that I initially thought it would be as there are some really interesting ways in which to combine the different mods in order to get the desired effect.

Not only does Rico need to liberate villages and towns, he also needs to capture military bases. This is achieved by destroying strategic supplies located around these bases. Fuel tanks, power stations and communication dishes are scattered around just waiting for you to blow them up with your supply of explosives and weapons. I found experimenting with tactics when capturing these bases to be some of the most rewarding moments in the game. Even though Rico does have access to a large arsenal of weapons and equipment, capturing these bases can be difficult especially when not taking advantage of Rico’s mobility. Players can quickly become overwhelmed by large groups of enemies who just might send you back to the nearest checkpoint. Luckily dying in Just Cause 3 isn’t really frustrating as there are a liberal amount of checkpoints during missions. With such a big country to play in players not only have their wing suit, grappling hook and parachute to get from point A to point B, but a whole range of vehicles to travel across the land, air and sea as well. While on the subject of vehicles, Just Cause 3 has done away with currency, this allows players to call for vehicles and weapons almost as often as they like (provided they have been unlocked). I found that this gave me access to more available options when it came to taking on missions. If I was itching to take a tank into battle, I just had to request an air drop and within a few seconds I was tearing up an enemy base with it.

It is great that Just Cause 3 gives you all these tools to cause mayhem with and that using them is so much fun because most of the missions in the game tended to be “go there, blow that up”. This isn’t to say that these missions aren’t enjoyable, as some of them do incorporate some nice set piece moments; it’s just that some of the missions especially liberating villages could become a bit repetitive and even tedious at times.

Seeing as causing mayhem and blowing things up is such a crucial and fun part of Just Cause 3, it is disappointing that the game did have some minimal frame rate drops (on PS4) especially when destroying large objects or in cases where there were large-scale battles taking place. Another problem I experienced on the PS4 was the extremely long loading times. Most of these occurred after starting or re-starting challenges, which I found myself doing a lot as I wasn’t very good at some of these. Hopefully, Avalanche Studios is able to sort out the loading times quickly as it did dampen my fun at times.

Despite the technical issues I encountered, I did enjoy my time blowing things up and causing general chaos while playing Just Cause 3. The addition of the new tether mechanic, wing suit and a more responsive parachute just gave me more ways in which to cause mayhem. Just Cause 3’s strength lies in the “Oh man I can’t believe what just happened” moments, of which I had many. Even though Just Cause 3 isn’t a perfect game what it sets out to do it does well.