He’s been going from strength to strength in Britain since 1977, so it’s safe to say that there are a lot of people who like him. He’s also still on the fringe as a cult figure, despite being 2000AD’s flagship character and having computer games and two movies to add to his nearly 40-year comic book history… so his satirical tales of brutal fascism in a wild future world still hold up.

In this, the tenth massive volume of his collected case files, it’s is as evident as ever. It contains a selection of multi-part stories and individual progs that are bound to bring a wry smile to the faces of his fans. By this stage the workings and daily insanity of life in Mega-City One are almost commonplace, and the blend of ultraviolence and dark comedy is in its prime.

Some of the high points are the classic stories The Taxidermist (one of the few to escape the wrath of Dredd), The Fists Of Stan Lee (not Marvel’s living legend, but a martial artist), Attack of the 50ft Woman (can Dredd’s long arm of the law stop her gigantic rampage?), The Phantom Of The Shoppera (the title should say it all) and The Comeback (in which a Michael Jackson-style superstar gets resurrected as a zombie for the best rendition of Thriller ever). And, of course, there’s quite possibly the finest Christmas story ever presented in 2000AD. Picture Christmas in Mega-City One. You’d imagine it being something mad, but it’s actually warm, sweet and beautiful. In one of the best displays of metafiction, even the narration admits how boring that is and the writers quickly set to work changing things. A kindly street-corner Santa gets instantly transformed into a raging lunatic with a steel claw hand and has a glass plate materialise in his forehead so that we can see his brain sloshing about.

Why would the comic book writers make this happen? Because they can, even if Judge Dredd and the residents of the Big Meg don’t understand the forces at work here. It’s a stunning display of creativity, and one of the funniest things you’re ever likely to read. They even give Dredd himself a happy ending, even if it makes no sense whatsoever, just because it’s Christmas.

Unfortunately, not every story works in this collection and you’ve got to take the rough with the smooth. Varks is a story which never quite made an impact, although the real let down is the inclusion of the too-long, too-dull Atlantis saga.

Still, with over 45 progs of stories on display from writers Alan Grant and John Wagner, and art from Cam Kennedy, Ian Gibson, Kevin O’Neill, Steve Dillon and more, it’s a great collection. It has just about something for every Judge Dredd fan out there. Even Judge Anderson and Max Normal make cameo appearances, but then you’d expect nothing less from the galaxy’s greatest comic. 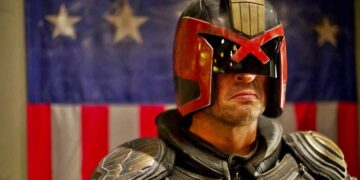 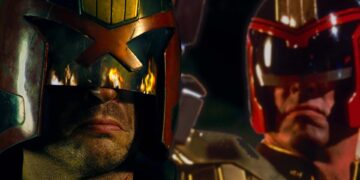