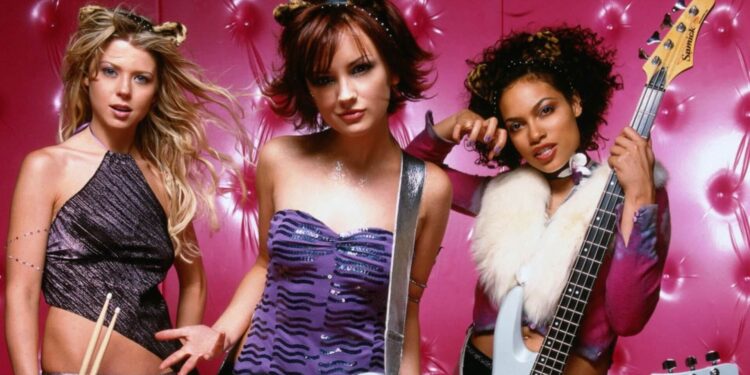 Call me irresponsible, call me unreliable, throw in undependable too, but… I happen to like Josie And The Pussycats. The movie was based on the completely inoffensive Archie Comics series about an all-girl band, so like it or not it’s a comic book movie. It also threw those old comic books out of the window and subverted expectations, in much the same way as modern Archie comics and the Riverdale show do now. But back then it was pretty revolutionary, and it’s a sneaky little film in its own right which gleefully displays an anarchic, fourth-wall-breaking attitude.

The story starts by focusing on clueless corporate-manufactured boy band Du Jour – the name being a smart joke in its own right. Du Jour start suspecting that the company who manages them, MegaRecords, is putting evil subliminal messages in their songs. It’s a dastardly plan of some kind, but they’re too stupid to realise it and soon they meet with an “accident”. MegaRecords, however, needs to find a new act to use in their diabolical schemes, and so they discover the struggling pop-rock band Josie And The Pussycats. Josie’s the girl-next-door and as cute as a button, bandmate Valerie is tough as nails, and their drummer Melody is… well, she’s not too bright but she has a big heart. MegaRecords takes Josie and the Pussycats to New York to gear up the marketing machine. Despite Josie and her friends being creeped out by the insanity and suspicious of their overnight success, they figure that it’s best to just roll with it. However, Josie’s relationship with potential boyfriend Alan M fails to get off the ground, and her friendship with Melody and Val falls apart due to the subliminal messages. Can they get it together in time to stop MegaRecords more-evil-than-evil boss Fiona? Can they put on a real show and prove their musical worth, instead of being just another plastic band? Of course they can. But can a lesson be learned in the process?

Sadly, Josie And The Pussycats tanked at the box office and came in for flak from the critics of the time. Yet the jokes are sly, funny, and at times far more crude than you’d imagine. The satirical digs at product placement and the music industry are about as subtle as being hit in the face with a brick, and that’s just fine. Some people still complain to this day that the amount of product placement in the film is hypocritical, but to my knowledge none of it was paid promotion. Every brand represented in it (and there are a lot) is being mocked, making them the punchline to a scathing anti-corporate joke.

The performances in Josie And The Pussycats are great too. Rachael Leigh Cook as Josie is fun, Tara Reid as Melody delivers her comedy lines with perfect timing, Rosario Dawson is… well, she’s Rosario Dawson and that should be enough for anybody. Plus there’s the hilarious Missi Pyle and Parker Posey stealing the scenes as the snarky Alexandra and villainous Fiona respectively, as well as cameos from folks like Seth Green and Eugene Levy. It’s true that the plot is pretty thin and ultimately goofy, the characters are mostly one-dimensional, and the film’s more serious statements are played for laughs at times. That doesn’t make those statements any less valid, and the message of the shallow nature of fame in a world influenced by corporations holds up regardless. This is a satire, and a rather twisted one at that. It breaks the fourth wall regularly, the villains are ridiculous, and the nature of trends is mocked mercilessly. The film practically oozes cult appeal. Even the songs are catchy, in a bubblegum sort of way, and there’s possibly the best Metallica joke of all time in the film too.

Basically, it’s Deadpool meets Austin Powers… something all the more surprising given the source material. It’s smarter than many give it credit for and a whole lot of fun, but like with those other two films you’ll either love Josie And The Pussycats or hate it.