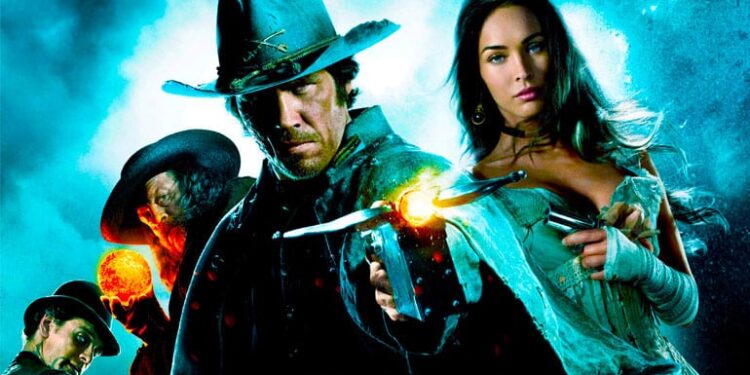 With Josh Brolin getting double-duty Marvel movie work in the upcoming Deadpool 2 and Infinity War, it’s time to roll back the clock and remember his time in a DC film. Much like his Deadpool co-star Ryan Reynolds – who appeared in the dismal Green Lantern film – Brolin starred in the lead role in a DC film that many wish had never been made at all: Jonah Hex. But was it really that bad, or should it be considered for some kind of cult status? Opening with a decently animated intro sequence to explain Hex’s backstory, it then gets down to business. Set in the good old days of cowboys, it’s whoopin’ and hollerin’ time as rebellious bounty hunter Jonah Hex gets drafted by the military to track down his arch-nemesis: stock villain Quentin Turnbull, the man who killed Hex’s family. Turnbull has built a cannon which fires atomic bombs and is planning to destabilise America by killing the President.

What Turnbull didn’t count on was Hex and the bounty hunter’s ability to temporarily raise the dead… briefly. Hex wanders around the old West, getting into various scraps, adopting dogs and questioning dead people for information. Tracking down leads and dishing out some old-style justice, he saves the day and rides off into the sunset… to some clanging heavy metal country music.

On the surface, that may sound pretty decent and credit where it’s due, it looks it too. It’s got a decent cast, including John Malkovich, Michael Fassbender, Michael Shannon, and even Arrested Development’s Will Arnett. It’s based on a cult comic book series, and Jonah Hex is certainly worthy of more recognition from the general public. Crank’s renegade filmmaking duo Neveldene/Taylor worked on the script, and it had a wry sense of dark humour to it at times. So what went wrong? Why was it received by critics like it was Waterworld III: The Ishtar Connection?

The problem is that when you look beyond the surface, there’s nothing much there. I’m not saying that the action is bad, because it isn’t. I’m not knocking the performances either, and Josh Brolin made a damn cool Jonah Hex. But when a comic book film clocks in at a measly 81 minutes running time, you know something’s wrong. While the script takes some of the best elements of the Jonah Hex comic books, it also mixes in some of the worst and then tries to set it in a Wild Wild West mould with a slight Hellboy vibe. It’s a film that looks like it’s scrambling to work out what it is, uncertain if it should be a PG adventure movie or an R-rated badass action flick. By the end it still doesn’t know, making the music in the end credits sound like a bad parody of Ghost Rider. It only cost $47 million to make too, yet made less than $11 million back at the box office.

You’d think from how it got hammered by the critics and the fact it got a dishonourable mention at the Golden Raspberry awards, that it was the worst comic book movie ever. That’s wrong, and it certainly isn’t in the realms of Howard the Duck, Superman IV: The Quest For Peace or Fant4stic. Yes, it requires a viewer’s brain to be switched off so that they can succumb to a series of action scenes punctuated with stretches of rather bland exposition. But is it that bad? No… but that doesn’t make it good either.

Why the film studio chose a little-known character like Jonah Hex for a film but then didn’t really support it is a bit of a mystery… but it’s a fair assumption that – as usual – they wanted to save their focus for the better-known mainstream characters who would get bigger films. Which, based on Justice League and BvS, hasn’t exactly yielded the best of results. Maybe it’s time to treat DC’s cult characters like Jonah Hex a bit better on screen. After all, didn’t anybody learn anything from the Constantine movie? It’s unfortunate that Neveldene/Taylor weren’t allowed to go full throttle on this film both in the script and maybe even behind the camera too, because they could have given it Deadpool-level intensity.

I wouldn’t recommend seeing Jonah Hex unless you just fancy a brief bit of fun to watch after a few drinks. If you do then it has some great set pieces and solid performances, even if it’s far from being any kind of masterpiece. And if you don’t like it, then at least it’s over quickly. For what it’s worth, Jonah Hex is a great character who deserves more exposure and it was great seeing him get the limelight, even if only briefly. Josh Brolin plays him just right, but he deserved a better script and a better comic book movie to be in. Hopefully, Marvel’s ones will fix that…