by  Staff Writer
in Sneakers 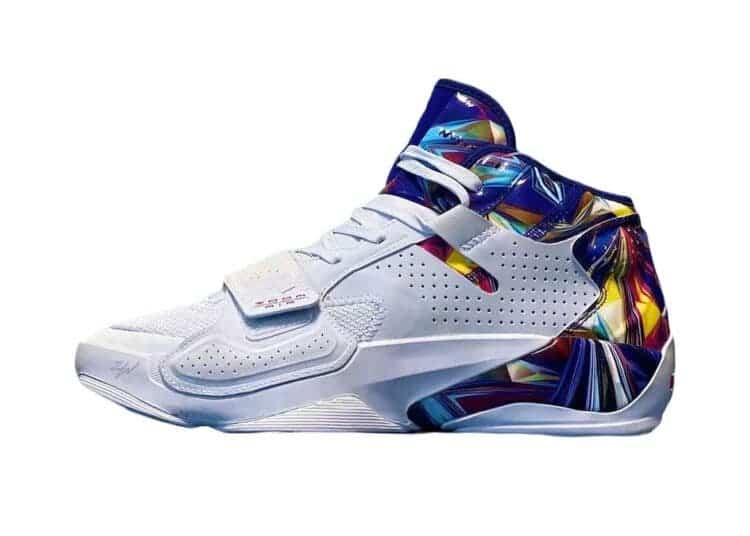 Even though Zion Williamson has yet to set foot on the court during the 2021-2022 NBA season (due to a nagging foot injury), the New Orleans Pelicans star player’s footwear line continues to expand with a second signature sneaker, the Jordan Zion 2.

With its retro aesthetic, Zoom Air forefoot straps (confirming the cushioning used) and psychedelic details (on the tongue, ankle, and heel areas), the Jordan Zion 2 (which was spotted during Williamson’s practice sessions) is clearly inspired by 90s basketball shoes. Predominately constructed out of white leather, the sneaker features a mid-cut upper very similar to its predecessor, the Jordan Zion 1 — which was described as “light, stable and strong, with aggressive traction to help Zion grip the court and control his power.”

As is custom with signature Jordan sneakers, Williamson’s logos also appear on the tongue and at the toe of the Jordan Zion 2.

Zion’s first sneaker release, the Zion 1, was revealed in four different colourways — including a style dedicated to his younger brother, Noah. “We knew that one of Zion’s main inspirations for the look of the shoe was superhero armour. But when we thought about an icon or symbol that could clearly draw out the shoe’s benefits, the ‘Z’ made perfect sense to us,” Jordan Sport senior footwear designer Vianney de Montgolfier said about the Zion 1. “It’s the letter for speed, it has the base for power, and it’s maybe the most distinguishable letter in the alphabet. There’s nothing else like it.”

Personally, the upcoming Zion 2 sneaker reminds me of a mix between the AND1 from the mid-2000s and Dada supreme sneakers.

The sad news is that Nike and Jordan have yet to set a release date — although many outlets are reporting the Jordan Zion 2 sneakers will debut in June for around $120.