Johnny Depp and Amber Heard first met as co-stars on the set of The Rum Diary back in October 2009. The pair were cast as love interests in the film adaptation of the Hunter S. Thompson novel. A bunch of protection orders and a divorce later, Depp is now suing The Sun over an article which called him a “wife-beater” and referred to “overwhelming evidence” that he attacked Amber Heard.

The actor has repeatedly denied physically assaulting Heard during their four-year relationship and is claiming damages from the paper and its executive editor, Dan Wootton.

During the first day of the trial, court documents claimed that Johnny Depp referred to the jealous and controlling side of his character as “the monster”, blaming his “illness” for the violence and abuse he inflicted on his former wife.

The Hollywood star is accused of subjecting Amber Heard to instances of violence during their two-year marriage, in which he allegedly punched, kicked and slapped her, dragged her by the hair and threatened to kill her. Although the claims of torment inflicted on Ms Heard are said to have occurred even before they married in February 2015. 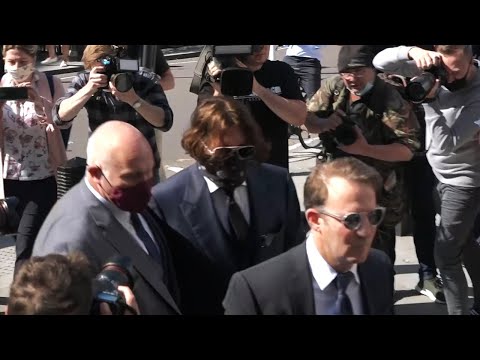 The High Court on Tuesday heard details of Mr Depp’s drug use – which began “at a very young age” when he took one of his mother’s “nerve pills” – with the star forced to admit in the witness stand that he took cocaine and other drugs with the British actor Paul Bettany, described in court as his “drug buddy”, and Keith Richards, his favourite guitarist.

In an opening statement submitted to the court, NGN’s barrister Sasha Wass QC, said: “The claimant [Depp] beat his wife Amber Heard causing her to suffer significant injury and on occasion leading to her fearing for her life.”

Ms Wass said the actor was not prepared to accept that Ms Heard did not want to “play the role of a supplicant consort”.

“Disputes between the two increasingly arose where Ms Heard’s professional life clashed with Mr Depp’s desire to dominate the relationship,” said Ms Wass, adding: “These conflicts manifested themselves in arguments where Mr Depp became abusive and aggressively jealous, on occasion falsely accusing Ms Heard of having sexual relationships with her co-stars.”

However, in a writer court statement, Depp said, “These sick claims are totally untrue” adding that Heard’s allegations hurt his career and had “been a constant issue in my casting.”

He told the court that Heard had “said to the world that she was in fear of her life from me, and I had been this horrible monster, if you will. Which was not the case.”

The Sun’s defence relies on Heard’s allegations of 14 incidents of violence by Depp between 2013 and 2016, in locations including Los Angeles, Australia, Japan, the Bahamas and a chartered jet.

Depp denies them all and says Heard attacked him with items including a drink can and a cigarette. He also claims that on one occasion Heard or one of her friends defecated on his bed. Heard is due to give evidence later in the trial.

Depp’s lawyer, David Sherborne, said Heard had recently asked that one allegation be heard in private “because of its supposedly horrific nature.”

Witnesses for Depp are scheduled to include his former partners Vanessa Paradis and Winona Ryder.

Johnny Depp is also suing Amber Heard in the United States for $50 million for allegedly defaming him in a Washington Post article about domestic abuse. That case is due to be heard next year.

In his opening statement, Sherborne said that the actor had sued The Sun to clear his reputation. “This is not a case about money. It is about vindication”, he said.

Earlier this year, the hashtag “Justice For Johnny Depp” was trending on social media. Many fans are calling for Amber Heard to be removed from Aquaman 2.

Sources The Telegraph and ABC News