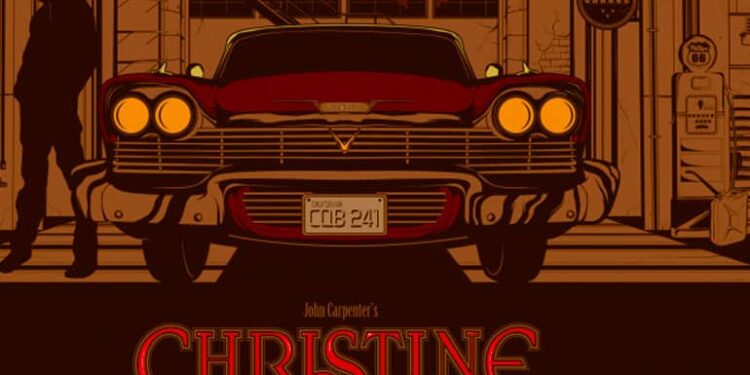 When it comes to iconic cars in films and TV shows, some stand out: KITT, the Batmobile, the A-Team van, the time-travelling DeLorean… and, if you noticed all the Easter eggs in Ready Player One, the 1958 Plymouth Fury known as Christine. That car was a death-trap on wheels, but not because of bad handling and worn brakes. Oh no. If you read Stephen King’s book Christine or saw the film adaptation from John Carpenter, then you know why.

Now, Stephen King film adaptations have always been a hit-and-miss affair. Sometimes they’re brilliant, like The Green Mile or The Shawshank Redemption; Sometimes they’re good, but too long to adapt faithfully in to just one film, like IT; And sometimes they’re just plain awful like Dreamcatcher. Christine rolled off the production line a little… differently… than the others. This bright red speed demon’s hood slammed shut on one factory worker’s hand and killed another even before it got out of the factory doors. She’s got a lethal mean streak.

After this brief intro, the story fast-forwards twenty years to focus on high school nerd Arnie Cunningham and his jock friend Dennis. Arnie isn’t a bad kid but he’s bullied by everyone, from switchblade-carrying auto-shop jerks to his parents. When he spots Christine rusting in a driveway with a sign saying she’s for sale, he’s advised against buying it by Dennis, who senses a scam. Still, Arnie sees her potential and is convinced he can restore her to her former glory.

Christine and Arnie both undergo transformations during this restoration period. Arnie becomes a psychotic 1950s-style rock ‘n’ roller, while Christine is worse, and their relationship appears to be symbiotic. Christine becomes a devastating vehicle of destruction, killing those who stand in Arnie’s way… or is it Arnie behind the wheel? The car clearly has a life of her own in some way, even restoring herself whenever any damage is done, but behind her tinted windows could be anyone – or no-one.

It’s up to Dennis to battle the V8 monster, but is it possible to kill something which shouldn’t even be alive?

While the film isn’t 100% accurate to the book, it’s pretty damn close. The acting is more than passable, the script is outdated and filled with profanities but the story moves forward at a steady cruising speed before accelerating to a damn cool climax. The effects, few as they are, still look surprisingly realistic even after all this time… and without the benefit of CGI. The score is just what you’d expect from a John Carpenter film (tense and atmospheric synth work), peppered with sly tongue-in-cheek ’50s rock ‘n’ roll songs which capture Christine’s mood at the time – such as Little Richard’s Keep a-Knockin’ (but you can’t come in) when the car doors refuse to open. It’s also one of the best-directed films by Carpenter, and there’s a focus on creepiness over outright gore.

With so many positives, it’s unfortunate to add that the film isn’t a classic.

Woah, hold on, before you hate me for saying that… it’s certainly a very good film, almost a great film in fact, and like so many other Carpenter films it’s a gem in its own right. It still holds up far better than most horror movies today. It’s easily watchable, just as enjoyable now as it was when it first came out, and it hasn’t gotten any worse over time in any way.

That being said, Christine hasn’t gotten any better either, and that’s what makes a classic. Even if it’s one of the best King film adaptations out there and still looks pretty fresh, it isn’t the classic that Christine herself is. That car is haunting and timeless, and she just gets better with age. Christine is easily one of the most iconic and beautiful cars ever seen on the big screen, and it’s hard not to fall in love with her sleek looks and pure power. When she was made she was one of the fastest and most advanced cars of the time…

And if you don’t respect her, then you’re in trouble.