“It was a really dark story in which Deathstroke dismantled Bruce’s life from the inside out.” 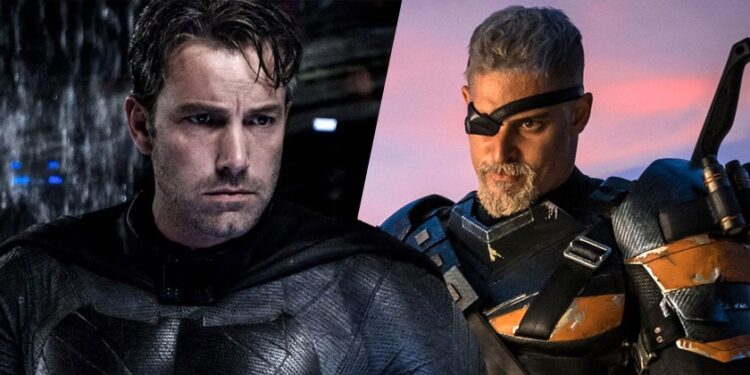 Its common knowledge that Justice League was supposed to lead into The Batman, a movie in which Ben Affleck’s version of the superhero went up against Joe Manganiello’s Deathstroke.

Affleck planned to co-write and direct the film too, but decided to ditch the project and the role in early 2017. After he stepped away, Matt Reeves created his own unrelated vision of The Batman with Robert Pattinson starring as the Caped Crusader.

Although Affleck’s film never materialised fans have always wondered what it would have been like. And thanks to Joe Manganiello, we finally have a better idea of the plot and tone of the scrapped movie.

In an interview with Yahoo Entertainment, Manganiello explained that the story would have focused on Slade Wilson’s plot to systematically destroy Bruce Wayne’s public status as Gotham City’s leading citizen and his secret existence as Batman.

“It was a really dark story in which Deathstroke was like a shark or a horror movie villain that was dismantling Bruce’s life from the inside out. It was this systemic thing: He killed everyone close to Bruce and destroyed his life to try and make him suffer because he felt that Bruce was responsible for something that happened to him.”

The actor also revealed that Deathstroke’s Justice League cameo with Lex Luthor was originally meant to set up that plotline. But the scene’s dialogue was altered during Joss Whedon’s reshoots.

“They reshot all of [Jesse Eisenberg’s] dialogue to tease Justice League Part 2, which was going to be about the Injustice League. All of that dialogue was about Batman originally, and it was changed to lines like ‘Shouldn’t we have a league of our own?’”

Although the movie was permanently shelved, Deathstroke will be back in Zack Snyder’s Justice League. Manganiello will appear in brand new scenes and hopes to eventually star as Deathstroke in his own movie.

“We landed on an origin story that everyone I’ve ever pitched it to, has gone crazy for. There’ve been so many versions of this character over the years. And I just wanted to put my own stink on him.”

Would you have prefered to see Joe Manganiello as Deathstroke face off against Batman in Ben Affleck’s abandoned Batman movie? Let us know in the comments.