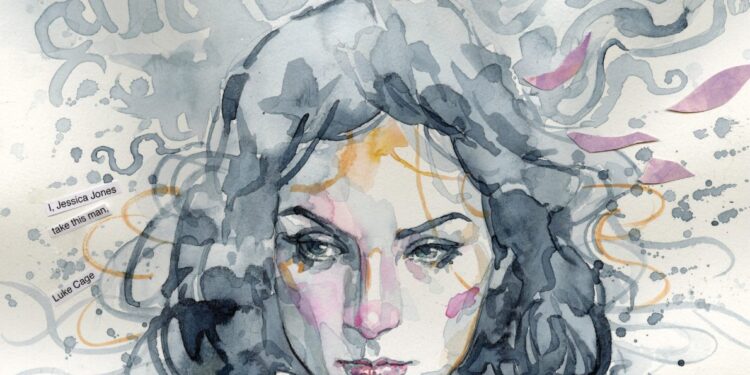 When this storyline first started, it was something which raised the eyebrows of many readers. The Marvel Universe has changed so dramatically in recent times, and if current news stories are to be believed then it’ll be changing again very soon. As their Distinguished Competition once said, worlds will live, worlds will die, and nothing will ever be the same again. While this storyline may only be a small cog in Marvel’s big machine, it’s a vital one. We review Jessica Jones #5. It’s time for Jessica Jones to learn the truth, but is she ready to hear it? Sophie Brownlee, Jessica’s latest client, claimed that her husband believed he was from an alternate reality. Now, Sophie is dead, her husband having sliced her neck open and drunk her blood. But why? As he slowly gives his confession, Jessica begins to question the world she’s living in, because she knows he may be right.

Meanwhile, Jessica’s estranged husband Luke Cage continues his quest to find their daughter, but first he needs to stop by the Daily Bugle and raise some hell. However, he’s taught a lesson in self-restraint, tabloid news and click-bait journalism by Ben Urich, who knows the news game inside-out. As for Jessica, already on the edge as her life continues to fall apart, the time has come to make an important decision…

It may not seem like it, but this issue has been a long time coming. And that’s a good thing. After all, what happens to the normal people who get caught up in these cosmic events? We know all about the heroes but, when it comes to the average person, nobody ever seems to care.

Since this is Jessica Jones, things here are grim and it’s almost hard to link this story to the rest of the Marvel U. If anything, it almost feels like it’s going through the motions at times. But scratch beneath the surface of the story and you’ll find this almost as disturbing as the Purple Man storyline in the original Alias series.

Likewise, Luke Cage’s life lesson comes across as a much-needed break in the main narrative, and it’s a solid enough piece of work which stands on its own too. While Luke hasn’t exactly been out of control lately, his character does have to learn to rein himself in. Plus, there’s as much said about the dark side of modern journalism as there is about celebrities fueling the tabloid headlines.

The pacing on this series, and indeed this series itself, may not be to everyone’s tastes. But once again Jessica Jones is proving that this series marches to the beat of its own drummer, and doesn’t need to apologise for that. Jessica Jones #5 is dark, intriguing and intense, and well worth picking up.