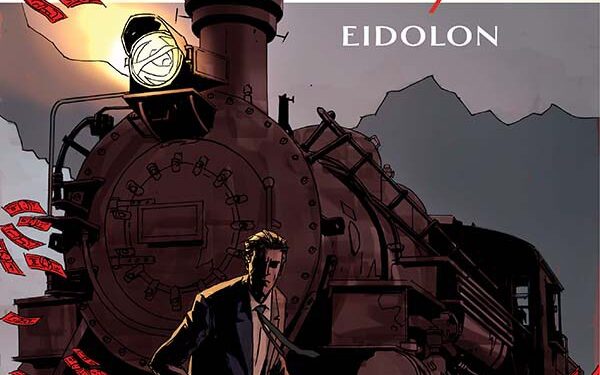 The third issue of the James Bond Eidolon storyline brings more espionage intrigue and more action to the table, as 007 does some authorised unauthorised investigating. [dropcap]A[/dropcap]fter the attack at Heathrow Airport, MI5’s Eve Sharma pays MI6 a visit. The head of MI6, M, is civil but wary and with 007 and Bill Tanner on hand to protect him, it’s a tense situation. They’re once again reminded of bureaucracy and red tape which means that the case is an MI5 matter and they need to back off from the case. Meanwhile, forensic accountant Cadence Birdwhistle has found evidence which points to Britain’s underground Box Tunnel as a possible source for the syphoned military funds.

Bond, acting with M’s approval but off the record, is equipped by Major Boothroyd at Q Branch with some of the most basic weapons and sent to investigate. Yet what he finds there is more than he expected. The Box Tunnel – a repository of old files and the SR Fleet of trains to be used in case of an EMP attack – is not only active but being operated by the mysterious shadow organisation Eidolon… This story continues to be elegant in its simplicity, telling a classic spy thriller which cherry-picks all the right elements of the Bond mythos and real-life espionage. This issue relies more heavily on art than dialogue as it goes on, since Bond’s mission requires stealth above all else, but the storytelling continues to excel. The tension rises considerably as this issue reaches its climax, especially since we’re made fully aware of Bond’s limitations regarding his arsenal in a cheeky classic exchange with Q.

The mission into Box Tunnel allows artist Jason Masters a chance to do what he does best, with Bond’s actions flowing smoothly like progressive frames in a film as he moves onward. The ensuing firefight is a joy to behold, in particular Bond’s turn-drop-and-fire motion in a single panel. Masters has proven before that his understanding of fluid body motions in fight scenes is impressive, and here the same level of detail is in play regarding gunfights. It’s an area which more creators should pay attention to, and this stands as a great lesson.

Dynamite’s run of great titles continues and James Bond is still one of the most impressive in its line-up. If you’re looking for a little action, you’re definitely in the right place.