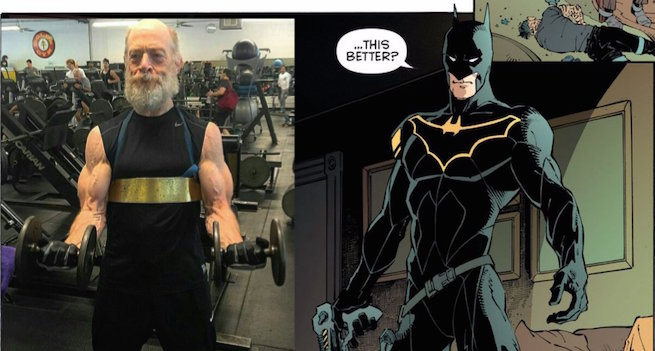 A few Instagram pics of J.K. Simmons in the gym are going viral online. The images show the actor preparing for his role as Commissioner Gordon in the upcoming Justice League films.

The 61-year-old Justice League star J.K. Simmons is barely recognizable after his training under fitness-pro Aaron Williamson. He is incredibly muscular and now sports a full bushy beard. His buff physique is in line with Snyder’s vision of the DC Universe. All the other actors, including Henry Cavill, Ben Affleck, Jason Momoa, and even Ezra Miller are bulky strong characters.

Justice League Part One has a release date of November 17, 2017 — the 25th anniversary of DC Comic’s best-selling Death of Superman story. It will star Gal Gadot as Wonder Woman, Ben Affleck as Batman, Jason Momoa as Aquaman, Ray Fisher as Cyborg, Ezra Miller as The Flash, Henry Cavill as Superman, J.K. Simmons as Gotham City Police Commissioner James Gordon, and Willem Dafoe in an as-yet-undisclosed role.

Saturday morning, 61 years old & making the young generation jealous. This is what dedication looks like. #JKSimmons

The Woman In The Window: Netflix Scoops Up Amy Adams Thriller