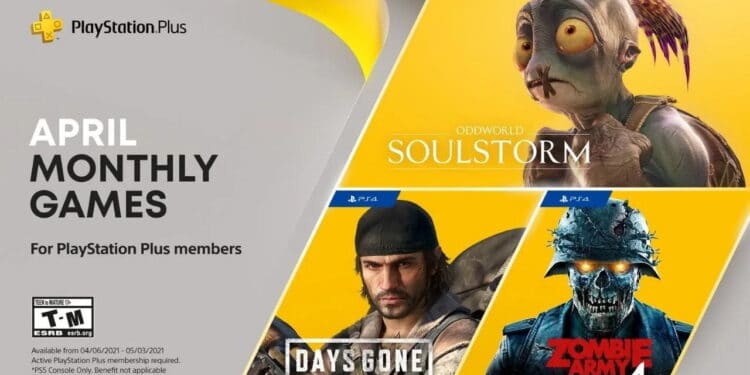 It’s a new month (April) and that means new free games for PS Plus subscribers. Starting April 6, Days Gone, Zombie Army 4, and Oddworld: Soulstorm will be available for download.

All three titles are really cool games and should be well received by the Playstation community.

Of course, this is in addition to the other 10 Play At Home titles being released by PlayStation for free.

Oddworld: Soulstorm, a re-imagining of 1998’s Oddworld: Abe’s Exoddus, is an upcoming 2.5D side-scrolling platform game that sees players control Abe, the game’s protagonist, an alien being who is determined to save his fellow Mudokons from slave labour.

This is probably the PS Plus title most people will be excited for this April.

The 2019 action-adventure survival horror video game, Days Gone, received mixed reviews when it first released. Over time, however, many have grown to love the third-person zombie-infested title, specifically because it places players in situations where they have to kill off large hordes of the undead.

If you’ve been meaning to try it but didn’t pick it up after reading the reviews, now is a good time to give it a go — especially considering the current economic climate. A post-apocalyptic tale is just what we need as a distraction from the pandemic.

The third PS Plus April title is another zombie title, Zombie Army 4: Dead War, a third-person shooter set in 1946. It’s your job to kill off Hitler’s hordes of the undead. It’s an alternate history tale set after the Second World War.

If killing countless numbers of zombies is your idea of fun during your downtime, this one is definitely for you.

All in all, these are really fun titles. All you need in order to download all three titles is a PlayStation Plus subscription. R119 per month, or R319 for 3 months, or R561 for 12 months, gets you the entire loot.

What are your thoughts on the PS Plus April games? What will you be playing?