Home > Movies > Is Dune the Next Lord of The Rings?

byStaff Writer
in Movies
Tags: DuneThe Lord of the Rings

It’s the question everyone is asking at the moment: Will Dune become the next Lord of the Rings?

When The Lord of the Rings was first released, it shook the world of pop culture. Beloved by both geeks and common folk alike, its cast became household names while its scenes were imitated and parodied across the internet.

The Lord of the Rings is a story of hope and triumph in the face of insurmountable odds. It is the tale of Frodo Baggins who embarks on a larger than life journey to rid the world of the chaos of the One Ring, crafted by the Emperor of Darkness himself, Sauron. Perhaps a large part of its appeal was the depth of this world. The movies were adapted from a series of books by author J.R.R Tolkien who had given the world of Middle-Earth incredible and intricate depth.

Much like its predecessor, Dune is also adapted from a series of books by author Frank Herbert. It is set in the distant future, where humanity has grown technologically intelligent enough to lay claim to planets other than the Earth.

Dune chronicles the journey of the Atreides family who are tasked by the Padishah Emperor Shaddam IV to accept stewardship of the desert planet Arrakis. Arrakis, though inhospitable and sparsely populated is the only planet that produces ‘melange’ or ‘spice’. In addition to being immensely beneficial for interstellar travel, the spice is a miracle drug that grants its users superior mental abilities and enhanced life expectancy, essentially elevating them to a higher human.

As the House Atreides realizes the complexity of the task at hand, they must also battle opposing Houses who the Emperor has very cleverly pit them against, in a bid to weaken their position and render them unable to challenge his authority.

The world of Dune enjoys the same depth Lord of The Rings‘ Middle-Earth does. Author Frank Herbert offers us quite an in-depth view of the world he has built. The state of humanity post mastering interstellar travel, the existing power structures, the religions and the people.

Reading through Dune, as authored by Frank, is an experience that authors in the coming years struggled to emulate. In addition to being quite detailed in its intricacies, the book explores multiple themes throughout its length making it difficult to put down.

So while it can be said that the Dune books are on par with The Lord of The Rings, can the same be said about the movies?

It is difficult to tell at this point. A lot of people are drawing comparisons already pitting Dune as the rightful predecessor of The Lord of the Rings. 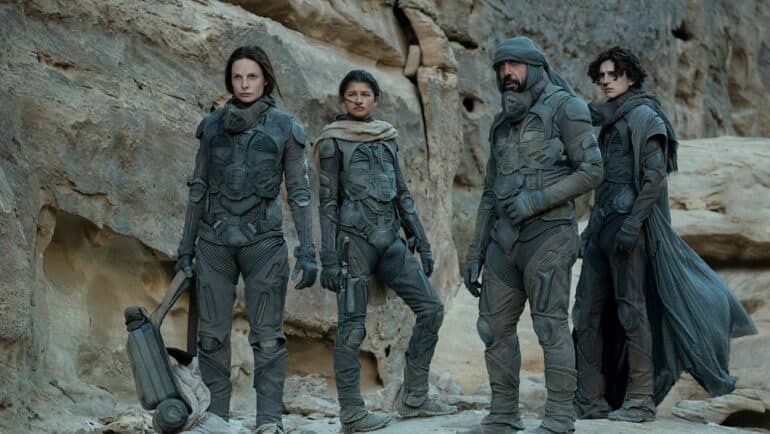 It is true that both The Lord of the Rings and Dune’s characters have this charm to them that make them instantly loveable, their struggles and stories relatable. While the first movie was arguably the best cinematic experience this year had to offer, and actors Timothee Chalamet, Rebecca Fergusson, Oscar Issac among others boast a powerhouse of a cast that deliver incredibly diverse and engrossing performances, the legacy of Dune is still largely dependent on the movies that follow.

The first movie exists as a prologue to the story of Paul Atreides and, while it does a good job at it, a large part of the main plot points are still to come in the movies that follow.

If director Denis Villeneuve does as good a job as he did with the first movie, it would not be a stretch to say that the Dune trilogy might give The Lord of the Rings a run for its money.