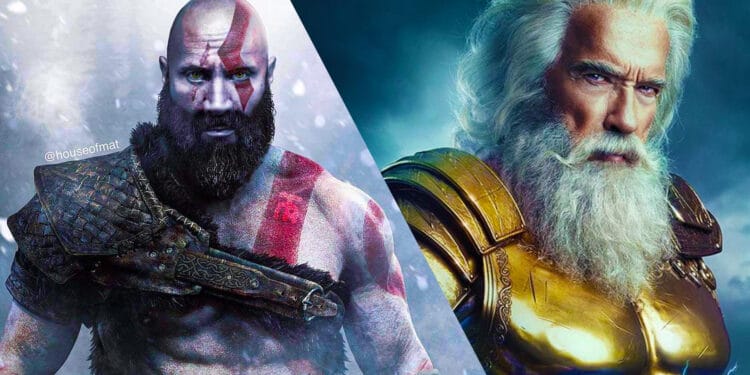 Okay, this is a big jump but bear with us for a second. In the same week that Dwayne “The Rock” Johnson mentions that he is working on a video game movie adaptation, Hollywood legend Arnold Schwarzenegger shares an image of himself as Zeus in a mysterious new project. Are they related or is it simply coincidence? And secondly, could they be teasing a God of War movie?

Last week Hollywood’s highest-paid actor announced that he landed a role in another major video game adaptation. Of course it didn’t take long for the internet to start putting out guesses. Some have suggested that it would be a live-action adaptation of Call of Duty, while others have guessed that it could be Quake. Others believe that it could be a GTA movie adaptation or even a God of War movie.

The Rock has yet to announce who is playing in which franchise — but could it actually be Kratos in a God of War feature film?

A post shared by I’m MAT, this is my house. (@houseofmat)

“I can’t tell you which game in particular we’re doing, but there will be an announcement this year,” said The Rock in an interview with Men’s Journal. “We’re going to bring one of the biggest, most badass games to the screen – one that I’ve played for years. I’m really excited to bring it to fans around the world. Of course, we’re going to do right by our gamer friends – but really we’re just going to make a great movie.”

For the longest time fans have been requesting a live-action adaptation of the popular PlayStation game. There have been countless rumours suggesting that a film is actually in the works. Some rumours even mentioned Hollywood names like Gerard Butler and Jason Momoa were in talks to play the Greek god. Unfortunately, none of those rumours proved to be true, or at least manifested into an actual film.

In other news, possibly related, 74-year-old Arnold Schwarzenegger is teasing a movie where he will play Zeus. Taking to social media, the Terminator actor shared an image of himself dressed in armour with lighting bolts around his hands. The post was very cryptic with only “Coming February 2022” written.

At the moment, nobody knows what this film is or when it was filmed. It could even just be a concept for a movie featuring the former bodybuilder.

But imagine this: what if The Rock is playing Kratos in a God of War movie and Arnold Schwarzenegger will be playing his father, Zeus. Imagine that.

Yes, we’re all playing guessing games right now but we had to put it out there. Anything is possible, right? Who would have thought we would someday get a Spider-Man film starring Tom Holland, Andrew Garfield and Tobey Maguire. But here we are.

Tell us, would you like to see The Rock and Arnold Schwarzenegger in a God of War movie?