Willem Samuel is a South African comic book artist, songwriter and painter currently based in the UK. A brief scroll through his work and you’ll be inspired by the way he captures the beauty of our country.

His work on Die Swart Kat and the acclaimed Mengelmoes, his first original graphic novel, has propelled him to success abroad and established him as one of the leading voices in South African comics. We sat down with Willem for an interesting chat about art, life and the local comic book scene. I see that you worked at Strika before. What are you currently doing in London? Are you working for someone there or freelancing?

Willem Samuel: Yes, I worked at Strika for six years. Came to London in 2013. I came here originally to complete my graphic novel Mengelmoes. Which I have done. In between that, I’ve been doing work for various clients, even a couple of television pitches. This year, on top of completing Mengelmoes, I’ve also had an exhibition and released an EP. Not sure what to call what I’m doing, but I’m busy!

So you do more than just illustration?

Willem Samuel: So… Illustration, lots of comics. Water colour and acrylic paintings. Also some concept art and storyboarding. For me that all falls under “drawing”.

And music, and the TV pitches?

Willem Samuel: I’ve always been making music – especially composing. This year in February I was able to release an EP of 6 songs called Langafstand. And then I worked with an international team of Investigative Journalists for TV pitches to Netflix, the BBC and Amazon. Totally different from my usual work – but it was fun doing them.

So you have your finger in many different creative pots?

Willem Samuel: Yes. Many pots. It’s a blessing and a curse. The tendency is to micro-focus on one small thing and do it very well. For me, I get bored easily and projects can easily become a chore. When that happens I usually find some other outlet while labouring to get the other one done. For instance, today I’m finishing off paintings, which is laborious. So, I’m doing some character sketches for a new comic idea in between – which keeps me going. There aren’t many people from South Africa who can boast the experience you have.

That’s awesome. I saw Mengelmoes at Readers Den. Is that your own story and art?

Willem Samuel: In London, I’m like… one of 8 million people in one city. You’re also weirdly much more aware of who is doing what and, for some reason, I never compared myself to artists internationally until I came here. So… the competition is fierce and one can’t be complacent in thinking that you’ve reached some sort of peak. I don’t think I will ever boast about the experience. For me, it’s been a discovery and making up for inexperience.

You reckon you wouldn’t have the same success if you were in South Africa?

Willem Samuel: Um…that’s a hard question… I mean firstly defining success. I don’t think my work would have improved as much as it did if it wasn’t for coming to London. Yet, my comic is about growing up in South Africa. So… I think this place just taught me how to use what I already had. And yes, I wrote and drew all of Mengelmoes.

Sorta like Neill Blomkamp did with District 9? Being in a foreign country helps with seeing the beauty of South Africa and South African culture?

Willem Samuel: Yes. You have to get right down to what makes you different. In SA I was like: Mengelmoes is a comic about me. That’s kind of boring and hard to sell. But overseas I realised: Mengelmoes is about life for a whitey in post-Apartheid South Africa. The whole thing became way more interesting. But I had to focus on what made me different from the masses in order to be recognised. I became more South African in a way. When I was working in Cape Town I tried to be all international and here I’m local. And I think it’s been working. 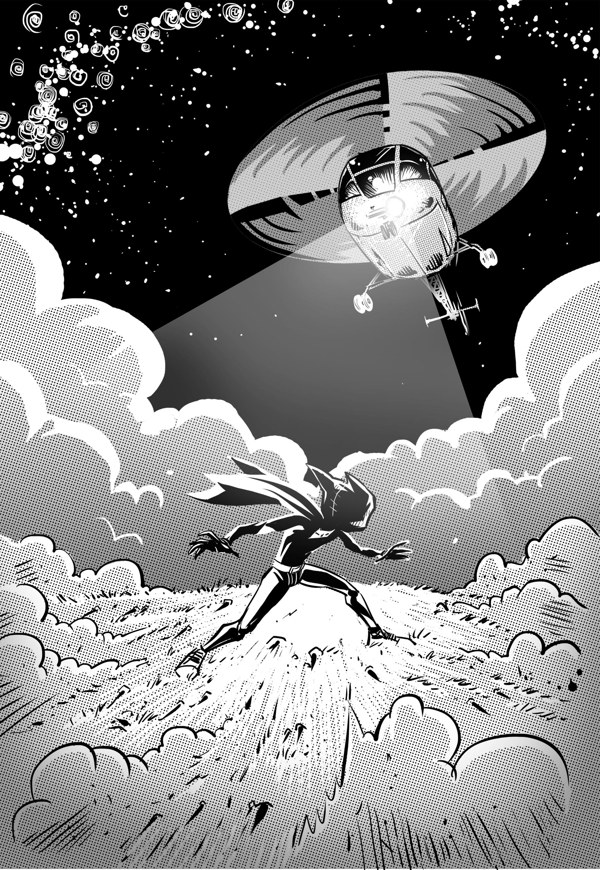 I saw that you worked on Die Swart Kat too. The illustrations are so good. How did that come about? And also I noticed you changed up the character’s look a bit – was that the company who hired you that gave you that freedom or something you thought of? It’s a slightly more modern look.

Willem Samuel: For Swart Kat? The modern look you mean?

Willem Samuel: Yeah, I loved that project and people have really been responding to it, which is nice. Interestingly enough, the costume was based on the descriptions in the books. The image we have of Swart Kat was from the TV series – and they changed the look from the books. So… my “updated” version is actually closer to the original. My good friend Annie Klopper rang me up when she was working at Protea and got me to do the illustrations. I don’t think a pitch has ever fit my style so perfectly. It’s kiddie stuff – but dark. But yeah – I had total freedom and I can hardly remember any edits. They were just like: ‘COOL’.

Those books and the TV show have a long history in South African culture. I mean, everyone I know remembers Swart Kat – even those who can’t speak Afrikaans. Do they or you have plans to do more? Comic books maybe?

Willem Samuel: Well, the whole problem is with rights and ownership. So, I guess I can do Swart Kat comics, but I need to buy the rights. I even have my own version of Liewe Heksie. 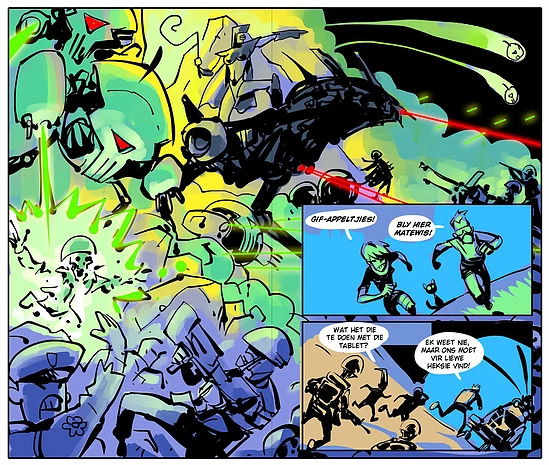 Willem Samuel: There’s a bit of a deluge of nostalgia these days and I think it’s important to tell new stories. But Liewe Heksie would be cool. Interster would just need some repainting. All those spaceships had the old SA colours on.

I think South Africans don’t realise how cool those characters are.

Willem Samuel: I’m working on my own superhero comic, for years now. And I don’t think the ideas of characters are worse – it’s just unfamiliar. And that’s a big challenge today – getting people into something new, rather than re-consuming the old and the tried and trusted.

Very true. I think especially in South Africa there is a sense of I won’t support anything local – so artists are forced to work on some of the Batman and Superman stuff. I see it every year at the Readers Den event. Artists are forced to draw Batman in order to show off their talents. People are less interested in their original work.

Willem Samuel: Ooh. This is complicated territory. I think one has to separate the two ideas. There’s local VS international and there is “NEW” VS “OLD”. SA is massively behind creatively – especially in comics and animation. It’s getting better, but, when I was in school now one told me: ‘hey – you can become a comic artist’ – that just did not exist.

Supa Strikas started only in 2001 – when I matriculated. So that’s how new most of this is. I think when cool local content emerges – and it’s good, people in SA will respond. They’re not stupid. But there is a tendency for artists to blame the public for not reacting to their art, rather than upping their game.

I’m listening to your music. Are you promoting this in London or locally? Sorry, I feel like I’m going back and forth with this local versus international thing. I’m just curious how well Afrikaans music would do there.

Music: All my comics are in English, and Afrikaans is really the language in which I express myself the best. So… I decided to at least sing in Afrikaans. I’m not promoting the music here… although my label in Scotland.

And I DID open for Jack Parow earlier this year… so, I have zero competition here (but also zero supporters). I’m kind of working on a version of Afrikaans music that sounds good even if you don’t know the words.

I can see that. It’s not your typical Afrikaans “treffers”.

Willem Samuel: Yeah, there’s no reason to feel limited by being in SA. The internet is breaking down the borders. I think one just tends to have a sense of entitlement when in your own country. It’s the same with the English in the UK. While when you’re an immigrant, you don’t expect anything from anyone and you have to learn to hustle.

I must say I’m a little saddened by the fact that you’re not here anymore tho. Do you have plans to return to South Africa at some point?

Willem Samuel: Yes. I’m sad too. But I came to London to explore an opportunity. It was more a “yes” to something than a “no” to South Africa. I’ll be back soon enough.

What’s your ultimate dream? Where does this all lead for Willem Samuel?

Willem Samuel: Um… I don’t know. I have a vague vision of my comics and music somehow being intertwined. But that can take various forms.

Is there a space where your art and your music will meet? Like Gorillaz?

Willem Samuel: Yeah – maybe. Or maybe more like an animation – sound and music. The problem is I am one guy – and finding time is hard. I’m discovering that I have to have all the wheels running at the same time – only then do I get fusion where the genres cross polinate.

It’s all about constraints. I tend to solve my problems creatively – rather than practically. So I’m like: “Would it not be cool IF” – rather than, “What do I have and how can I get it done by Friday”

Honestly your music is a lot better than 90% of the Afrikaans music I’ve heard.

Willem Samuel: Thanks – glad you like it. These songs were all recorded as a present to my wife – as a wedding present. Then a guy last year asked me for some songs and I sent him these because it’s all I had and yeah – so, that was kind of cool to have that released.

Really great chatting to you.

Willem Samuel: No, thank you. 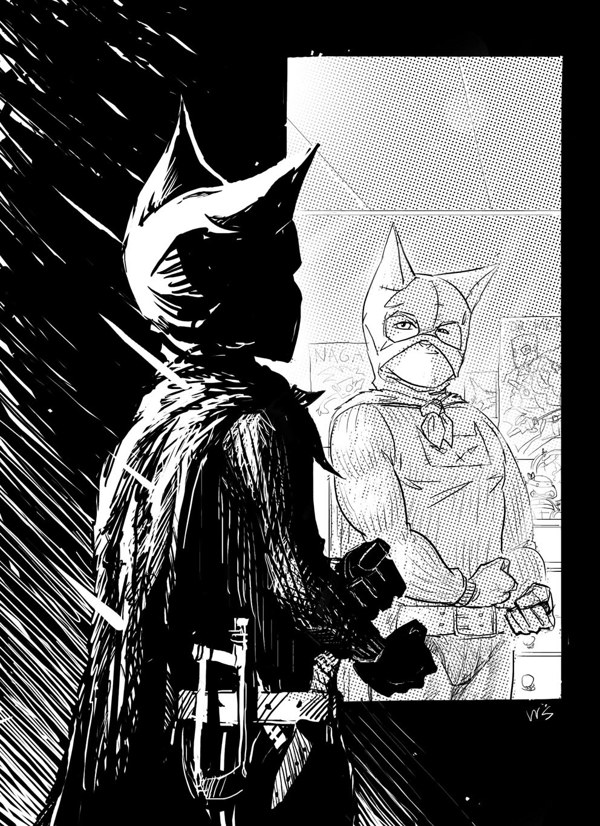