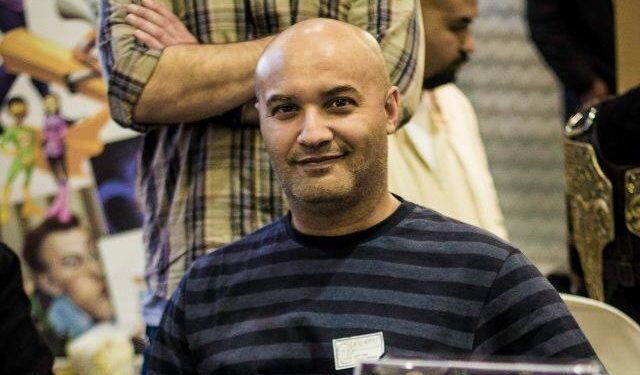 Meet Moray Rhoda, a South African comic book enthusiast who has been involved in the local scene for over a decade.

Currently self-publishing a South Africa/Australia collaboration graphic novel known as Velocity (www.gaining-velocity.com), Moray has a day job as an illustrator and designer. However, this year saw Moray achieving two of his own personal goals: hosting a panel talk at the San Diego Comic-Con and co-ordinating a successful Open Book Comics Fest (http://openbookfestival.co.za/comics/) in South Africa.

We took a little time to get to know Moray Rhoda better and find out more about his love for comic books. 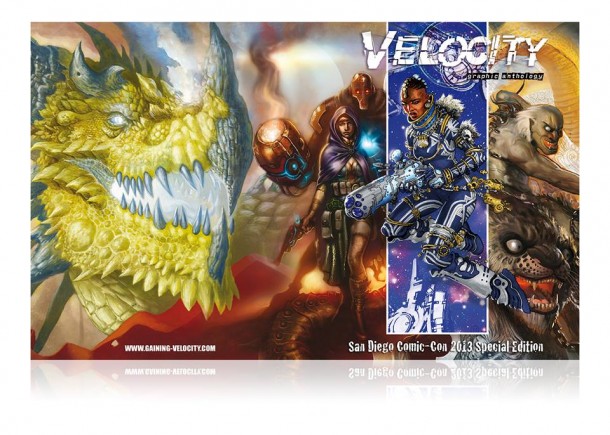 1. What drew you to the world of comics and illustrations as a kid?

Moray Rhoda: My dad – that would be the simple answer.

He loved comic books but his taste was mostly British comics like Eagle, Tiger, and Beano. Also the old school war comics. So, my first exposure to comics at primary school was mostly stories about sports, action, and adventure with the occasional sci-fi story thrown in. The library also stocked those old Classic Illustrated stories retold in comic format books, so that’s where I read Ivanhoe, Three Musketeers, and Moby Dick…

My dad would get me all kinds of comics – even ones based on TV series like Bonanza (really, really old school) and Star Wars.

My buddies at school got me into DC & Marvel comics. My favourite characters back then (and now to some extent) were Daredevil, Batman & Moon Knight. Much later (high school and college) things like 2000AD, Heavy Metal and DC’s Vertigo line became my fascination.

2. Over the years there must have been a few people that have influenced your illustrations in one way or another. Care to tell us who inspired you?

Moray Rhoda: There’s been plenty, so many…

I could go on.

3. With all the trials, tests and tribulations, what has been your biggest success?

Moray Rhoda: The panel talk at San Diego Comic-Con has to top the pile. It is the best-known comic convention in the world and a fanboy dream to be there – being on a panel that could inform and define what SA & Oz comics are all about was a great honour.

Of course, it was made even better by having two friends on the panel: Neville Howard, my Velocity partner in Australia and Ray Whitcher, one of the lead admins behind Legionink forums and a comic scholar in his own right. 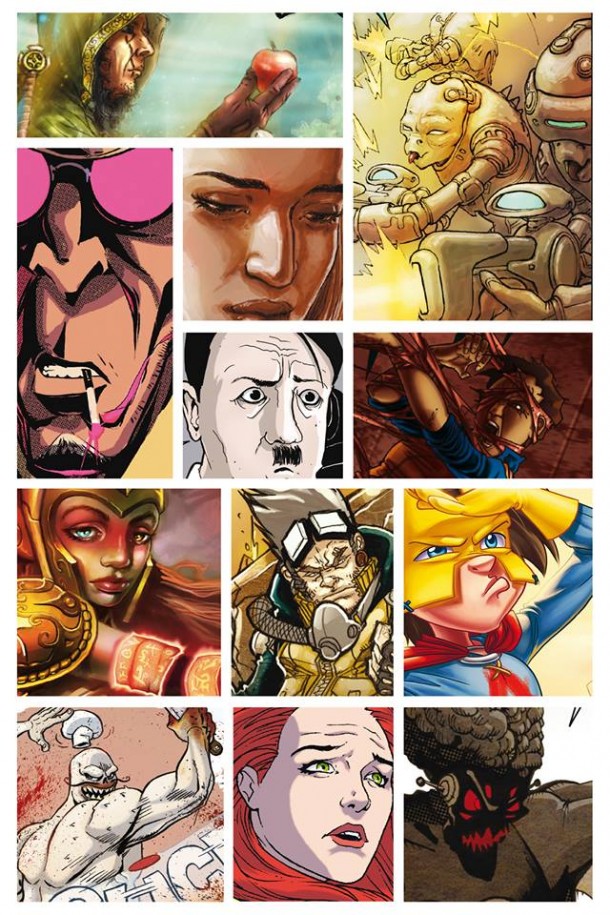 4. Velocity has some really great illustrations. What is Velocity all about?

Moray Rhoda: Fantasy & sci-fi stories at its core. The book is a collaboration between SA and Australian artists, although we have expanded a bit to include artists from Zimbabwe and New Zealand. The idea is to give the artists exposure and to help them be part of a book that can serve as a show of competence and as part of their portfolio.

5. Where did the idea to create Velocity come from?

Moray Rhoda: Neville Howard started pitching the idea to me after seeing the vibrant Australian comic scene. Like South Africa, it is also a small country with artists producing creator-owned work mostly, as opposed to having big publishers. The difference there is the level of support from the public and also the fact that they do have a few publishers like Gestalt publishing (www.gestaltcomics.com/‎)

6. If I look at some of the characters in Velocity you cannot help but feel that sense of Africa in the art. What makes Velocity different to any other graphic novel on the market?

Moray Rhoda: We’d like to think that we are getting closer to creating a unique identity, but I am sure more people feel that our artwork is not that distinctly African or Australian. However, I think to some extent we do encourage contributors to add their own unique vision, without being too prescriptive about the form stories and art should take. Whether we like it or not, we do not think exactly like the rest of the world so maybe that comes through with individual artists/writers. 7. Being invited to San Diego Comic-Con must have been one heck of an experience. How was Velocity received at the grandest stage of them all?

Moray Rhoda: With surprise mostly. I think we tend to forget how little the world knows about our countries. Just the fact that we’re doing comics at all was something that the general audience might not have known about, but it was something that they immediately identified with. The surprising part came mostly from the level of work and the type of stories that we are doing. Our presentation started with Velocity, but we also showed other SA & Oz comics as part of explaining what is happening in our countries and despite what people might believe, the growing and overwhelming trend is fantasy & sci-fi and general fiction these days.

8. What did you learn from experience at San Diego Comic-Con 2013?

Moray Rhoda: It was extremely inspiring to get a glimpse of the level of respect comic creators get from the public and their fellow professionals in the industry. There is an understanding that the form of storytelling is something that is a vital and important part of building pop culture. South Africa can do with something like the Eisner Awards – but maybe we should get more comics out first. What seems to be happening is a certain level of disenchantment with the big companies (DC & Marvel) coming from the comic creators.

A lot of buzz is happening around creator-owned work, self-publishing, and companies that publish creator-owned work (like Image, Dark Horse & Boom). A lot of the dissatisfaction seems to be coming from the fact that Hollywood has become a major influence in how comic companies do business.

What creators in the states are doing is that they’re focussing on getting their own workout and worrying about a prospective audience later.

All the American companies are entering the digital space – either having their books available as downloads or readable online. This doesn’t mean that they’re moving away from print, it is very much a combined approach to making their books accessible to the public. 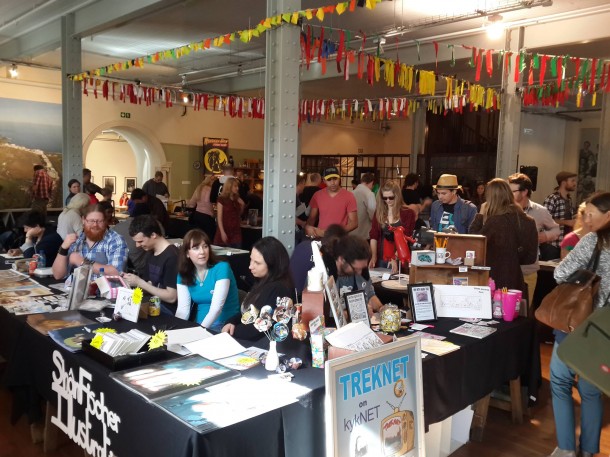 9. Earlier this month you coordinated the Open Book Comics Fest 2013. What made it different to any Comic expo/fest/gathering of the past?

Moray Rhoda: In SA terms, I am sure that it was the first time that a local comic expo/fest had the trifecta of an artist’s marketplace with several comic book launches and book signings, panel talks, and workshops.

Another thing that sets Open Book Comics Fest apart is that the artists came from all over SA, we had two international speakers and the entire event took up 4 days. I think it was probably the only place where you had a mix of big-name comic folks like Zapiro and Rico (Madam & Eve), mainstream writers like Ian Rankin and Lauren Beukes and the new and exciting young talent coming through in illustration, cartooning and comics.

10. I had a look at the photos posted online and the venue always seemed busy. Was the turn out as you expected it to be?
Moray Rhoda: The turnout was fantastic – in actual fact better than expected. It was consistently busy throughout the two days we had the marketplace and also the panel talks and workshops were very well attended.

11. What was on offer at the Open Book Comics Fest?

Moray Rhoda: Artists at tables interacting with the public, plenty of SA comics on show, an exhibition of work in progress, comic book launches and signings, lots of panel talks including public Q&As and workshops.

12. Will the Open Book Comics Fest be run annually now?

Moray Rhoda: It was actually the second time around – we rebranded it from it’s old name last year. So the short answer is yes: it is an annual event and we hope to make next year’s event bigger and better. It also gives SA comic creators a date to aim for in terms of launching their books. :) 13. Who is your favourite comic villain and why?

Moray Rhoda: Omni-Man (from the Image comic Invincible) because I did not see that coming. Also, he rocks a sweet ‘stache.

14. At San Diego Comic-Con, with the exception of your own stand, which other stand did you spend the most time at?
Moray Rhoda: Dark Horse – because I had to queue in line to meet Mike Mignola (creator/artist of Hellboy).

15. Where can our readers get a copy of Velocity?

Moray Rhoda: If your readers would like to see what Velocity is about they can read a 100 pages of complete stories at http://issuu.com/moray_rhoda11/docs/ultimatevelocity 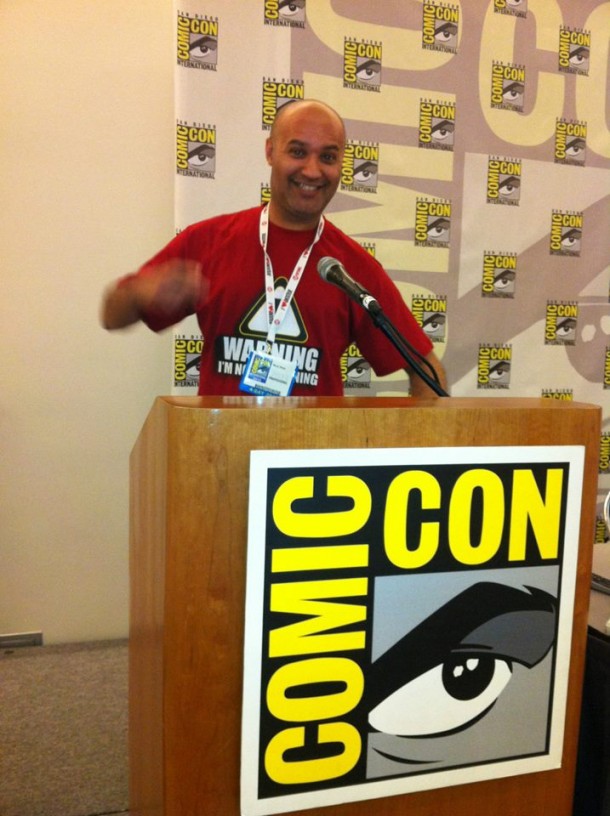