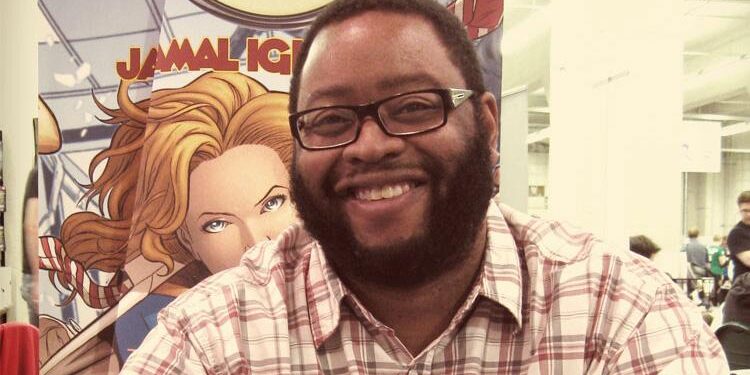 It is truly an honour and privilege to interview a man who DC describes as a “triple threat”, comic book legend Jamal Igle. He has worked with the biggest comic book names in the industry, Image, Marvel and DC, but it is his recent work with Action Lab and Molly Danger that caught my attention.

When did you discover that the wonderful world of comics was your true calling?

Jamal Igle: Well, I was always a comics fan, from the age of 5 or so, but I didn’t really make the leap to trying to become a comics creator until I went to high school. That was the point where it dawned on me that you could make a living creating comic books.

Have you experienced any challenges in your 20+ years of being in the comic book industry?

Jamal Igle: A few, I guess. A lot of my challenges were always based around other people’s perceptions of who I need to be or what my work needed to look like in order for me to have longevity as a creator. I eventually took the approach that catering to other people’s wishes wouldn’t get me anywhere and I needed to be me and do things my way.

I can see that your drawings all have a signature style. Who or what has influenced your art style?

Jamal Igle: I’ve had a lot of influences, the biggest being Dave Stevens, Brian Bolland and Steve Rude. My style has been pretty much the same, I’ve evolved though. For a while, I was trying to emulate guys like Brian Stelfreeze and Cully Hamner, but eventually, like I said before, I decided to be myself creatively.

Which past titles did you enjoy working on the most and why?

Jamal Igle: I find something enjoyable about every project I take on. For me, that’s the only way you can make projects work. However, I still always lean towards my runs on Supergirl and Firestorm: The Nuclear Man being on top of the list.

You have done a lot of work on Supergirl in the past. Have you read the Man of Steel prequel perchance? And would you like to see a Supergirl movie or Supergirl introduced to Zack Snyders sequels?

Jamal Igle: I did, because two of my favourite people (Sterling Gates and Jerry Ordway) worked on it. Could I see Supergirl in the Man of Steel universe? Probably. But I have no interest in Zack Snyder’s take on Superman.

What current projects are you working on?

Jamal Igle: I’m currently pencilling an issue of G.I. Joe: Special Missions and I have a project to be announced coming up right after.

What is Molly Danger all about? Where did the idea come from?

Jamal Igle: Molly Danger, in my universe, is the world’s first superhero. While she looks, acts and sounds like a 10-year-old girl, she’s actually over 30 years old and thought to be an alien immortal. The series is about her, her life a the protector of Coopersville, N.Y., and her search for a life outside of being a superhero. She’s a “princess in an ivory tower” in the idea that she doesn’t have a secret identity, friends, family outside of the organization she works for D.A.R.T. The idea really started about a decade ago when a friend of mine and I were tossing around ideas for an animated series.

Has your daughter Catherine influenced the creation and direction of Molly Danger in any way?

Jamal Igle: Not so much the creation of Molly, because Catie came long after, but she has certainly shaped my approach to writing Molly as a much more upbeat and realistic character.

After reading Molly Danger Volume 1 I could totally see it as an awesome Saturday morning cartoon. Would you consider an animated adventure anytime soon?

Jamal Igle: Absolutely, if it were the right deal. I don’t want to rush a cartoon out just to have something on the air.

What does the future hold for Molly Danger after it releases on 15th October 2013?

Jamal Igle: Prepping for book two and beyond. I’m still deciding to see what the funding method would be and I still have fulfilment to do via Kickstarter.

What has been your most rewarding experience in the industry?