Infinium Strike is a tower defense game where you take on the role of captain of a battleship as you look to save humanity from the alien species known as the Wrog. The game is set in the year 2160, after the world united in civilisations bid to explore the reaches of space. Their exploration comes to a halt when they’re attacked by the Wrog, losing colony after colony. After years of onslaught, a new battleship is built, the TSF Freedom Strike, a battlecarrier capable of self-repair, using a living titanium resource known as Infinium.

The game is developed by Codex Worlds and published by 1C Company for Windows PC on the 14th July 2016. With an over-abundance of tower defense games for all platforms, you wouldn’t be faulted for being pessimistic at the thought of yet another such title. But, you’d be wrong in thinking that it plays out like every other tower defense game out there. Instead, the developers have created a different take on the gameplay, and paired it with an impressive 3D environment that looks the part. Have Codex Worlds struck the perfect balance with this space adventure? 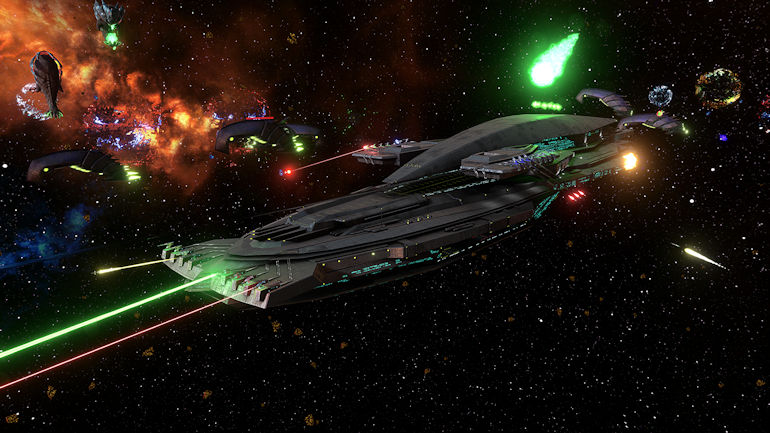 Upon first look, IS captures the player with some good visuals. Games set in space have a huge undertaking from the offset, as the beauty of space is something we’ve grown accustomed to since we were old enough to know what space is. Moreover, almost all kids at some point in their life would have wanted to be an astronaut, or at least visit space in some form. Thankfully, the developers struck a good cord here with the game’s design and visual. As you progress to each of the different levels, you’ll notice that the backgrounds change throughout, varying from good and pretty, to outright stunning. It’s easy to become invested in these visuals, wanting know what the game has in store next for your eyes. Unfortunately, the other elements of the graphics don’t quite live up to the same standard. The alien ships, weapons, and lasers, all feel out of place amongst the stars. Even more surprising is the lack of realistic detail on the main battleship, the TSF Freedom Strike. I would certainly hope that the developers will spend some time redesigning the look of the battleship with some finer touches, as it doesn’t do the game justice. At the heart of the gameplay you’re still playing a tower defense game. You’ll spend quite some time thinking about positioning and types of turrets to be places on the one of the ship’s four quadrants. There are four basic turrets to choose from at the start of the game, each of which provide its own unique attack method, which, in turn, only fires on a certain type of enemy. Thus, it’s important to have a range of turrets to ensure you’re not left short on attack when a new enemy enters the fray. While the backgrounds may vary between levels, the Wrog ships don’t change much as you progress, and, apart from an increase or a different combination of enemy ships, the game takes on a slight feeling of repetitiveness.

The sound quality of the game is impressive, as it delivers quite a good score. The sound effects aren’t as impressive, but get the job done without too much fuss. The narration, however, needs some work, as the voice actors seem a bit stale in their delivery. The actual story being told, however, is well done, and enough information is provided throughout the tutorial levels. The story isn’t all that deep, though, as you’re basically battling an alien race looking to wipe out our species. After the initial stages, the story doesn’t develop much. Thankfully, there are other challenges to play through away from the main story mode that provide good entertainment on its own.

When I first launched Infinium Strike, I had a heavy feeling in the back of my mind that it would take on the typical spaceship adventures that often seem to over complicated for my liking, and involve too many moving parts. Those fears did not come to pass, and the game, while detailed at times, does present itself as a good balance between too much and too little. At its core, Infinium Strike is still a tower defense game, but has some elements of strategy and different mechanics to set it apart from the norm. IS is a good game, but there’s still a lot of development work to be done to make it great. At times, the game is extremely frantic as you attempt to manage all four quadrants in which the enemies spawn, monitoring your turrets and shields. Unless you really enjoy such games, it does feel like a chore at times. And with this, I would advise only those who enjoy space strategy games, as well as those who enjoy tower defense titles, to purchase Infinium Strike.