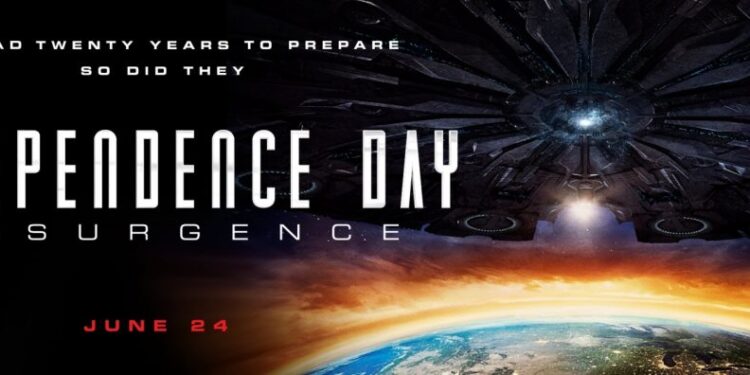 In retrospect, 1996’s sci-fi epic Independence Day was revolutionary. It ushered in a new age of disaster blockbusters, set the template for VFX, and elevated TV star Will Smith (The Fresh Prince) to a superstar. Now, twenty years later, like the aliens of the hackneyed sequel, Roland Emmerich and his all-star cast are returning for another invasion on cinema, upping the ante, this time without the help of its leading star. Unfortunately, while the CGI in Independence Day: Resurgence has certainly evolved with the times, the story and characters remain stuck in the ’90s. [dropcap]C[/dropcap]inema audiences are getting smarter. The silly tropes, narrative fumbles, and stereotypes that plagued ’90s cinema no longer have a place in the industry. Instead, viewers are looking for plausible but fun blockbusters (the proof is in all the Marvel films).

Thinking back to the original, Independence Day could easily be described as the unintentional grandfather of explosive films like Pacific Rim, Godzilla, or Transformers. Filled with throwaway wooden dialogue, clichéd characters, massive explosions, and convenient plot twists, Independence Day: Resurgence carries these sins into the present. It makes for great ’90s nostalgia, but it also wanders too close to the murky waters of bad viewing. Is it intentional? Perhaps. However, it doesn’t feel as fun as it should. The story takes place twenty years after the aliens first attacked. The world has advanced quite a bit since then, upping the security and using the tech left behind by the attackers to prepare for their eventual return. Lead by scientist David Levison (Jeff Goldblum), who previously destroyed the mothership with a computer virus, Earth Space Defense is keeping a lookout for any possible threats. When he discovers an active alien ship in Africa, he realizes that something isn’t quite right.

At the same time, former President Whitmore (Bill Pullman) is completely losing his marbles and his daughter is doing everything she can to help him stay calm. Her boyfriend, Jake (Liam Hemsworth) and her childhood friend Dylan (Jessie Usher), the son of war hero Steven Hiller (Will Smith), are skilled pilots who don’t get along. Of course, when the aliens do conveniently return on July 4th (again!) the youngsters are all at the forefront of the war and are forced to work together.

As the story progresses, the plot gradually becomes less and less plausible. Everything that happened in the original happens again – this time on a much larger scale. Expect to see entire cities being destroyed, weapons of mass destruction, a larger alien army, a bigger mothership, and even a giant queen alien. Of course, the only country capable of saving us is America, and the rest of the world sits back and lets them take the lead.

Consequently, Independence Day: Resurgence is bursting at the seams with characters. Emmerich has even resurrected Brent Spiner’s eccentric Dr. Okun to offer up the usual scientific gobbly-goop. Goldblum, the calm in the storm, steps out from Will Smith’s shadow and leads this time around. Out of everyone present, he is the most welcomed return and offers up some of the best moments. At times, he even seems completely aware that his character is a complete goof.

Despite being completely dull, the newcomers are given most of the shine, however. Hemsworth plays the usual trouble maker who goes against the grain and becomes the natural hero. Jessie Usher, who plays Hiller, never lives up to the charm of Will Smith and is completely forgettable. And Maika Monroe feels totally misplaced in a film too big to appreciate her acting talents. Emmerich doesn’t rewrite the rulebook with Independence Day: Resurgence. He knows what audiences expect from him, and delivers the expected, predictable beats. You’ll spend an equal amount of time laughing at moments that are genuinely funny as well as those that are unintentionally funny. It tries terribly hard to be an homage to the ’90s disaster blockbuster but comes across as a giddy series of unfortunate events. Don’t expect Resurgence to be half as groundbreaking as the original.

In the end, the film is little more than a fireworks display. Sure, it’s popcorn fun, but we expected a lot more. 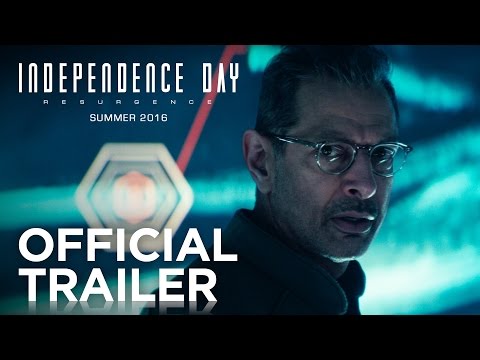