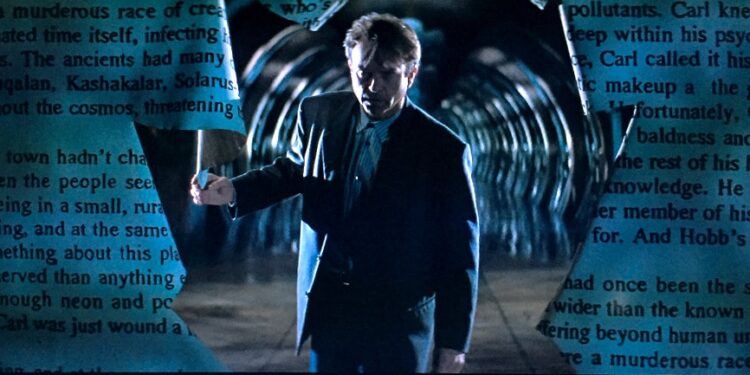 Any horror film that starts in an insane asylum, with our hero of the piece being in a padded cell, can’t be bad. In In the Mouth of Madness, Peter Trent (Sam Neill), apparently insane and rambling about the end of the world, begins to tell his psychiatrist his story and it’s a chilling one. Trent was an insurance investigator hired by a publishing company to locate missing horror writer Sutter Cane (Jurgen Prochnow), whose books are known for the disturbing influence they have over some of the weaker-minded readers.

He’s sceptical and views the whole thing as a convoluted publicity stunt. He tries reading some of Cane’s work and begins to experience some of the side-effects, but realises that the paperback covers also reveal a map to the location of Sutter’s fictional town Hobb’s End. Heading there to expose the whole thing as a scam, with Cane’s editor Linda along for the ride, he enters a world that looks normal from a distance… but we’re already realising it isn’t, and Cthulhu-style evil is firmly in control.

Trent is typically suspicious of everything, assuming that the town and its disturbed inhabitants are all some sort of weird tourist attraction the publishers have dreamed up; but his reality starts to fray at the edges. When Linda confronts Cane at the mysterious Black Church, she is instantly driven insane and possessed by the power of his latest book, In The Mouth Of Madness. Trent witnesses a man commit suicide in front of him and is attacked by a mob of mutated townsfolk. Finally, when he encounters Cane himself, Trent is informed that he is merely a character in the author’s book… and that he has no choice but to deliver this new book to the publishers and bring about the end of humanity. Despite desperately trying to fight it, it becomes obvious that he has no will of his own and the reality-warping power of Cane’s book is impossible to resist. The ending of the film is a true mindbender that you can’t even begin to imagine if you’ve never seen it before. It’s warped and truly disturbing and satisfies the darkest of our impulses as horror fans by not offering a happy ending. It’s something rare, where we don’t just get a twist that the evil still exists but rather shows flat-out that the heroes have lost. Even our hero doesn’t look particularly heroic in any way. You’ve got to see it to believe it.

If you’re looking for a film that takes the best of HP Lovecraft and Stephen King and merges them into a genuinely creepy film, In the Mouth of Madness is the one. While it may have been a box office and critical disappointment, it’s a cult film that achieves a level of true psychological horror unlike most. The blurring of reality is incredible, and it’s the sort of film that genuinely inspires nightmares and could drive you as insane as the Sutter Cane fans within it.

The acting is first-rate, with Sam Neill’s performance being truly mesmerising. The script has just enough references to make you question if Sutter Cane really is like Stephen King, and just what does go on up there in Maine all the time. John Carpenter, sadly, has never achieved the level of success he’s deserved as a director, and In the Mouth of Madness is, unfortunately, one of those films that many haven’t even heard of. Yet it’s one of those films that once you’ve seen it, you’ll never forget. Ever.