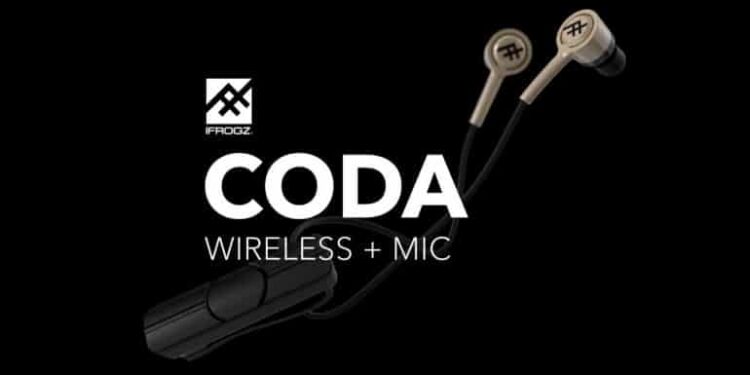 As far as looks go, the Coda wireless earbuds won’t be winning any awards. Don’t get me wrong, the design isn’t horrible by any means, it was designed more to be hidden from view than to be on show while the user wears them. The unit is divided into two separate portions, the earbuds and the power unit. The earbuds also have a very basic design, fitting in with the standard look and feel. That said, they are pretty comfortable in how they fit my ears, once again providing reasonable levels of comfort for long periods at a time. Again, I was taken by surprise as to the snug fit of the buds, which also doubles as a bit of noise cancellation as a result of the fit, without causing any discomfort after a few minutes of wearing. The power unit also has a simple design. The top side features a circular, flat power button in the centre, with the volume buttons on either side. It took me a few days to notice that the two buttons were slightly different as the one protrudes outwards to indicate a positive (increase volume) while the opposite button has an indentation to lower the volume. The volumes buttons tend to be a little sticky when depressed closer to the centre, but don’t show any indication of this in the middle and opposite ends of either button. The bottom of the power unit features a magnetised clamp, which is extremely flexible. The clamp fits easily onto the top of any shirt or t-shirt, allowing the unit to hang easily when not in use without the worry of having to leave them lying around. The front side of the unit has both the microUSB charging port, along with the notification LED, which displays power, sync and Bluetooth indications.

The only real issue I had with the design of the earphones comes in the form of the cabling. There’s no real manner in which to store the device when not in use, with suggestions that the cables be wrapped around the power unit, fitted into the clamp and stored away snuggly. This may be good in theory, but makes for awkward use when unwrapped for use, with the cables now twisted, and doesn’t remain untangled when attempting to straighten them. For this reason, I found it easier just storing them as is, without rolling them into a coil. As with the headphones, the earphones provide good quality sound, with great battery life. There’s a good mix of highs, mids and lows in audio playback, although the bass levels aren’t as good as the headphones. But that’s to be expected with 10mm drivers compared to the 40mm fitted to the headphones. There is a small issue when volume was turned up, as the clarity tends to distort a fraction, making it somewhat annoying to listen to. Thankfully, the snug fig meant that I never required to turn up the volumes, to where they started to distort, in order to block out peripheral noises.

The buttons work similar to the headphones, with the power button doubling as a power, play/pause and sync button, while the volume rocker doubles as volume keys and a long press to skip between tracks. The unit also carries an IPX-2 rating, which provides up to 10 minutes of water submersion, which makes it an ideal accessory for any workout. What’s great about the Coda Earbuds is that they also carry the Earbud Tips for Life™ warranty, which means that if your earbud tips were to be torn or damaged in any way, the company will replace them.

Battery life on the unit has a factory indication of 5 hours, which is reproduced in the real world as well. If you’re quite the audiophile, you’ll be charging the unit twice a day on average. In addition to this, Bluetooth is a standard 10m, and not the 80-something metres as observed on the headphones. If you’re looking for a good wireless audio device, I would recommend the headphones instead of the earphones on this one. Unless you’re in need of ultra-portability, you’ll get a lot more value for money, with a lot cleaner look and feel on the headphones, and better all-round sound quality. That said, if you prefer earbuds as opposed to over-the-ear cups, the iFrogz Coda Wireless Earbuds are affordable at R699. If you’re able to get passed the sticky cabling and don’t mind leaving them unwrapped when stored, they may just be the perfect pair for you.