With price of the leading flagship smartphones averaging around the R20,000 mark in the last year or two, there has been a large draw towards looking at mid-range smartphones, even among technophiles.

For most smartphone users, there isn’t really a necessity for the latest and greatest, other than bragging rights, with many of the added features superfluous to the majority of average users. With technology changing as rapidly as it has in recent years, buying a state-of-the-art smartphone today will already be outdated within six months, especially considering the top three smartphone OEMs run on separate release dates throughout the year, with both Huawei and Samsung actually having two major release dates.

And as the technology improves during this time, the mid-tier smartphones benefit from the reduced pricing of their hardware, allowing them to keep pricing down, while still offering what many customers believe to be great specifications.

A few weeks back, Huawei launched their latest ‘flagship’ mid-range smartphone in the form of the Huawei Y9 Prime (2019). Not only is it the company’s first smartphone to feature its pop-up front-facing camera, but with a host of features and powerful hardware, it definitely has a quite an enticing offer. So let’s unpack it. When it comes to the Y9’s aesthetics, there’s very little in the way of distinction between itself and most other mid-range units. In fact, if you look at both the Honor 10 Lite and the Hisense Infinity H30 devices, you’ll get a sense of what to expect from the Y9.

The unit has a standard rectangular frame with rounded corners and sides. There, however, a few slight changes. Compared to the H30, the Y9 doesn’t include the shortcut button on the left-hand side. In fact, there aren’t any ports, casings or buttons on the left side at all. As with both the H30 and 10 Lite, the Y9 features the power button and volume rocker combo within reach of your thumb on the right-hand side.

The bottom has the same identical layout as well, with the 3.5mm jack on the left, USB Type-C in the centre and speaker grille on the right. The top is also similar, with the main difference here being that the housing is noticeably indented and doesn’t lie flush against the frame.

The rear of the unit also has the same layout, which includes the camera lenses and flash on the top left, with the rounded fingerprint sensor in the centre towards the top in reach of your index finger.

The main addition to the Y9 is the inclusion of the pop-up selfie camera, situated on the top of the device on the left-hand side. The benefit of having moved the camera here is that it frees up some real estate on the screen, which I’ll touch on later.

For those worrying about the quality and longevity of the pop-up feature, you can rest assured that you won’t find yourself in a state of panic in relation to it breaking, as Huawei has added a number of built-in features to prevent it from falling apart too easily. For starters, Huawei guarantees up to 100,000 uses of the pop-up camera, with the team having conducted numerous tests before reaching this benchmark.

At an average of 30 selfies per day, you’ll be able to reach an impressive nine years without any issue. The second feature is the strength of the build quality. At the launch event, we tested the camera by hanging a set of 10KG weights off the ‘popped out’ camera, without any sign of failure, creaking and the likes. Huawei says that the camera will support up to 15KG if required.

The third feature added is based on software, with Huawei having added AI into its programming to detect when the Y9 might be falling. If a fall is detected, the camera will reset, moving back into its casing to prevent it from taking direct impact. If you add pressure to the top of the camera as well, then it will also tuck away into the casing.

In terms of actual specs, the Y9 measures 163.5×77.3×8.8mm and weighs 196.8g. The unit is ever so slightly thicker than some of the recent mid-range units reviewed, as well as being significantly heavier by around 30-40g. Considering the extra lens on the rear-facing camera as well as the pop-up feature on the front-facing camera, it makes sense that some bulk would’ve been added. Overall, though, it’s a fairly solid build with great promise, built upon a rather average design. 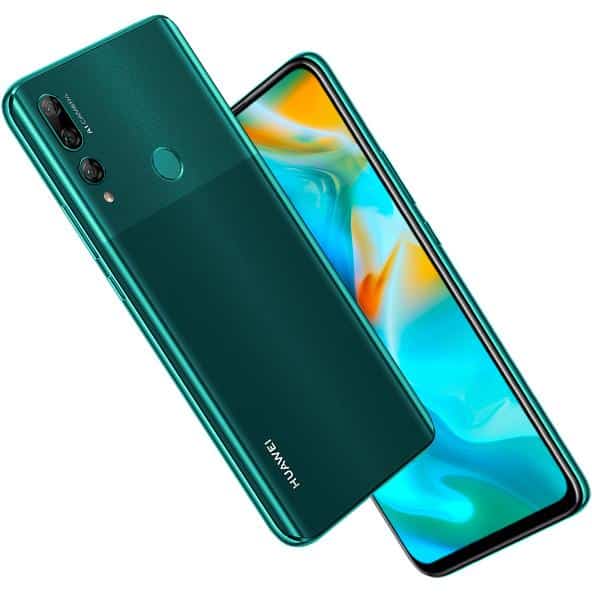 The Y9 Prime features a fairly large, phablet-sized, 6.59” screen, with a FHD+ LCD Full View panel. The screen has a decent 84.3% screen-to-body ratio, with the display having a 1080x2340px resolution, equating to 391ppi pixel density. Huawei has focused on providing an uninterrupted, edge-to-edge screen with very thin bezels on the top, left and right-hand sides. The bottom bezel is a bit larger, most likely due to some internals in the way, but it’s still quite decent to look at.

Having removed the front-facing camera from the front (no notch, cut-out, dew drop or the likes), there’s a lot more real estate to look at, with unobstructed view when watching movies or series, and playing games. The colour reproduction is good enough with the screen looking bright and crisp when viewed indoors. It’s bad either when viewing the screen in bright daylight, but it could be a little better. The contrast ratio is lacking just a tad, but we shouldn’t expect AMOLED deep blacks here. The device is powered by the Hisilicon Kirin 710F chipsest, which has an Octa-core CPU (x4 2.2GHz Cortex-A73 and x4 1.7GHz Cortex-A53) and Mali-G51 MP4 GPU. There are two storage options, including a 64GB and 128GB varieties, with both options having 4GB RAM. These underlying specifications power the Android 9.0 Pie OS, which has Huawei’s own EMIU 9.1 user interface.

As is the case with most modern chipsets, there’s little to no issues with running some of the most power-consuming app and resource-intensive games. The same applies here for the Y9 Prime. Multitasking was a breeze, having opened numerous applications side by side, as well as opening more than 10 tabs on the Chrome browser and was still able to run as normal.

The Y9 Prime has a non-removable, Li-Po 4000mAh battery, which is more than sufficient to power the smartphone for an entire day of usage. On an average day, I was able to push the battery into a second day before requiring to recharge early morning. On days where my usage was much lighter, I was able to eke out a full two days’ worth of use from the battery before it ran out of juice. What is lacking from the battery features is that it doesn’t include fast-charging.

While the Y9 Prime may not do enough to stand out from the crowd when it comes to its specifications, there’s no doubting that the team are reliant its front-facing camera as the marketing drawcard. As mentioned previously, the pop-up selfie-camera not only frees up a portion of the screen real estate, but also allows for a slightly more powerful camera.

This camera features a 16MP lens with f/2.0 aperture. The camera itself includes a host of features, including built-in AI, which offers real-time optimisation of up to eight scenes, retouching the quality and effects on the fly. There are also a number of effects to choose from, including bokeh, special lighting and numerous others. Having taken a number of selfies to test out these effects, as much as it pained me to do so, I had a mixed experience. The standard photos were good enough, along with the beautifying effects and the likes. Things became a little wonky, especially when these features intensity was turned up. While it was able to focus well-enough on my face, the areas around my face, including my hair and ears were either cut out, blurred or just washed into the background. That said, the photo quality was good, creating clear and colourful images, without too many effects added.

For the rear-facing camera, Huawei included a triple-lens setup, which includes a 16MP, f/1.8 lens, 8MP ultra-wide lens and a 2MP, f/2.4 lens with depth sensor. The built-in AI algorithm can choose between 22 different categories and over 500 scenes, all in real-time. Of the 22 categories, the camera distinguishes between food, sunrise/sunset, flowers, waterfalls, bikes, cats, dogs, fireworks and many others. The inclusions from the list that do stand out are the ancient building and panda categories, although the latter may be most useful in the Chinese market, with limited pandas in other areas around the globe. The camera performed these distinctions quite well, create beautiful images, both colourful and crisp. I would have preferred a bit more from the low-lit images with the AI accounting this scenario, but that said, it’s still very usable.

The mid-range smartphone market has become fairly saturated of late, with more manufacturers needing a standout feature or two to set themselves apart from the competition. With the internals mostly all equal across the wide range of mid-range devices on the market, OEMs rely on features such as cameras and software features.

With the Y9 Prime (2019), Huawei has created most of its buzz around the pop-up selfie camera, as well as the built-in AI features on the rear-facing camera. While I wasn’t able to get the most out of the front-facing camera, besides its usefulness in creating an uninterrupted view of the screen. Across the remaining set of features and specifications, the Y9 Prime performed really well. The unit ticks all the boxes when it comes to mid-range smartphone, and is definitely worth a look.

The Huawei Y9 Prime (2019) is a phablet-sized mid-range smartphone, which allows users to view its entire screen thanks to the introduction of the pop-up selfie camera.