Huawei Watch GT Review – A Device For The Occasion

Almost two years ago, Huawei launched its Watch 2, one of the best-looking smartwatches at the time. When it was finally released after months of rumours, the hype was sufficient to make propel good sales across the globe. Fast-forward to a few weeks ago and Huawei are at it again, having released the Watch GT (in various models), again after a long waiting period. With Huawei’s official entry into the South African market in late 2018, it signalled a new approach to market in the country, with devices released on par with the rest of the world. With their recent partnership with Discovery for Vitality benefits, announced alongside the SA launch of the P30 and P30 Pro, the uptake of the Huawei range of wearables will definitely be on the increase.

As with the Watch 2 before it, the Watch GT is a beautifully crafted smartwatch, making it the envy of all. That said, a lot has changed in the years in the build-up to its release, with Huawei having scrapped the Google Wear OS and switching to its own proprietary OS. But what do these changes bring to the ecosystem and is it something Android users can buy into? A few days back, the company announced that it had crossed the 2 million mark in terms of sales for the Watch GT, surpassing all expectations. The appetite for a different smartwatch, away from Samsung and Apple dominance, is on the rise.

From the outset, you’ll notice the significant size of the Watch GT. Much like the Watch 2, it is fairly large, with a 46mm case on the Watch GT Active, which I received for review. The unit is manufactured from stainless steel, with a ceramic bezel, all of which has a carbon coating for added protection. This makes the watch fairly rugged with its scratch-resistant finish, with Huawei claiming that it can withstand even the most extreme environments. Not one to purposefully attempt to scratch a review unit, there were one or two occasions I had bumped into an object or two, looking down at the watch and not noticing a single scratch. Being a review unit itself, I would have expected a fair bit more in the way of scratches but there aren’t any at all. This is pretty impressive for a device that’s almost two months old being passed around from person to person. 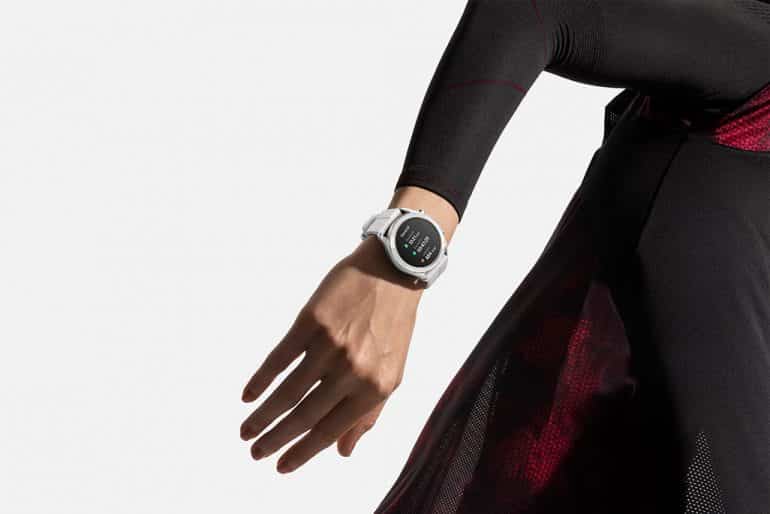 In addition to its ruggedness, the Watch GT is also waterproof, with a 5 ATM rating, which means you can keep the watch on during a shower or hit the pool and track your lengths. At its maximum capability, users can swim to depths of 50m for 10 minutes, or 10m for about an hour. That’s quite a good range being able to withstand the pressures of depths at up to 50m.

Having received the Titanium Grey Stainless Steel with an Orange Fluoroelastomer strap, it looks great in isolation. It may, however, not pair well with all your outfits, especially in a more formal setting. For that, you will need to have a change of strap, in which case it will definitely look the part in any situation.

In terms of the specifications, the 46mm unit weighs about 46g with dimensions of 46.5×46.5×10.6mm. There are two buttons on the right-hand side of the unit, which activates to separate menus, which I’ll discuss in more detail below. 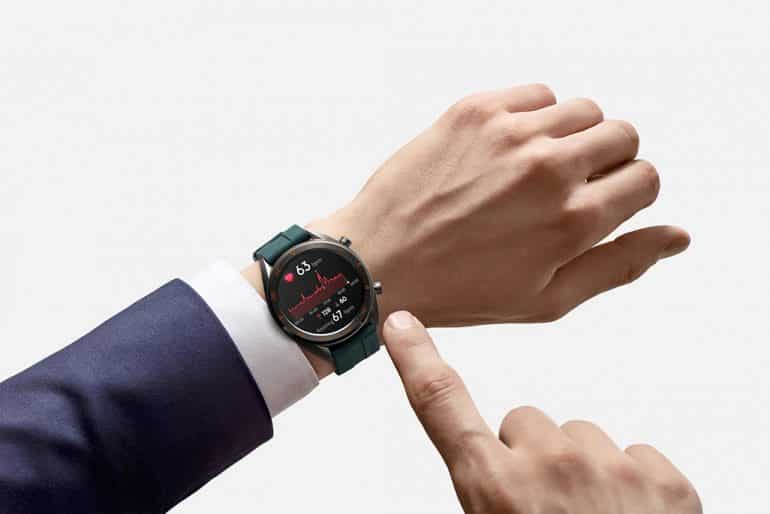 Another of the impressive features on the Watch GT Active is the 1.39″ AMOLED touchscreen panel, which has a 454x454px resolution display. The touchscreen panel supports both touch and swiping gestures, which allows for better navigation directly on the watch. Unlike many other wearables with touchscreen support, the Watch GT picks up gestures quite easily. The best part is that users won’t have to do the standard double touch to make sure it selects what you want.

Huawei has really stepped things up a bit in this department, with the AMOLED screen looking the part of a premium smartwatch. The colours are bold and bright, with the text crisp with zero pixilation to speak of. The brightness from the AMOLED screen, which adjusts depending on the light, makes it easy to clearly view the screen in direct sunlight, which is an issue with many other wearables with lesser screen specifications.

One of the biggest changes that Huawei made to the Watch GT is the switch from Google Wear OS to its own, propriety Huawei Lite OS. The claim here is that Huawei will be able to offer a fresh design and look over the Wear OS as well as both iOS and Android-friendly support. Huawei has stripped back a lot of the onboard support such as music playback and storage, to make way for a sleek experience dedicated to your fitness. This is also evident in the way you navigate the menus, swiping left to view your fitness goals for the day or swiping right to view your heart rate throughout the day. Swiping one more time either way will show the weather report for the day, with the high and low temperatures.

When it comes to features, the Watch GT has you covered across most of the fitness and sleep tracking support. In that respect, the unit includes the following sensors: accelerometer, gyroscope, magnetometer, optical heart rate monitor, ambient light sensor, barometer and GPS. In addition to this, the unit is also capable of measuring your VO2 Max (the maximum oxygen uptake) during your exercises. For each of the exercises tracked during the two-week review period, my VO2 Max score was rated excellent, which means that I was receiving sufficient oxygen intake during my runs and other workouts. The measurement also contributes towards the recovery time after your workout, suggesting when you should engage again in heavy exercise again. 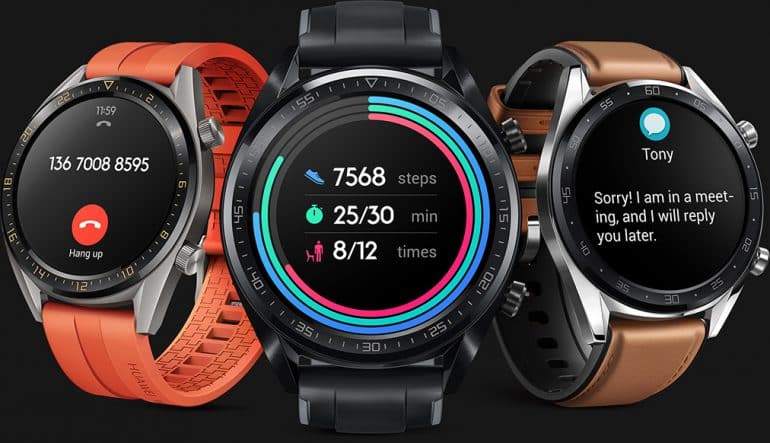 Coming back to the two buttons, as mentioned previously, the top button is used to enter the menu to reveal the list of built-in apps available for your use. These apps include the workout menu, heart rate stats, sleep stats, barometer, compass, weather, stopwatch, timer, alarm, flashlight and settings. The bottom button is a shortcut to the workout menu, allowing you to choose between 11 different sport options, as well as a 12th listed as ‘Other’ if it doesn’t quite fall within the previous options. Each of the options also have a settings menu, which allow you to set goals for yourself if you choose. These sporting options include running, climbing, trail, cycling and swimming.

The Watch GT is limited in its connectivity options, offering Bluetooth 4.2 BLE to connect to your smartphone. There is a lack of both Wi-Fi and NFC options, which means that you won’t have access to mobile payments, which has become the standard for many smartwatches. Another limitation, which stems from switching to the Lite OS, is the lack of 3rd-party apps and watch faces, which is where the likes of Wear OS and even Samsung’s Tizen does well thanks to its community of developers.

The Watch GT is geared toward full 24-hour tracking, from your steps and heart rate, to your sleep and exercises. And for the most part, it does the job really well. There is a clear distinction between the accuracy of indoor and outdoor activities, mainly as a result of the built-in GPS. For outdoor runs, the unit was able to track distances within about 100m across 5km when I measured it out via GPS maps, car speedometer, as well as additional fitness trackers. Switching to an indoor activity, such as a treadmill, I found that over the course of a similar 5km run, the Watch GT was between 500m to 800m off in comparison to another tracker and the distance recorded on the treadmill itself. Changing some of the settings via the Huawei Health app, I was able to get the accuracy to 400m to 500m, but still a fair distance off.

The heart rate monitor, during these same activities, produced better results. Compared against the same fitness tracker had very comparable results, this across exercises, resting and even sleep tracking. During any activity, the heart rate is tracked via a dial, which indicates the heart rate impact. For those wishing to maintain a constant rate during exercise, the visual here is very helpful and much easier to read at a quick glance than most of its competitors. There are a few different viewing options while in the middle of an activity, which allows users to concentrate on a set goal, etc. Making it easy to view whenever required. But the standard configuration is more than capable enough of doing so as well. There are notifications at specific intervals, such as every 1km during a run, which provide a breakdown of the performance over that period.

One of the more frustrating aspects of owning a fitness tracker is having to charge is before the week has concluded. Yes, we charge smartphones on a daily basis, but there are gaps when it isn’t required. With tracking features such as a 24-hour heart rate monitor and the likes, having a device that can survive weekend to weekend is a great bonus. One of the standout results during the testing period was its battery life. Having charged the unit on the first day, it only required a charge (at 13%) on the 9th day of use, having already used the GPS tracking for five of the nine days. That’s a pretty impressive battery life, especially when compared to many other smartwatches, which typically don’t offer five days on a single charge. Huawei claims that the unit will reach 14 days on a single charge without activating the GPS, which is a fair reflection given the results observed. With the constant heart rate monitoring, as well as regular VO2Max reports included, the results are even more impressive.

The Huawei Watch GT is one of the best fitness trackers I’ve used to date. It’s both sleek-looking and functional. It does, however, lack some features that would make it is a standard smartwatch, which may be annoying to some users. Personally, I hardly ever use most of those smartwatch features – answering calls and talking to your wrist, typing emails, or listening to music. The biggest loss in terms of features for me would be the NFC support, which effectively means no tap payments directly from your device. While the technology is still in its infancy in South Africa, I will admit it’s a nice-to-have. That said, given my requirements from a fitness tracker, the Watch GT is more than sufficient for all my daily needs.

When launched, the unit had a retail price fetching R6,499 for the Watch GT Active, but the pricing has come down in the few weeks and users can be on the lookout for pricing around the R4,999 mark. Compared to the Fitbit Charge 3, there is a significant price gap. The Watch GT, however, delivers quite a lot more, especially when it comes to tracking and monitoring activities directly from the devices itself, without having to use the installed smartphone app. And with Discovery’s recent integration of the Huawei wearables collection to the Vitality list, the Watch GT is definitely one of the top devices in its category on the market today.

The Huawei Watch GT is one of the best fitness trackers I've used to date. It's both sleek-looking and functional.