I was excited to receive the Huawei P40 Lite for review, expecting quite a bit from the device, while also being able to explore first-hand the recently launched Huawei AppGallery.

During the past month, we’ve crossed the one-year anniversary since the US instituted a ban on Chinese manufacturer Huawei, limiting its access to all things Google.

While many of its 2019 releases were still based on the Android platform, along with access to the Google Play store, the list releases affected by the ban continues to grow, most notably including the Mate 30 released in September, as well as the more recently launched P40 range. 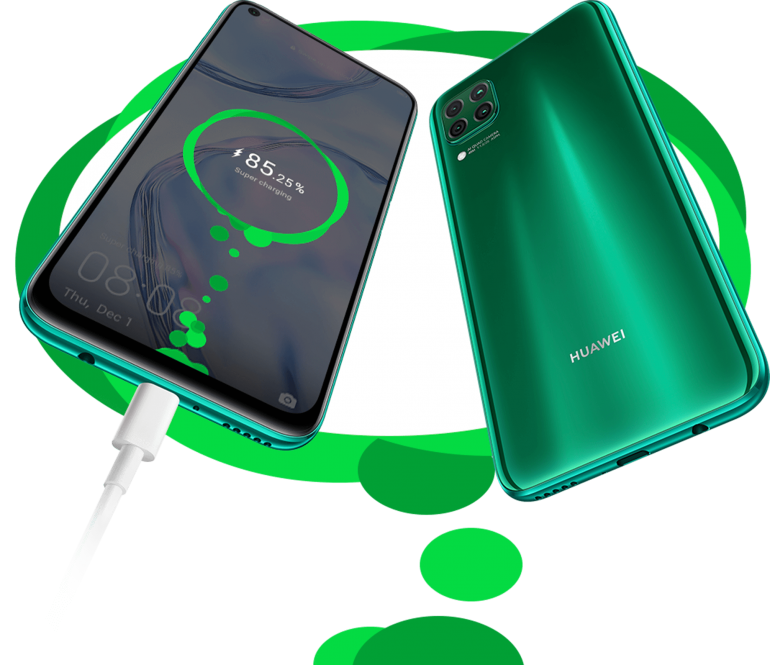 When I reviewed the Y9 Prime in late 2019, it still benefitted from Google Play Services, having been licenced before the ban. With the Huawei P40 Lite, however, that isn’t the case. The device still runs on the Android operating system (Android 10), but the EMUI 10 has no access to Google Play. Instead, the smartphone has to rely on Huawei’s new app digital distribution service, AppGallery.

Booting up for the first time, there’s no real difference and posed no challenges over any previously launched Huawei smartphones. The experience thereafter, depending on your list of favourite apps, will differ from person to person.

There is a good number of apps already available on the AppGallery, ranging from banking apps to a few social media. For the apps that aren’t yet available, there are two options built into the search. You’ll either be redirected to a website for the app, such as WhatsApp and Instagram, or be met with a message confirming the app is not yet available, prompting users to add it to their waitlist to be downloaded as soon as it does become available.

Interestingly, some app sites list their own downloads, such as WhatsApp and Facebook. This allows you to download and install an APK and continue using as normal.

The most notable omission, however, is Instagram. Unfortunately, for me, this is my most used social media app, which only allows me to log into my account via the browser app. While I’m able to browse, follow, search and add posts, it’s not quite the same experience.

The other huge miss for me is the lack of alternative browsers. Instead, you’re left having to use the native Huawei Browser. It takes some getting used to, having to once-again find all my bookmarked pages, passwords and the likes, all of which are saved under my Chrome profile.

The Huawei P40 Lite may run on Android 10, but the experience is slightly different to that of the vanilla build. The default setting on the UI doesn’t have the standard app drawer, while also removing the standard navigation bar at the bottom. Thankfully, the option still remains to adjust these back to your liking, but it’s not the most straight-forward for novice users.

Given that the device still runs on Android and able to install certain APKs, I attempted to install the Google Play Store using an APK as well. Unfortunately, despite several different versions and multiple tries, I wasn’t able to get the app to work without crashing.

Switching tactics, I decided to search for the various APKs for the apps I wanted to use that weren’t available, finding most easily available online – Instagram, Chrome, Firefox, Drive and the likes. And it all worked without any issues, allowing me to go back to my daily behaviour without too many shortcomings.

Overall, then, it is possible to setup and use the Huawei P40 Lite as a normal Android smartphone. That said, I would guess that it wouldn’t be easy for most users to customise their experiences as such. It’s possible, just not straight forward.

Back to the standard review approach, we take a quick look at the build and design. The Huawei P40 Lite very closely resembles the Samsung Galaxy A51.

The similarities extend to the design, bezel, size, weight and the likes. That said, there aren’t many variations of the modern smartphone and the Huawei P40 Lite is by no means ugly.

The unit weighs 183g, which is the average weight for mid-range smartphones. Measuring in at 159.2×76.3×8.7mm, the P40 Lite is close on 1mm thicker than the Galaxy A51, but it’s not something that’s easily noticeable, either in hand or in your pocket.

There are, however, a few key distinctions between the two devices. For starters, the Galaxy A51 has its fingerprint scanner fitted underneath the screen. The P40 Lite has its fitted to the unlock button. This is still standard practice for most mid-range smartphones, so it’s not unusual but is lacking comparatively speaking.

Another distinction is the frame. The Huawei P40 Lite has a plastic frame, with two distinct section spanning off from it, the front and the rear. The front, the glass screen, is slightly more pronounced and you can actually feel the edges of the glass. The rear is much more rounded, feeling smoother in hand as it transitions towards the rear.

Another difference is the layout of the rear camera. The Huawei P40 Lite layout is a much simpler layout with its quad-lens camera fitted neatly into a square. The flash is positioned slightly below the square. On the Galaxy A51, it features a rectangular design with the flash fitted next to the lenses with an open space for a would-be lens that doesn’t exist. On its own it didn’t seem all that bad, but seeing the more precise and elegant layout of the P40 Lite, it’s definitely worth a rethink.

In terms of colour options, Huawei has included three variations for users to choose from. The first, which we received for review, is the Sakura Pink colour scheme – with the colours transitioning between bright pink at the top to a more turquoise palette at the bottom. The second colour is Crush Green, a more basic but still bright green. And the third, a more monotone Midnight Black.

While there is a lot that could be done to improve the design of the P40 Lite, I wouldn’t have expected much more in this regard on a mid-range unit. It’s solid and looks decent. 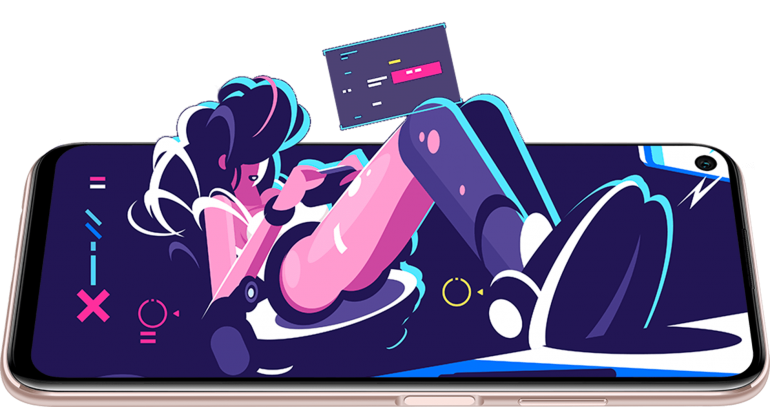 The display has a resolution of 1080x2310px with a pixel density of 398ppi. This, however, doesn’t compare to the far superior Super AMOLED panel on the A51, which has a 6.5″ screen, higher screen-to-body ratio and slightly better pixel density.

The P40 Lite screen is decent, with good colours and reasonable brightness. It doesn’t hold a candle to the A51, though. 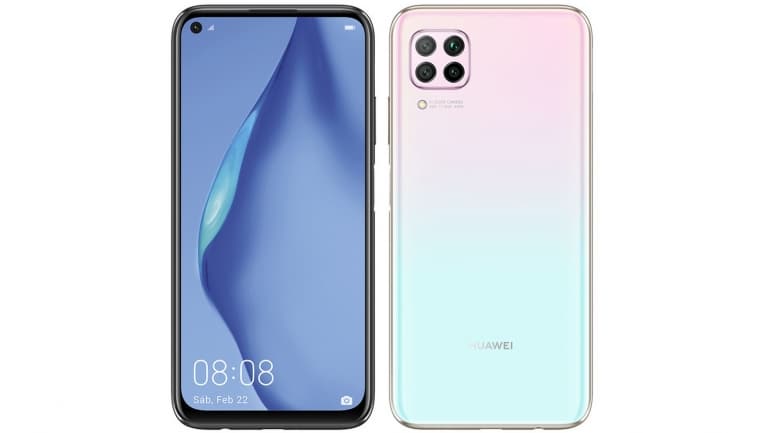 I’ve mentioned it on quite a few occasions previously, modern smartphones are sufficiently powered to handle almost all tasks with ease, even as you gradually move down the ladder. The Huawei P40 Lite is no different.

Even with a mid-2019 CPU on the lower end of the scale, the Kirin 810 SoC is more than capable of holding its own in the standard usage tests. It’s not going to win anything on the benchmark tests, but real-world testing shows it can handle significant multitasking, decent loading times and generally smooth operation experience.

After a few workarounds, I managed to install and run a few modern games, such as Fortnite Mobile, for testing. The experience was good, with no lag of any kind to report. Load times are also not a worry. So, unless you’re wanting to turn pro in any of your favourite mobile games, the P40 Lite more than has you covered in this area.

Battery life is also good. With a 4,200mAh battery capacity, it’s even larger than that of the Galaxy S20.

With a much lower-powered CPU, smaller screen and some top-notch Huawei AI, the battery life is significantly better than many of its competitors. Testing yielded some good results to back this up, with standard browsing time more than 18 hours and continuous video playback at just shy of 20 hours on average.

Idle time will take you over two days to deplete the battery and under heavy load lasts about four hours. During normal, everyday use, however, the battery life lasts anywhere between 24 and 36 hours.

The Huawei P40 Lite has a total of five cameras bolted on, a quad-lens setup on the rear and a single, selfie camera on the front. As discussed previously, the rear camera is fitted in neatly packed square, which is aesthetically appealing, to me at least.

There have been a few jokes about the P40 range and its stove-like appearance of the camera, but not as much as the iPhone 11 a few months ago.

The four cameras on the rear are made up of a 48MP primary colour sensor, an 8MP ultra-wide sensor, a 2MP depth of field sensor (or bokeh) and rounded off with another 2MP macro sensor. The front-facing, selfie camera has a 16MP sensor.

When comparing the P40 Lite to the A51 camera setup, it’s the latter that shades things on paper. But, the Huawei P40 Lite definitely has the advantage in real-world results.

The main camera has a ½” along with a light-sensitive f/1.8 aperture. This makes for some very impressive shots in good lighting conditions. It also manages to hold its own in low-light conditions, but doesn’t match that of the more premium devices I’ve reviewed, like the Galaxy S20 Pro and the likes.

That said, compared to other mid-range smartphones, it’s definitely one of the best I’ve tested.

While the A51 camera also supports macro photography, it’s a lot more polished on the Huawei P40 Lite. There’s quite a lot of fun to be had with the macro camera, and even more so when you already have a macro lens attachment to work with.

The focus is great, which is always the tricky part of macro photography, especially on a smartphone. But the P40 Lite handles these with ease. The results are also pretty impressive in terms of colour and detail. 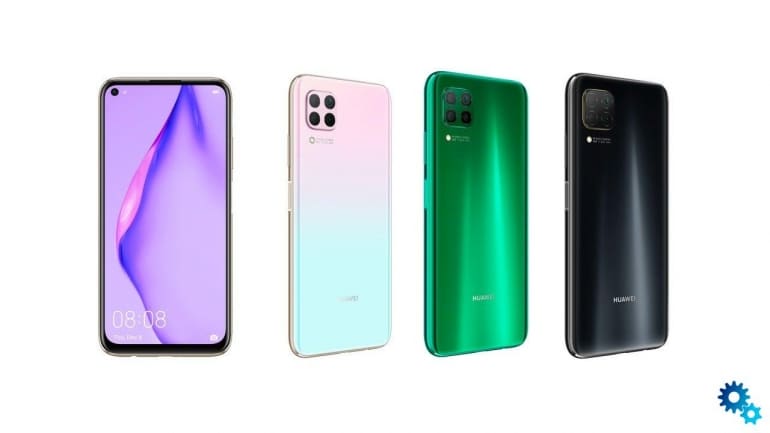 The range of Huawei P40 smartphones piqued my interest, especially when it came to the newly launched AppGallery. The P40 Lite is a really good smartphone. If not for the hassle of learning to use an Android smartphone without the Google Play Store, it may have scored more points across the board.

For me, it was a matter of taking more time setup the unit how I wanted it to operate, with the apps I want to operate it with. For most prospective buyers of a mid-range smartphone, I fear it may be quite a significant hurdle to get over in terms of experience out the box.

The pricing is similar to that of the A51, saving at least R500 over its competitor. The biggest difference between the two devices is the camera and display.

On the one hand, you have the choice of a great screen with the A51 and on the other its a much better camera for the Huawei P40 Lite.

Interestingly, despite the lack of Play Store, the Huawei P40 Lite has a much better optimised and customisable Android 10 with its EMUI 10 interface.

The Huawei P40 Lite is a great mid-range smartphone with great battery life and an excellent camera. If not for the steep learning curve in order to set up apps not available on the Huawei AppGallery, it would be a true contender for top spot in its category.