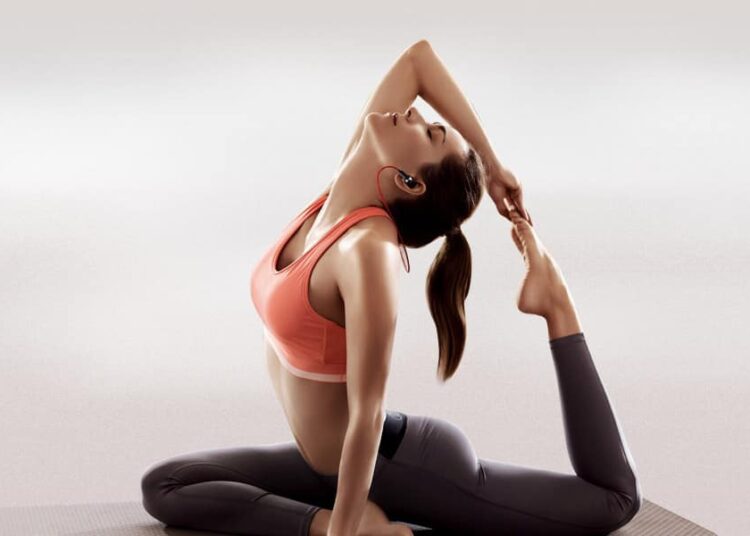 With many smartphones removing the auxiliary jack recently, there has been a huge uptake of Bluetooth and wireless audio devices for users on the move. For those who find themselves hitting the road, the gym and the likes, it makes more sense to opt for a wireless device over wired units, which can easily become tangled as a result of the continuous movements compared to when sitting idly at your desk. A few years ago, there were very few, if any, smartphone OEMs that offered wireless earphones for their respective brands. In 2019, that’s the norm for many of the leading OEMs, including Apple, Samsung and Huawei. The latter has recently introduced their latest wireless audio device in the form of the Huawei FreeLace wireless earphones, which provides a few new features for the user over the standard earphones. 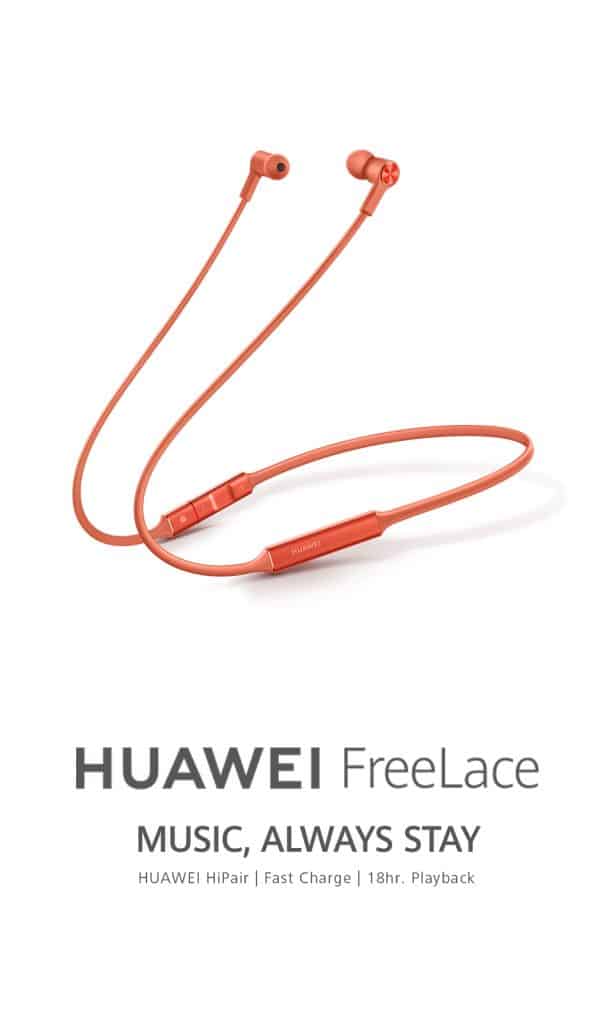 A few years ago, the trend of the ‘necklace’ earphones was on the up. The basic idea was that it would look like an accessory when not in use, while still being functional at the same time. With the rise of the true wireless earbuds a short while later, these types of earphones weren’t as readily available as before, especially not from the leading OEMs. When Huawei ‘reintroduced’ this type of design with the FreeLace, I was curious as to why. I wasn’t a fan of the Gear Circle when it released, and upon first view of the FreeLace, it felt like more of the same. That said, when holding the unit in hand after unboxing, it felt of premium quality and build, with a few hidden features I would discover a bit later on.

The unit I received for review is the Amber Sunrise (also available in Graphite Black) was blazoned in an off red. It’s a vibrant look and not easily mistaken. The connected wire between the two earbuds isn’t a singular connected piece but instead opens at the one end. The same end that disconnects houses the battery and the controls. The unit has a great sense of symmetry, with an equal-sized module on the opposite end, although I’m still undecided whether it too stores some battery or some other type of audio interference shielding, which would be rare for a pair of earphones. Both have an anodized aluminium alloy finish. Back to the control module; it contains the “+” and “-” buttons used for volume control, a power button on the side for turning it on/off and pairing, as well as a middle button, used to stop/start playback, with a few additional clicks for skipping forward and backward.

The earbuds, too, aren’t basic, with the ends being magnetic, which allows them to ‘stuck’ together in at the end to prevent them from tangling. Even the rubberised wires include memory metal underneath the surface, which means that it won’t get tangled in your pocket, bag, or any other carrying container. Even if they do seem a bit tangled, you can quickly shake them around and they’ll just as easily detangle.

Above all the design feature and build quality, the FreeLace also carries an IPX5 rating. This provides the basic level of water resistance, but not completely waterproof. You won’t be able to use the earphones while swimming, but you needn’t worry about being caught in the rain, sweat at the gym or during a run, or the likes thereof.

While I wouldn’t necessarily agree with the overall design, there are some meaningful ideas behind each of the decisions made, making it very useful. If there’s one consideration for the next iteration, the cable could’ve been a tad longer to allow for the controls to be more easily accessible. 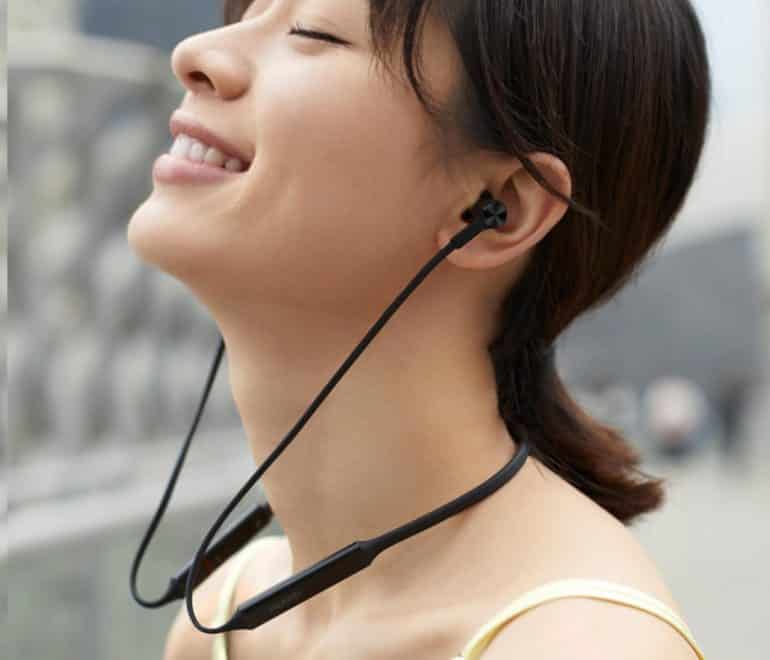 There are two kinds of setup for the FreeLace – one if you’re a Huawei user (running on EMUI 9.1 or later) and another for all the rest. If you’re the proud owner of a compatible Huawei smartphone, you can easily the FreeLace by connecting it to the Type-C port on the smartphone, give it one or two seconds, and then you’re good to go. It’s literally that easy. For everyone else, however, you’ll have to pair the device by means of the standard Bluetooth pairing options, which is to put the device into pairing mode upon turning it on, waiting for it to appear in the Bluetooth connectivity list, and then pairing. It’s not a complicated task, but not as futuristic as a “one-touch” connectivity option.

The controller module, as mentioned previously, houses the battery on the inside. What’s unique here, however, is that it clips out into two ends, both USB Type-C, one male and the other female. What this means is that users can charge the FreeLace directly from any smartphone with Type-C charging port. After a quick five-minute charge, users can get up to four hours of playback before needing to charge again. So, you won’t feel the stress of depleting your phone’s battery to keep the music going. Charing the FreeLace anywhere is a huge bonus. 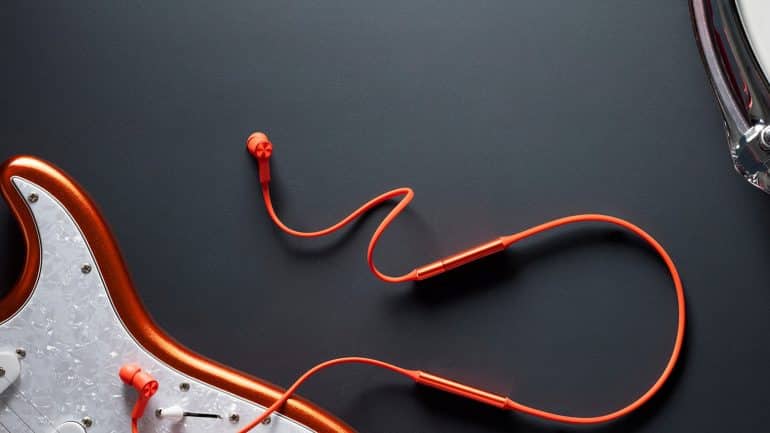 The FreeLace includes 9.2mm dynamic drivers producing clear sound during playback. The lows are more pronounced than any of the other ranges but still produces clear-enough audio. The bass is really good, and definitely the standout feature here. You can fine-tune the settings for a more all-round audio setting. The high frequencies aren’t as good as the rest, which may be the reason the default setting is bass-heavy. Still, the overall audio isn’t half bad.

The unit doesn’t offer noise-cancellation, but that doesn’t mean that there aren’t techniques in play to minimise noise. The dual-channel design, as well as the software algorithms, reduce outside noise and the likes. When you’re listening to music or videos, it drowns out a lot of the background noises allowing you to enjoy uninterrupted audio.

As with many other tech and gadgets, there are always a few pet peeves I have with a few, including wireless audio devices. In this case, it’s the built-in microphone. Even while Huawei added noise-cancelling tech to the microphone, it wasn’t always smooth sailing when it came to voice clarity. The noise-cancelling, however, does work well in reducing background noise but doesn’t clear up the voice quality. As suggested earlier, the module should’ve been better placed. Another issue arises as a result of its positioning, as it continuously rubs against your neck, collar and the likes, which means you’ll have to remain very still whenever you’re trying to make a call.

The FreeLace includes a 120mAh battery, which is, according to the factory tests, supposed to reach 18 hours of music playback. For the most part, it does. Battery life is a critical aspect of any wireless device and the FreeLace won’t let you down. With fast-charge support, the unit charges from zero to full in roughly 30 minutes. It may take a little longer using your smartphone, but will still give you four hours in five minutes of charge. Even with heavy usage during testing, I was still able to eke out about three to four days of usage between charges. While there are limitations on features, restrictive to Huawei devices, the unit still indicated the battery life when in use on my Android-based smartphone. 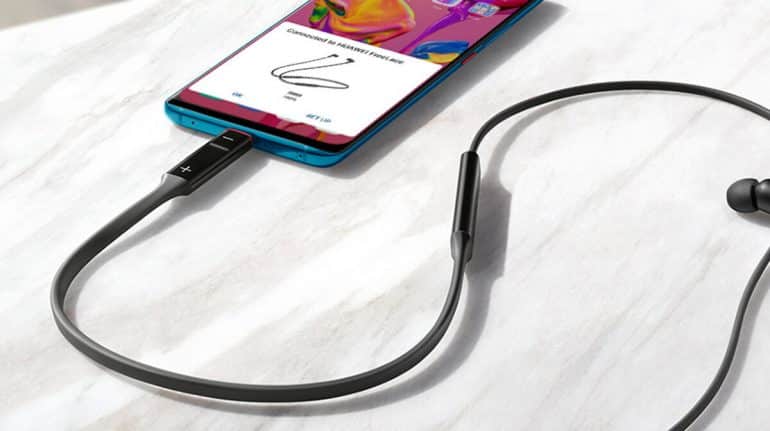 If you’re a Huawei smartphone user, you’ll no doubt get the most out of the FreeLace earphones. These include the one-touch pairing, as well as additional notifications and the likes. That said, they’re still fairly useful for other smartphones, especially those Android-based. If there’s one downside about the unit is its fairly high price. At an RRP of R2,499, it isn’t cheap. In fact, it ventures too close to the previous-generation Beats headphone’s decreased price point. The FreeLace ticks all the right boxes, which will be a good buy for any prospective buyer.

The Huawei FreeLace offers an all-round audio performance, with a couple of really good features built-in. If you have a Huawei smartphone, there's even more reason to purchase the unit, with some exclusive features.