There has been no shortage of fitness devices and wearables flooding the market of late, and it’s become more and more difficult to find something that works for you. In addition to finding the device that meets all your requirements, cost also plays a large role in your ultimate decision-making process, often more so than one wishes to admit. Huawei has also recently joined the fold with a few of its own releases, the Huawei Watch standing out above others, even across the industry itself. But while the Watch is positioned on the high-end of the scale, Huawei has a few more affordable, simpler options that may just work for you. The Huawei Band is one of those fitness trackers.

In a time where the market is saturated with smartwatches, where using apps, reading emails and making calls from your wearable are more of an individual boasting their device’s capabilities instead of something truly functional, devices on the opposite end of the scale often have more appeal in my opinion. While it may look like one, the Band is not a smartwatch at all. At the same time, it isn’t your run-of-the-mill fitness tracker, and offers some onscreen features. So, instead, it is classified as a hybrid, not quite smartwatch, but more than just an activity tracker. We take a deeper look at the design and features of the Huawei Band.

The Huawei Band looks like a watch, which may be the reason it is easily mistaken for a smartwatch. But, unlike many other smartwatches, the Band is very minimalist in its design, something that brings more intrigue. While it doesn’t use any premium metals, it remains predominantly plastic. It isn’t bulky, nor hefty either, weighing just 25g. Often times the lightweight nature of the Band made it easy to forget I was wearing a watch. The rounded glass face is surrounded by a thick, stainless steel bezel, and has no buttons or additional protrusions. Instead, the device is controlled by means of the PMOLED touchscreen. The straps are made of TPU hypoallergenic plastics, and have a diamond pattern design. The unit I received is matte black, but is also available in white and cream.

The face has a 1.06″ screen that has a 128x128px resolution, monochrome display. Interaction with the screen is mainly in the form of swiping gestures. While gestures are reasonably responsive, there are one of two issues with simple touch, especially when selecting notifications to read through. The gestures are also extended to movement, with a quick flick of the wrist to turn on the screen, as well as scrolling through notifications with continuous flicks. I found this very useful when your other hand may be holding a cup of tea or coffee. The Band also has an IP68 rating, which provides dust and waterproof protection. This means that the unit doesn’t need to be taken off during a swim or shower, and with its sleep-tracking capabilities, the only time you need to remove the Band from your wrist is when charging it.

Speaking of which, the unit is charged by means of a device-specific Pogo pin charger. This isn’t necessarily the best solution, but isn’t the worst I’ve seen either, with many other brands also offering similar options. It is, however, annoying that when you do run out of power, you’ll have to use the USB cable in the box, which you may not always carry with you to the office or gym. There is a pin hole next to the Pogo pins, which is used to restart or reset the unit. Given that there are no buttons, if you’re unable to access the onscreen restart or reset functions, this is the only alternative.

The Huawei Band is powered by means of 512KB flash memory microprocessor, which has 128KB RAM and 70mAh battery. These are quite insignificant numbers, but you don’t necessarily require much more. The OS is so simplistic, there is no lag of any kind. The monochrome display also reduces the hardware requirements of the device. The 70mAh battery is stated to last up to 4 days, but in real world experiences, I could never reach 3 days. In fact, I often find myself recharging at the end of the second day, in fears that the alarm may not awaken me the next morning.

Although simplistic, the OS is compatible with a large variety of smartphones, including both Android and iOS firmware. While the list of compatible devices aren’t always listed, I had not issues connecting any of the 3 devices that do not appear on the list. The only requirement, thus, is that the devices run Android 4.4 or higher, or iOS 7.0 or later. Setup of the Band is a mere seconds after downloading the required software, with pairing taking less than 10 seconds to complete.

While the Huawei Wear app does a good job of provided an easy setup of the device, it isn’t always very functional. I’m able to track my sleep, steps, and some activities, along with a few notifications and alarms, but that’s pretty much the end of support. In fact, the software is so basic that it only records your sleep, based on its own monitoring, but doesn’t allow you to fine-tune, or correct the hours which is captured. The app does, however, support other 3rd-party trackers, namely the Jawbone UP app, which is a lot more functional. The only gripe I have here is that in order to sync the steps and activities, you should always run the UP app from within the Wear app after it has successfully synced to its own software.

Receiving notifications on the device is easy enough, which you’re able to select from a list of your installed applications via Huawei Wear. Swiping through, or removing those nofitications, however, are a lot more cumbersome that its intended. For example, it notifies me that I’ve received 5 emails, 3 gmails, and 10 WhatsApp messages. This seems fine, and the assumption, then, that it would take just 3 swipes to remove those notifications is where you’d be wrong. Instead, when entering the nofitications area on the device, you’re left having to swipe through each of the 18 notifications between the 3 apps, which takes a while to get through. Thus, I removed most app notifications, leaving only alarms, meetings reminders, phone call vibrations, and one or two other key notifications.

The Huawei Band device OS offers a very select list of options and menus, which include the main clock, step counter, calorie counter, sleep tracker (in hours), activity tracker (manual activiation), a settings menu (which includes 4 sub-menus; watch face select, restart, reset and about), as well as the notifications area (which only shows up once a notification has been received). It would have been a bonus to have included additional support, such as music selection (to switch between tracks), along with a few others, but then you may be crossing the line towards smartwatch territory, something Huawei may not be willing to do given the list of other wearables within its portfolio. 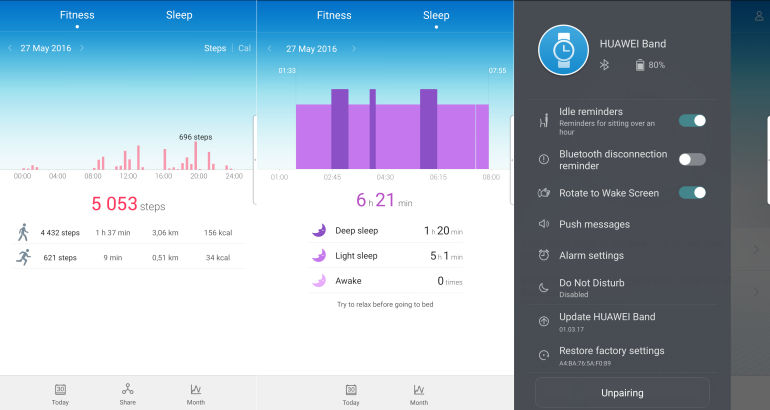 The Huawei Band is a very basic hybrid tracker, but does its job well. The simplistic nature of the device will suit most individuals, who don’t often need a wide variety of connected applications as on other smartwatches. At the same time, the basic concept of the Band is even more appealing given the fact that the price of the unit falls below the R1000 mark. There are a few shortcomings, mostly related to the lack of options and features available on the Huawei Wear software, but if you’re looking for a device that tracks your activity and sleep without too much peripheral features, the Band is a really good, affordable alternative.

There is also the more appealing, more premium model, the Band Elegant.