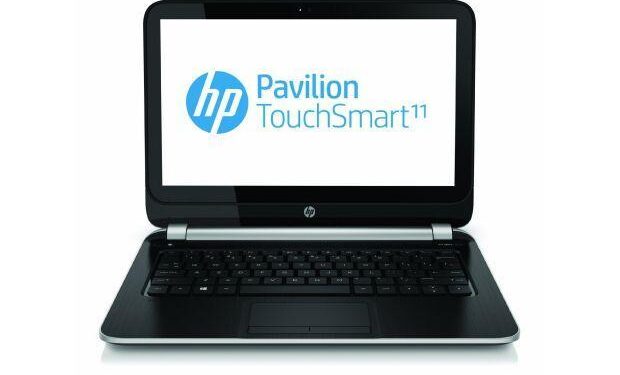 Touchscreens are almost becoming the standard when purchasing a laptop in recent times. As many new laptops, notebooks, and hybrids also come standard with Windows 8, it seems something of a symbiotic relationship. In Q4 of 2013, HP launched a number of laptops, notebooks, and hybrids, which have since gone on sale. Today we look at the HP Pavilion TouchSmart 11, and what it has to offer as a ‘budget’ notebook. The TouchSmart 11 has a smooth, anodized silver cover, standard with the large HP logo. In contrast to the silver finish, the keyboard and display borders are aluminium midnight black, which add to the sleek look and feel. This type of finish means that the laptop remains relatively cool, even during heavy use. While there is a touch of eliteness about the build, it’s not as grand as some of the higher-end notebooks available. Still, you don’t get the budget feel from the TouchSmart 11.

The dimensions of the TouchSmart 11 are 29×21.6×3.58cm, which is thinner than many other budget notebooks on the market. At 1.5KG, however, it is also a little heavier than your average 11” notebook, although it’s not overly disconcerting. Due to its smaller frame, HP had to squeeze in all the necessary ports and connectors, which it has done quite successfully. There are x2 USB 3.0 ports, x1 USB 2.0 port, 3.5mm headphone and microphone jacks, x1 VGA and x1 HDMI ports, x1 Ethernet port, as well as a card reader for SD cards. As is the standard, the TouchSmart also includes a Webcam, a 0.9MP camera, which really should only be used when video calling, due to the lack of quality. The 11.6” (29.4cm) HD WLED BrightView Touchscreen display has 10-point multi-touch capabilities, which is quite responsive and easy to use. Tracking Windows 8 gestures is a breeze, including all those two-finger shortcuts, such as pinch-to-zoom, scrolling, etc. With touch capabilities comes the adverse effect of screen smudging. Thankfully, even after continuous use, there wasn’t anything noticeably affecting the view. The touchscreen, then, is suitable for everyday use.

While the touchscreen performs adequately, the display itself lacks the same oomph, and comes across as simply mediocre. With a resolution of 1,366x768px, don’t expect any HD-like graphics. Colours aren’t as bright, although they cannot be considered as washed out, and contrasts not as distinct. But thanks to the glossy display, there is some redemption in viewing quality. Keep in mind, again, that this is a budget notebook, so we shouldn’t expect much more than what was observed. Keep the viewing angle in the sweet spot and you’re all set, but move just a few centimetres and the picture starts to fade away into grey. Viewing angles, thus, posed some issues, but shouldn’t be too much a problem; an 11” display was never meant to be used in a social setting. Because of the device’s touchscreen capabilities, the negative effects of a badly optimised touchpad is greatly reduced. Even still, HP would want to get things right with its keyboard and touchpad. Keys on the keyboard are comparatively small, but not uncomfortable to use. There are also quite a number of shortcuts at your fingertips by means of the Function key. The matte finish of the keys adds to the overall grip while typing, and don’t need much adjusting to before you’re typing away at ease.

Unlike many of their other laptops and notebooks, the Synaptics touchpad is centred on the TouchSmart 11. It mean seem something trivial, but it makes quite a big difference when you’re typing with equal palm rests on either side of the touchpad. The touchpad is of a standard size, and includes an on/off button, along with multi-touch support, integrated with Windows 8 gestures (if you choose to use these over those of the touchscreen). The touchpad mostly performed as it should, with only a few hiccups in terms of distinguishing between the correct gestures every so often. While it may not look as stylish, the two-button left and right click keys were easy to use. The Pavilion TouchSmart 11 comes fitted with an AMD Dual-Core A4-1250 APU, with Radeon HD 8210 Graphics (1 GHz, 1 MB cache, and 2 cores). In addition, it has 4GB DDR3 RAM, 320GB HDD, running a 64-bit version of Windows 8. These start aren’t overly spectacular, but do get the job done. In its category, the TouchSmart 11 doesn’t perform well on benchmarks tests, falling some distance behind the average, especially compared to devices sporting Intel’s i3 or i5 devices. An easy way to test the performance of the hardware is to run a number of programs concurrently, starting with a browser and 10 opened tabs. You will immediately start to notice the lag creeping into the performance, something that should always be avoided.

In the graphics department, the TouchSmart 11 sports an AMD Radeon HD 8210 GPU. Running Windows 8 Store games posed no issues. Switching to the more graphically intensive games and you’re not going to be gaming for too long, if at all. Again, the TouchSmart 11 falls some way short of the category average.

As is always the case, manufacturers tend to oversell their devices’ actual specifications and longevity. In this case, HP claims an average 7-hour battery life. In all honesty, users may achieve such durations, but drawing very little from the hardware, and long periods of no usage. Using Wi-Fi, watching a video or two, browsing the Web, and editing some documents can quickly reduce the battery life to nothing more than 5 hours. While this is still satisfactory in some sense, a 7 hour charge is still some way off. Fortunately this time, this falls within the category average. All said and done the HP TouchSmart 11 is not a bad by any means. When considering its budget status, it actually has a lot going for it, being one of the only touchscreen notebooks available below the R6,000 mark. For your everyday functions, the TouchSmart 11 performs well, and only really falls short under heavy CPU usage. There are a number of more affordable options offering the same performance, although excluding the touchscreen capabilities, but with the increasing number of Windows 8 touch-based apps, the TouchSmart 11 becomes more appealing. If you’re not in need of serious performances, the HP TouchSmart 11 offers great portability with a battery that can be made to last when used under the correct conditions, and is quite affordable (all things considered). A notebook perfect for students.