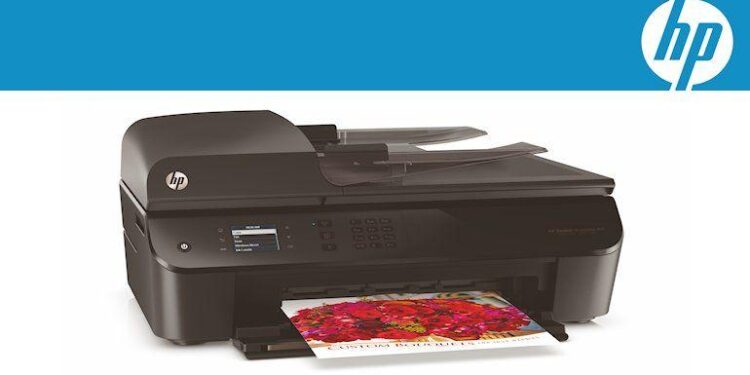 HP, well known for their quality business solutions, also have a few high quality products across different categories for home use. One of these categories is their printing division. The HP Deskjet Ink Advantage 4645 fits the mould of a true HP printer, offering a package for both home and (small) business use. The all-in-one printer offers copy, fax, scan and wireless options above the standard printing, to name but a few. Interestingly, though, HP has showcased the 4645 as an economical cost-saver. We take a look at its overall performance and features, and whether it is in fact as economical as it claims to be.

The 4645 is evidence that the modern printers have moved on from the top loaders of yesteryear. One of the first aspects I noticed about the 4645 was that the paper loading tray forms part of the printing tray, where the pages are fed in from the bottom, and fed back out almost directly on top. What appears to be the loading tray on the top of the unit is, in fact, the feed for copying and faxing, which includes a sensor to detect whenever a page has been inserted. Another oddity on the printer was the relatively small ink cartridges. We can attest to the fact that ink cartridge options aren’t the most affordable. Having such a small cartridge posed some concerns, which we will discuss later.

The HP Deskjet Ink Advantage 4645 isn’t an over-the-top designed printer, but something along the philosophy of form following function. The matte-black plastic finish is only interrupted by the glossy control panel, which houses the menu buttons and the dialpad for fax, as well as the display screen for settings and options. The only issue with the glossy finish being its inclination in picking up fingerprints. Although it isn’t the lightest we’ve seen, the 4645 still weighs in at a respectable 6.2KG, which is very good for an all-in-one printer offering duplexing. The HP Deskjet Ink Advantage 4645 offers a host of features that makes life a lot easier, whether it be for home or business use. Being able to connect wirelessly to the printer already makes it worthwhile, even with any of the other features, which include copying, faxing, scanning, and even duplex printing. When it comes to actual printing, the 4645 does a pretty good job for an inkjet printer. The maximum resolution and print quality are 1200×600 rendered dpi for black and white, while colour printing has up to 4800×1200 optimised dpi. This is nowhere near compared to the 5,760×1,440dpi achievable on the Epson L800 Inkjet Photo Printer, but, at the same time, is less than half its price. Still, printing quality is better than average, without needing to reach such high dpi. Print speeds are also respectable, offering black and white rendered printing at up to 8.8ppm, and draft at up to 21ppm. Rendered colour printing has a speed up to 5.2ppm, and draft of up to 17ppm.

Although there aren’t any official scan speed statistics, the average scan takes less than 10 seconds, but, again, depends on the dpi selected. The unit has a maximum scan resolution of 1200dpi. Copy speeds max out at four copies per minute, which is both scan and print. There are additional copy options, namely the zoom quality, which ranges from 25-400%. One of the more useful features of a modern printer is its ease of use (setup) as well as running costs. While many claim the best of both worlds, it isn’t often the case. The 4645 is sufficiently easy to setup, and can be used without even needing to install any drivers onto your PC, thanks to its wireless connectivity. Once you’ve removed all the stickers and tape, which keeps the device in tact during transport, it’s a simple matter of plugging the unit in and running through the setup options provided on the display. Clicking through the options seemed pretty straight forward. The only slight issue I picked up during setup was that the printer wasn’t picking up paper from the tray. After a quick restart and alignment test (which requires you to print the alignment page and then scan it in to verify), the printer was good to go. At this point, I was able to copy, and print using the wireless feature (once connected to the home Wi-Fi). Printing from your smartphone required the installation of the HP AirPrint feature, which can be easily found on both iOS and Android (although there are a few restrictions on what can be printed). The (standard) scan option required a PC connection, which in turn required the drivers to be installed. Similarly, the fax option also required so minor setup in connecting the telephone cables. As mentioned before, you don’t really need the driver installation on your PC to print, but is required for other, more advanced options. Running Windows 7 or 8 also doesn’t require driver installation, as the printer is detected automatically, even offering the advanced HP print options.

The cost of the unit carries a RRP of R1,799, but can be found slightly more affordable when browsing a few online stores. I alluded earlier to the fact that the ink cartridges for the 4645 are pretty tiny in comparison to regular cartridges, but there is a factory print cycle estimated at 3,000 pages. This isn’t half bad all things considered, but, then again, we cannot always rely on factory estimates and standards compared to real world output. At the end of the day, the HP Deskjet Ink Advantage 4645 is a quality printer, and can satisfy almost every need for any home, and small business. One of more noticeable missing features is the USB flash drive support, but thanks to the wireless functionality, it isn’t really missed. Once you’ve setup HP AirPrint, you have the option of printing from your smartphones, as well as scanning and saving to your device.

The only real concern with the 4645 is the replacement of its cartridges, which may prove to be an issue in the long run. With the factory estimate of 3,000 pages, you might just get away on this one if that holds up. Considering all the features available, the cost is quite good for what you’re getting out, and is one of the best printers in its category currently.