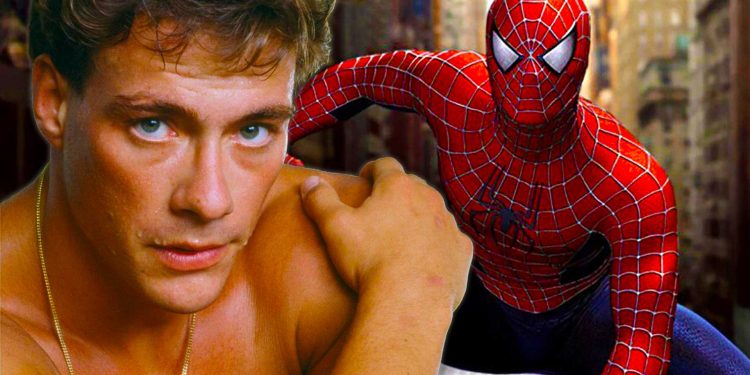 In the late ’80s, an action star by the name of Jean-Claude Van Damme rose through the genre ranks and had everyone talking. From doing the splits to punching snakes, he established himself as a premier performer who would become mentioned in the same breath as Sylvester Stallone, Arnold Schwarzenegger, and Bruce Willis. But did you know that Spider-Man was partially responsible for Jean-Claude Van Damme’s rise?

Bloodsport sent all the right signals

When Bloodsport arrived in 1988, it received mixed reviews. Critics be Van Dammed, though, since the fans loved every second of it, helping the movie turn $50 million at the box office and making it a bona fide franchise. Cannon Films was pleased, especially since it was Jean-Claude Van Damme’s first leading role and he had brought the mega-bucks in.

Ironically, Cannon’s executive Menaham Golan didn’t believe JCVD had star power. According to an interview that Van Damme did with Yahoo, Golan told him, “My friend, Michael Dudikoff, he is a star. Chuck Norris, he’s a star. You’ll never be a star.” Van Damme didn’t give up and begged him for an opportunity, so Golan relented and brought him Bloodsport.

How Spider-Man played a part in JCVD’s rise

Around the time of Bloodsport, Cannon Films had two other films in production: Masters of the Universe 2 and Spider-Man. The production company had done a good job of acquiring these franchises for dirt-cheap and producing relatively cheap films in return. To keep costs down and to get both productions out sooner rather than later, the plan was for director Albert Pyun to shoot both films simultaneously.

Then a snag hit: Cannon experienced financial troubles and had to pull the plug on its deals with Mattel and Marvel. At this point, Cannon had already spent around $2 million on sets and accessories for both films. Not wanting to lose its investment here, since the company was already in the red, it decided to work around what it had. Pyun was given a weekend and he came back with a script that would make use of the material lying around. That story would be turned into Cyborg, starring Jean-Claude Van Damme. So, for all intents and purposes, JCVD played in Spidey and He-Man’s worlds—minus the actual lore and characters.

While Cannon pushed for Van Damme to star in Cyborg and the actor chose the project over Delta Force 2 and American Ninja 3, it ended up costing him some moolah because of an incident on set. Bodybuilder Jackson “Rock” Pickney was an extra in the film when he was stabbed in the eye by Van Damme using a prop. JCVD claimed it was an accident, but the court awarded Pinckney $487,500 in damages, as per Orlando Sentinel. To put this in context, the entire budget for Cyborg was $500,000.

Tell us, were you aware that one of Jean-Claude Van Damme’s most notable films happened because of Spider-Man?