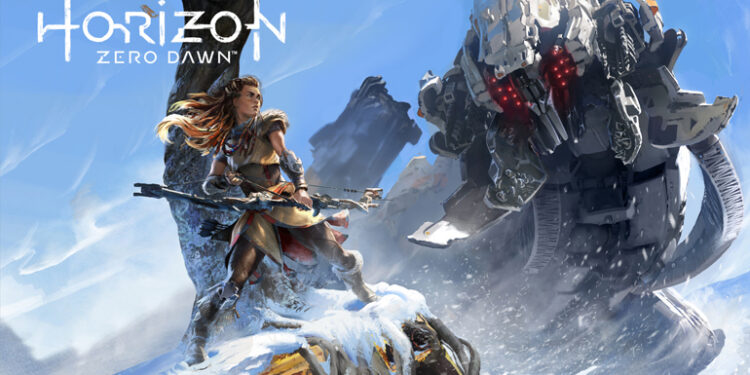 Lately, I’ve been spending my time exploring beautiful environments filled with mechanical creatures, both fascinating and fearsome. I’ve hunted, and have been hunted, and barely escaped with my life a few times. And all throughout my journey, I’ve learned more about the world, it’s many cultures and it’s lore. Most of these new civilisations and tribes view technology as dangerous and forbidden artefacts, although there are some who have decided to harness its power for their own gain. Horizon Zero Dawn might be Guerilla Games first foray into open world games, but there is no doubt that they have created something special. 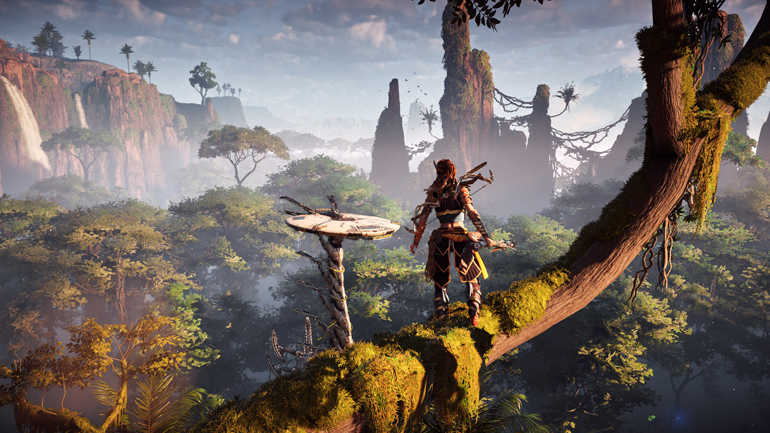 Horizon Zero Dawn takes place on Earth millions of years in the future where, as you guessed it, some or other cataclysmic event has wiped out most of humanity. Out of the ashes, new civilisations and tribes sprung up, each with their own unique culture. The game’s protagonist is a young woman called Aloy, who is part of the Nora tribe, but because of circumstances not yet clear to players, she is considered an outcast. It’s clear right from the start that Guerrilla Games wants players to form a bond with Aloy. We follow her through her childhood as she grows up to become a fierce hunter. It’s an effective tool for getting us to care about her as we see her struggle to accept being an outcast. It’s during her childhood that an accidental tumble down a hole in the ground causes her to discover something amazing (and no it is not the Batcave, although that would have been awesome). While exploring the various tunnels of the cave Aloy discovers a device she calls a ‘Focus’, basically a communication device that attaches to the side of her head (think really small hands-free device). This ‘Focus’ allows Aloy to interact with dormant technology in ways she could only dream of.

Fast forward a few years later, Aloy leaves her tribe behind and sets out to discover the truth behind who her mother was and the mysterious (and deadly) new tribe that has appeared out of nowhere. There is very little hand holding in Horizon Zero Dawn as players are given the freedom to follow the main quest or get completely lost in the vast world. On her travels Aloy will meet various NPC’s which will offer side quests for her to complete. While these sometimes follow the “go there save that helpless person” or “go there fetch that” or, worse, “go there kill this many of that” recipe, it’s the lore that surrounds these quests that made me continue to seek out new ones. You see, when speaking to these quest-giving NPC’s players are given a dialogue wheel which offers up different dialogue choices. While these different dialogue choices may affect the game in minute ways, it also allows players learn more about the world of Horizon Zero Dawn‘s history and lore. It’s a great way in which to allow curious players like myself to learn more about the world, but at the same time, more action focused players can give these choices a skip and get directly to the action. this is just another way in which the game offers players the choice to play the game as they choose. 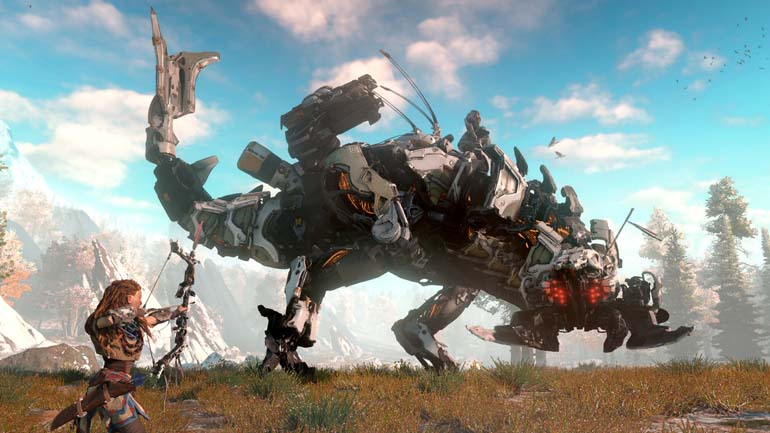 Talking about action, this is where Horizon Zero Dawn truly shines. As Aloy explores the world around her, she will be faced with all manner of mechanised creatures, some more dangerous than others. Taking down these mechanical beasts won’t be easy as each offer their own unique challenge, and forces players to think strategically. Luckily, Aloy has the use of her ‘Focus’ which allows her to not only tag enemies (and you should definitely tag everything) but see where their weak points are, it’s sort of like Batman’s detective vision (I promise this is my last Batman reference). By using her ‘Focus’ to determine a creature’s weak points (the glowing yellow bits) Aloy is able to use an array of weapons to target them. This might sound easy but each creature has their own individual and deadly attacks, such as the Belloback which can spew fire at its foes. Aloy can, however, turn a creatures offensive abilities against them. By targeting a creature’s various weapons Aloy can cause these to explode and, in the case of the Belloback, cause fire damage to the beast. There is even the chance for Aloy to knock off a creature’s weapons and use them against it. Aloy’s own suite of weapons is quite impressive. She has access to bomb throwing slings, exploding tripwires, a spear and of course various bows. Each of her weapons has their own strengths and weaknesses. For instance, a bow (which I like to refer to as the sniper bow) has a great range but a slow reload speed. Deciding which weapon the use when can mean the difference between your death or the creature’s. Aloy can also use different modifications to ‘mod’ her weapons and armour increasing their various stats or craft new ammo types. This, along with the ability to level up Aloy’s defensive, offensive and gathering abilities, makes her quite the force to be reckoned with.

What stood out the most during combat was that although Aloy can go in guns blazing (arrows blazing?) it is sometimes better to take your time and plan your assault. There were quite a few battles where trying to take on a huge metal beast head on caused my early demise. Careful planning, laying traps, distracting your enemies and scouting your surroundings can lead to less dying and more winning (which let’s be honest we all would prefer).

To help you out in battle Aloy has the ability to override the various machines (basically, domesticate them), this allows her to summon them during battles to fight alongside her or even use them as transport, allowing for faster exploration. Being able to “convince” a robot, that only a few moments ago wanted to tear your flesh from your bones, to fight alongside you is truly satisfying. Visually, Horizon Zero Dawn is one of the (if not the) most gorgeous games of this generation. From sunlight blanketing the forest in it’s warm embrace to the to the fog slowly rolling in, each area I explored had me stopping and taking a moment to appreciate the game’s beauty. Guerilla Games have spent a lot of time getting the details just right and it shows, as each area, village or even city feels alive and unique. This beauty also extends to the game’s animations. Seeing Aloy traverse her environment, is a sight to behold. The animations are intricate, smooth and realistic. Observing her duck and dive as she is barely missed by an attack is exhilarating. The amount of attention given to the animations also shows in the way that the mechanical creatures move. Their movements feel familiar (as many imitate real live animals), but a little offbeat. Offbeat enough to make you realise that these are not creatures of flesh and bone. This just emphasises how alien yet familiar these creatures are.

The voice acting is top notch. I quickly found myself beginning to care for Aloy and those that inhabit her world. Heck, I even shed a tear or two during my time with the game. Throughout my playthrough, I experienced the same feeling of awe I had while playing the much lauded Uncharted 4. 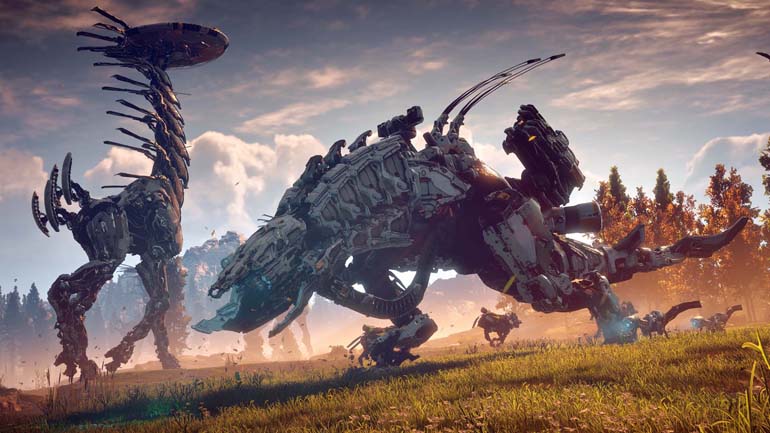 Horizon Zero Dawn is a special game. It is visually stunning, it has a great combat system, and an interesting narrative. It manages to take all theses elements and make them work together in perfect unison. The game gets you to care for its protagonist and the people that inhabit its world, it gets you excited at the prospect of a challenging (and mostly deadly) battle and it makes you want to explore its breathtaking world. It takes the established open world formula and makes it feel unique and refreshing. Horizon Zero Dawn deserves its place among the pantheon of great PlayStation games.