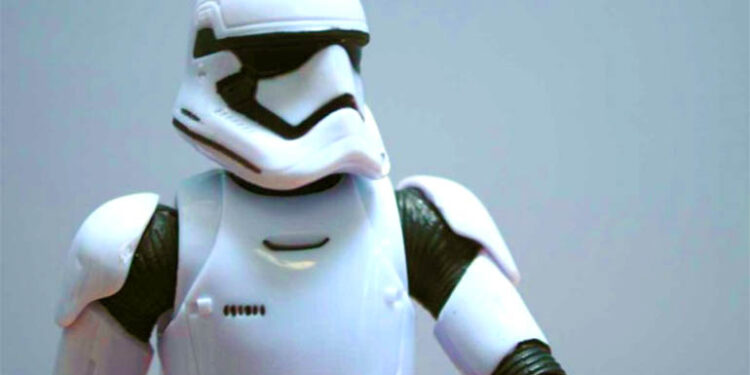 Whether you’re a fan of Star Wars or simply a collector, there’s a specific love for figurines you just can’t explain to anyone who doesn’t get it. In this case, I’m both. So, needless to say, I was very excited to get review the Hasbro Star Wars: The Force Awakens 6-Inch First Order Stormtrooper. Even while standing a mere 15cm tall, the figure delivers on aspects where the 12-inch Finn unit didn’t.

Spanning 40 years, the Stormtrooper is one of the more iconic Star Wars characters. Their armour isn’t overly complicated, fitted with mostly white plating, with black for all of the joints, gloves and eye coverings. This makes it fairly easy to recreate the character as a figurine of almost any size. The detailing on the figure is very close to the movie representation. Upon first look, I thought at just 6-inches there would be a few omissions in this regard but, to my surprise, this wasn’t the case. I did a very close piece-by-piece comparison between the two, and, apart from the figurine representing vents and holes as markings, there’s almost no difference. If there is one oversight, and I’m being picky here, it is that the soles of the shoes aren’t black as it should be. This is an indication of just how good the level of detail is on the First Order Stormtrooper figure. I mentioned previously that the Stormtrooper figure delivered where the Finn figurine didn’t. The latter added forward leg movement at a 90° angle, which I didn’t find very useful and dampened some of the great detail on other parts of the body. The Stormtrooper figure doesn’t fall into those same pitfalls, having a fixed leg positioning. That said, the torso rotates around the lower half of the body, which means you’re still able to position the body so it’s not always straight on. This alone provides a host of different poses over the Finn figurine. Even better still is that the Stormtrooper has a 360° rotatable head. The range of poses from the figure are great and allow you to add some funny, menacing and even provocative stances for display or for a photo shoot. The Stormtrooper’s arms also rotate a full 360°, adding to the additional set of poses. In its right hand, the figurine holds a gun. This, however, doesn’t count as an accessory as it’s affixed to the hand.

While it may look like another miniature figurine with a lack of detail, this figure is anything but. The Hasbro Star Wars: The Force Awakens 6-Inch First Order Stormtrooper is a great addition to any collection.