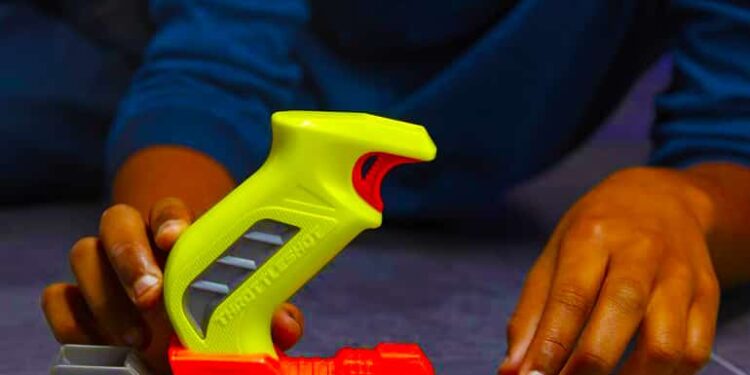 Over the years, I’ve come to know NERF as the guys who make those blasters and foam darts that my kids love shooting me with. And while their blasters are a great toy in itself, Hasbro has decided to branch out the NERF range by putting their own twist on a classic toy we all grew up playing with back in the day, namely toy cars. The latest range from Hasbro is called the NERF Nitro range and, although the name might sound like it belongs to one of their latest blaster products, it is actually a completely new toy range. The NERF Nitro range of toys takes the basic concept of the popular NERF blasters and asks, “What if instead of foam darts the blasters actually shot little foam cars?” This might sound like a strange question but, after spending some time playing with the Nerf Nitro Throttleshot Blitz (the base model in the range), I soon discovered that this was a match made in heaven.

The Nerf Nitro Throttleshot Blitz’s launcher looks to the untrained eye like a Nerf blaster pistol with its end broken off, which in my house with two kids could be quite possible. Instead of holding the launcher like one would a blaster, it is placed on a flat surface with the trigger mechanism facing upwards. It is then primed by pulling back the blue lever at the rear of the launcher. After the launcher has been primed, one of the foam cars can then be slid into the front of it. By pulling the trigger the foam car is propelled forward surprisingly quickly out of the launcher. Naturally, the launcher does have a safety feature that prevents it from firing when it is not placed on a flat surface and doesn’t have a car loaded into it, which means that my kids weren’t able to shoot foam cars at me like they do NERF darts.

Now, you might be thinking, how can a toy that uses such a simple concept keep kids (and their parents) entertained for more than a few hours? I initially thought the exact same thing, that was until my kids and I started to play with the NERF Nitro Throttleshot Blitz. As mentioned, the launcher actually fires the cars over a surprisingly long distance and, thanks to the fact that 90% of the car’s body is made out of foam (only the bottom section and wheels are made of a hard plastic), smashing through and into things doesn’t damage them (or does very little damage). This, of course, opened the door for me and my kids to try and launch these foam cars over our own homemade ramps and through various obstacles.

The NERF Nitro Throttleshot Blitz does come with a set of plastic tyres to try and knock over with your cars and some of the larger NERF Nitro sets do include with various accessories such as ramps, but we found a lot of enjoyment in making our own obstacles courses to launch our foam cars through.

Although the foam cars can travel a long distance, it is important to note that a this can be affected by the type of surface the cars are launched on. Carpets will tend to slow down the cars drastically, while flat hard surfaces will see them reaching surprising distances. Another great aspect of the new NERF Nitro range is that, similarly to the NERF darts, you can buy more foam cars that come in various packs. This includes a foam car and a stunt accessory, three foam cars or six foam cars, meaning you can expand your fleet of cars to your heart’s content.

My kids and I thoroughly enjoyed our time playing with the NERF Nitro Throttleshot Blitz. I have to say that the toy did awaken a competitiveness in me and my kids (and even my wife) as we tried to launch our cars further than our competitor. The most surprising part was that we found that the toy encouraged creative play as a lot of our enjoyment stemmed from building our own little race courses and targets which to launch our foam cars through.

With the Nerf Nitro range, Hasbro has added yet another great toy to the already wonderful range of NERF products. 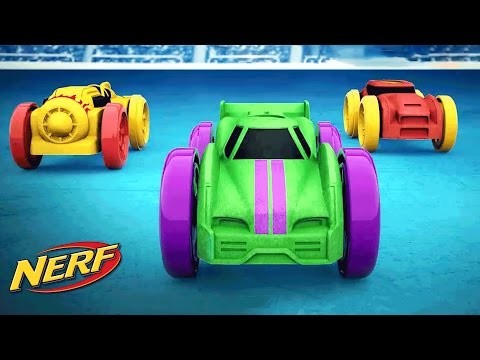