As lightsabers go, Hasbro’s Star Wars Bladebuilders Darth Vader Electronic Lightsaber is still one of the best ones on the market if you’re planning on using it as an actual toy or even cosplaying.

When I was a kid in the ‘70s and Star Wars came out, I had five toys, three of which were action figures. An R2-D2, a Princess Leia and a Luke Skywalker with a retractable lightsaber build into his hand. By today’s estimate, in mint condition, those original toys would now be worth a fortune to collectors. Instead, I dropped R2-D2 in the bath and some of his decals and the paint scrubbed off, Princess Leia’s leg got ripped off during an argument with my sister and Luke’s lightsaber got pulled out of his hand and tossed aside to make way for an Action Man gun. The other two toys were a large kit model of C-3PO which I didn’t have the patience to make properly, so his light-up eyes kept popping out, and a cardboard set of the Death Star docking hangar which I later modified with a magic marker. 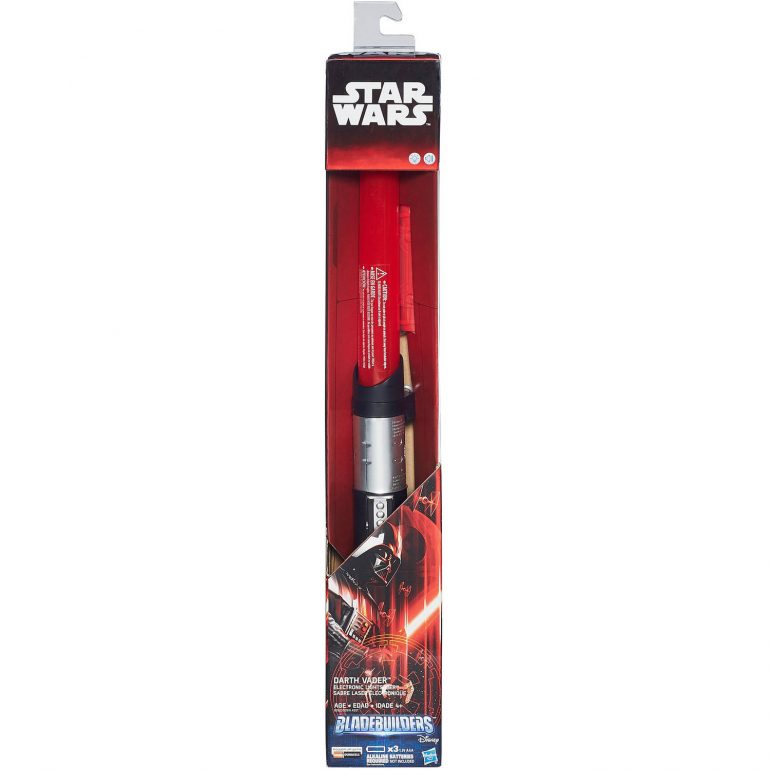 The message is this: Some people collect toys and keep them mint in box, but real kids (and real big kids) play with them.

Over the years, my favourite characters have changed. Luke was my original favourite, later to be replaced by C-3PO for personal reasons only hardcore fans would appreciate… and then it was Darth Vader. And he’s stayed that way for over 25 years. He’s the ultimate bad-ass, whether he’s the villain or anti-hero. Anakin may have been a whiny punk, but Darth Vader is the coolest of the cool. Also, of all the lightsabers out there, whether they have a purple blade like Mace Windu’s or a dual-blade bo-staff design like Darth Maul, Vader’s simple ominous red blade with solid stock grip is the real classic.

The Bladebuilder series has gone beyond the old basic extendable plastic blade, the electronics now creating a proper red glow which travels across its entire length. Powered by 3 triple-A batteries, it now also makes a rather satisfying and familiar sound when switching it on or off, just like the ones from the movies, games and cartoons. The design of the hilt matches Vader’s accurately too, and it fits in the hand comfortably, allowing you to convey the image of the next ruler of the galaxy – once you toss the Emperor over a Death Star safety railing, of course.

All of that being said, there are a few drawbacks. Firstly, because it’s a Bladebuilder it means that the base of the hilt is left open for a joining attachment. That’s fine if you want to add to it, but if you just want to be Darth Vader then it looks weird having a big hole at the back of your ‘saber. The plastic used may be lightweight, but it doesn’t quite look sturdy enough – especially around the belt loop – and despite its accuracy, it’s sad to see all the production trademarks and health warnings imprinted on it. Darth Vader never had health and safety labels on his lightsaber to my knowledge. 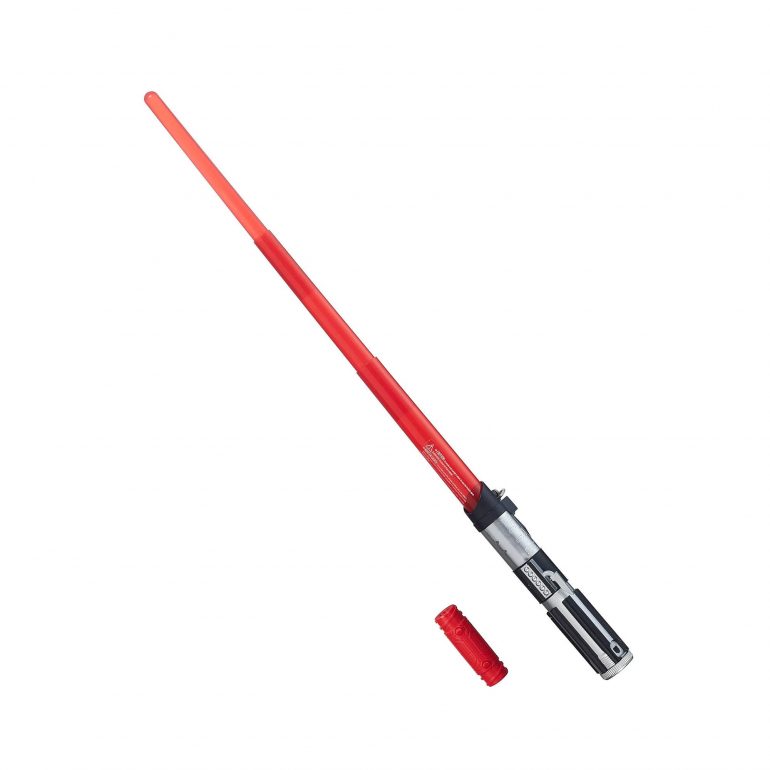 As for the blade, it never fully retracts into the hilt so it’s hard to get the impression it’s anything more than a toy. By that same standard, while it stays solid while extended, when it’s retracted it doesn’t hold together. Carrying it by the belt-loop will cause it to extend by itself just by gravity, so you’ll wish it had some sort of clip so it would behave itself and stay retracted. As for the noises and light, it may make “clashing” noises and flicker when swung, as if battling with another ‘saber-wielding adversary, but it sounds more like a blaster is joining in which distracts from the pure noise it should have and it’s too movement-sensitive.

Despite those faults, the real test of any toy is how it functions when you play with it. Some simple swings of the ‘saber and it’s great. Some more animated movement and it’ll be okay, and even some light duelling should be fine. But don’t go too wild, or strike it against anything solid or it may break, so some caution is advised.

The electronic lightsaber is more expensive than the basic retractable and not as great for duelling as the nerf, but the bells and whistles more than make up for it. Hasbro’s Star Wars Bladebuilders Darth Vader Electronic Lightsaber is a must-have for veteran Vader fans and padawans alike.