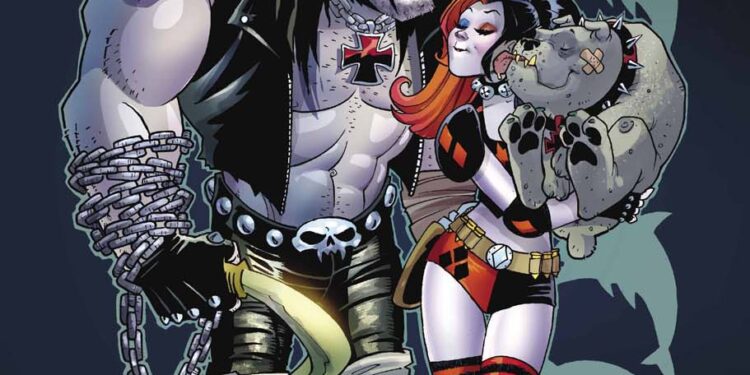 Harley Quinn’s latest adventure brings her face-to-face with the legendary main man himself, Lobo. After one of Superman’s magical balls teleports her across the universe, Harley gets caught up in one of Lobo’s bounty hunting jobs. Harley’s penchant for chaos and her motor-mouth put her almost instantly at odds with him, and he’d love to snap her neck if he weren’t so busy crashing into a planet. We review Harley’s Little Black Book #6. Marooned, the two forge an unlikely partnership based on mutual animosity and rampant carnage as they try to find a way out of their predicament. Of course, since they’re also mostly naked and have zero inhibitions, there’s plenty of inevitable sexual tension too. But when one of Lobo’s ex-girlfriends and a crew of slave-trading pirate bounty hunters get in their way, the gloves are off and it’s time to kill or be killed…

Harley Quinn is a lot like Deadpool… in all the wrong ways. She’s become so popular over the past several years that she’s become overused and rather stale. Lobo went through a similar phase twenty years ago, where his own sudden popularity began to work against him. It’s fitting that these two anarchic characters should overlap at some point, and equally fitting the end result is something which works for all the wrong reasons, and doesn’t for all the right ones.

The plot, it has to be said, is incredibly weak in Harley’s Little Black Book #6. It’s nothing more than an excuse to get these characters together. Because of that, the writing and dialogue are lacking in any sort of excitement or originality. That may work for Lobo, since some of his best stories over the years have been little more than an excuse to see him let rip. The same could be said for Harley in recent years. Unfortunately, you still wish there were a little more substance to things.

There are some woeful out-of-character moments occasionally too, in particular regarding Lobo, who at one stage even allows himself to be captured as opposed to going on one of his traditional rampages. Still, for the most part there’s some enjoyment to be had from his traditional lack of concern for others, and his loathing and poor treatment of Harley is somewhat apt given his satirical overly-macho attitude. Then there’s the artwork.

Simon Bisley’s work on Lobo over the years has been incredible, and once again he proves that he’s the main man’s man. Unfortunately, there’s some kind of disconnect here which is a little hard to fathom. It’s like Bisley’s work has been reined in somewhat, which makes it simultaneously more traditional in sticking to the standard panel layout but also less wild and gleefully chaotic. There are plenty of standard T&A shots which his fans will appreciate, but not enough personal little touches to truly stamp his own mark on it.

What you’ve got in Harley’s Little Black Book #6 is a tasty peanut butter and chocolate combo when it should have been Rocky Road, if that makes any sense. It’s exactly right in ways which are surprising, but it isn’t quite the taste you’re craving. It’s good, better than many other Harley stories on the shelves right now, but neither she nor Lobo benefits from sharing a book with the other.