Harlan Ellison’s The City on the Edge of Forever: The Original Teleplay Review

The Star Trek TOS (The Original Series) episode The City on the Edge of Forever is sometimes regarded as the best Star Trek episode ever. It won a Hugo Award for Best Dramatic Presentation and is rated 9.3/10 on IMDB. Those who love it are often surprised to hear that it was actually re-written at the last minute because it was too long, too expensive, involved too many speaking parts, and too many special effects. It also showed a darker side to the characters that series-creator Gene Roddenberry did not approve of. The original writer, Harlan Ellison, was also anti-war. His version of the screenplay had a not so subtle sub-text that was blatantly against the Vietnam War.

In other words, the episode we know and love could have been even more epic if it had had the budget and the producers were brave enough to make a bold political statement.

But Ellison’s episode did not see the light of day… until now.

Harlan Ellison’s The City on the Edge of Forever: The Original Teleplay is being published by IDW in monthly instalments and the best part is Ellison is collaborating with Scott and David Tipton on their production. I’ll take a look at the first four instalments.

Printed with a beautiful avant garde cover reminiscent of Orwell’s 1984, Issue 1 already declares itself more than just a story: this series is going to be a work of art. The interior does not disappoint: the panels are all hand-painted with incredible attention to detail.

On page 1 we’re plunged immediately into the darker Star Trek, the one that Roddenberry vetoed. I can just imagine Roddenberry’s face – Roddenberry who thought that the presence of Section 31 in the Star Trek universe was too dark – if he were to see the page 1 panel where a man in a mustard uniform says to another crewman, “You want me to give you a dream-narcotic they’ve banned all through the galaxy? Tsk-tsk, Lieutenant, how far you’ve fallen.”

It is this character, not McCoy, who leads the crewmembers down to the planet’s surface, to the “city on the edge of forever”. And the city… oh the city. No longer a few ruins against a backdrop but an icy fortress of spindle-like structures. The guardian too, no longer a mini Stargate, but a group of old men that are tall as pillars and mysterious as statues.

The first issue takes us up until the moment when the character – called Beckwith – jumps through a waterfall-like time vortex into the past.

It also includes a short article on the making of the series. 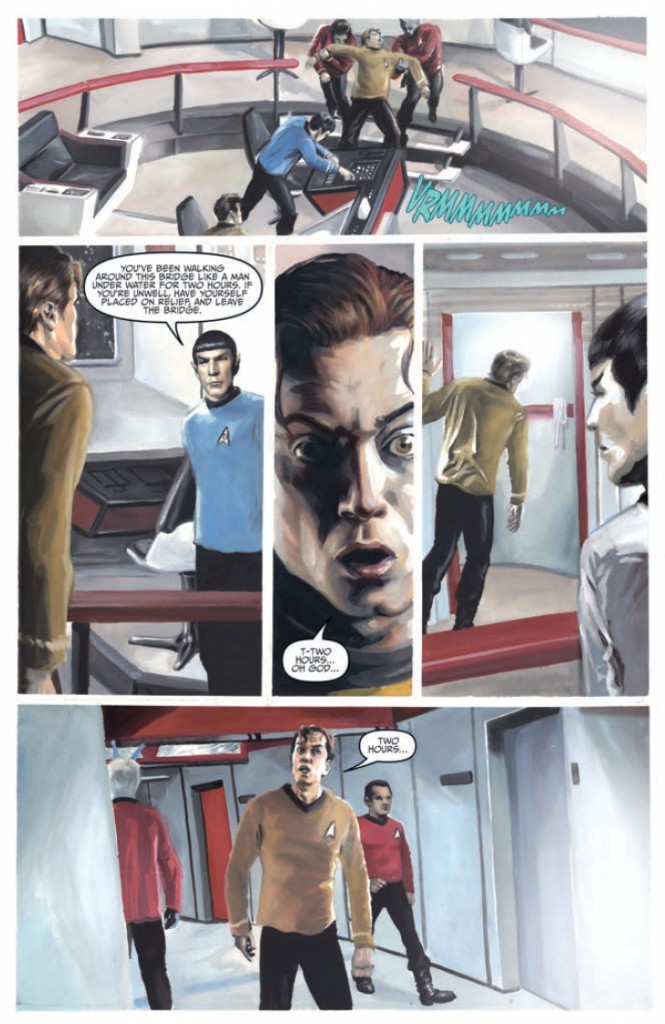 Issue 2 continues directly on from where issue 1 ended, so it’s inadvisable to jump right in without catching the first issue.

More surprises await fans of the original episode as, without revealing any spoilers, Kirk and his team do not immediately jump through after Beckwith. Rather, they go back to the Enterprise and discover that time has indeed changed in terrible ways.

Another thing to note about this series – Yeoman Rand is given a larger role. She’s portrayed as a strong and capable officer. Much more than the sexy assistant for the captain to flirt with.

If there’s one negative thing about this issue, it’s that it doesn’t cover much story. Half the issue is taken with a Q&A with the team that produced it, which still makes for good reading.

The issue opens with an interesting conversation between Spock and Kirk about Vulcans vs Humans that wouldn’t stand up to today’s canon. For instance Kirk states that Vulcans reached space 200 years behind Humans because they chose to do so in peace. This argument underscores the one theme of the eventual episode: that sometimes violence is needed. It was bold of Ellison to attempt to establish a timeline that would be left fluid until many years later.

The theme of race reaches throughout this issue. Spock tries to pass for Chinese and the social injustice in a pre-WWII America is interrogated through him. Had this been a part of the original episode, it would not be difficult to draw a parallel between the treatment of the Chinese prior to WWII and the treatment of Vietnamese in the world where it aired.

Again a Q&A is included at the back of the issue, but this issue seems to include more content. Kirk meets Keeler and they flirt innocently. The issue comes to an end as she invites him for a walk. Spock is seen on the stairs watching ominously. We know no good can come of this. 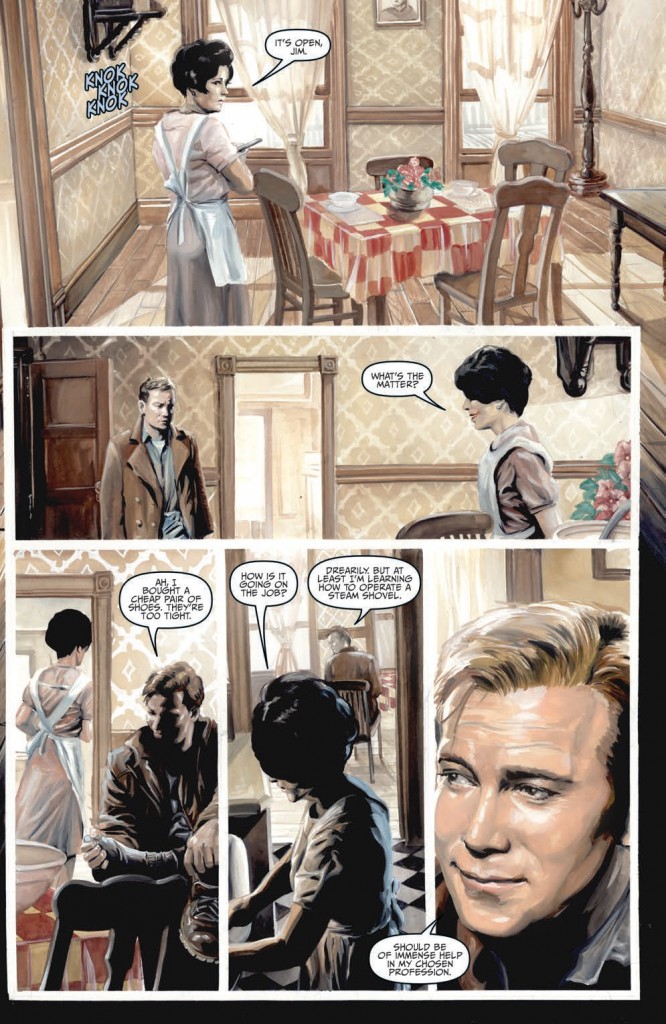 Issue 4 is utterly absorbing and emotionally charged. Kirk gets close to Keeler and finds out at this stage already what Spock suspects – Edith must die. Spock makes it clear that the sanctity of the timeline is of utmost importance and there’s nothing he’s unwilling to do to protect it. Then Beckwith makes his return…

I can’t wait for the next issue.

I know I will be in tears by the end of this.

Personally, I’m hoping for a compendium of all the issues to be released. In hard back. This one’s a keeper. 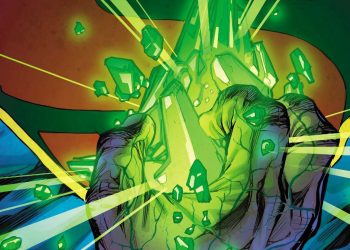 The Evil Within #1 Review

Doctor Who New Adventures with the Eleventh Doctor #1-3 Review