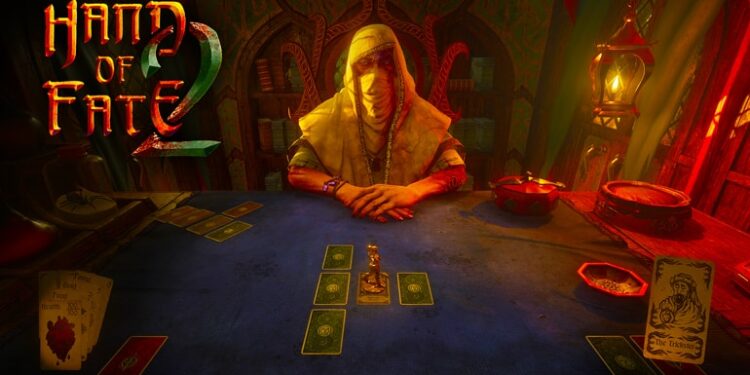 It’s a dark and stormy night. A hooded figure asks if you would like to play a game. Under normal circumstances, my advice to you would be run, run far away. However, this is no ordinary hooded stranger. This is the Dealer and he wants to play a game of cards with you. This is the main setup in Defiant Development’s Hand of Fate 2. As you can probably tell by the 2 at the end of the title, this is the second game in the Hand of Fate series, which has players making numerous life or death decisions, building decks of cards, fighting various creatures and rolling a few dice every now and then.

The game is basically a card game, a choose-your-own-adventure book and an RPG all rolled into one delightful package. While much of the game’s mechanics are mostly the same as the first game’s, there is some notable differences.

First up, players are tasked with customising their avatar, which, while quite limited, is a welcome addition. After deciding which colour hair complements your avatar’s eyes the most, the game begins. Each game starts off with the Dealer magically placing a selection of various encounter cards, from both your own pre-selected deck of cards and his own, down on the playing field. Players then move their token from one card to the next, triggering different encounters each time they reveal a face-down card. Now, while this might sound deceptively simple, each encounter varies greatly and could see you having to make some really important decisions, rolling dice in order to pass skill check or fighting your way through numerous enemies. Each of these encounters offers various rewards, such as weapons, armour and blessings. Figuring out which of these offer the greatest rewards becomes crucial when building your own deck of cards. While these encounters do vary quite a bit, it’s the mix of text-based narrative and Arkham-style combat that keeps them from becoming too reparative.

Along with keeping track of their health, players also need to continually keep an eye on their gold and food supplies. Although running out of gold mostly means that you won’t be able to buy that awesome flame imbued Warhammer, running out of food supplies is far direr. Each time a player moves to a new card they consume one food. Running out of this valuable resource means that a swift death could be just around the corner. Luckily, new supplies can be purchased from various merchants or gained as a reward for completing a quest. One of the best new additions to the game is companions. Throughout their journey, players will unlock the aid of companions by completing certain quests. What makes these companions so valuable is that they will be able to help the player in both combat and narrative situations. There were numerous occasions where I survived a bout of combat or passed a crucial skill check thanks to one of my loyal companion’s aid

As mentioned, players will also be facing all sorts of creatures and baddies during combat encounters. Combat takes inspiration from the Arkham series with players being able to counter, stun, attack and perform one or two special abilities. It’s much more fun and fluid than it was in the previous game, although still not as responsive as I would have liked and does have some clucky moments.

Combined with the diverse weapon choices such as two-handed daggers, one-handed axes or just the trusty sword and shield combo combat comes across as being much less monotonous and loads more fun. For a game based on card and dice mechanics, Hand of Fate 2 does offer some of the tensest moments I’ve experienced in a game. Having one dice roll meaning the difference between being thrust into a combat situation or escaping without a scratch can be a surprisingly tense affair. As can be expected from a game based on card game mechanics, there are times when all your careful planning perfects strikes and wise decision making can come crashing down due to one unlucky dice roll. While this randomness might frustrate some, I found that the game gave players enough choice and control to mitigate some of the bad luck moments that might occur. Of course, Hand of Fate 2 does have the tendency to become a bit repetitive during long play sessions especially if you find yourself stuck on one particularly difficult quest. Hand of Fate 2 retains much of what made the original game so enjoyable and improves on almost all of these elements. Although combat might feel a bit clunky at times and the odd moment of bad luck could frustrate some, the newly added and vastly improved strategic layers and immersive storytelling more than makes up for this. Creating a sequel to a game that had done so many things right can be a daunting affair, but Developer Defiant Development has taken on the challenge and created a game that rises above its predecessor in every possible way.