It seems like humanity can’t do anything right. No sooner does the Earthling-centric Federation establish itself in the galaxy as being an ass-kicking bunch of good guys, then – predictably – the best of the best all get wiped out by a new race of alien beings. Since you’re the leader of Starbase Deep Space Nine Babylon 5 Halcyon 6, it’s up to you to get humanity back on its feet again – with the help of some inherited technology left around by a mysterious old alien race. Which means… resource management. Lots and lots of resource management. You’ve seen this type of game before. In Halcyon 6, you explore areas, mine their resources, defend them when they’re attacked, research new technology and build things which will help you do more of all the above. You may start out with the basics on the station and a fearful crew, struggling to defend your base, but once you’ve built a couple of ships and assigned some officers, you’ll be able to expand your own burgeoning empire, all in the name of the human race. While there are obviously going to be comparisons to X-COM, the real similarity of Halcyon 6, in terms of both gameplay and graphics, has to be the underrated Star Trek: Judgment Rites from, uh, 1993. Sure, its look may be dated and the gameplay is of the same standard, but it’s working from a solid foundation and the table management system works with few complaints. Point and click on whatever action you want your crew to perform and let them get on with it. In the same way, the ground and space battles are a simple turn-based affair, requiring little effort, and the music is top-notch. That may all sound a bit humdrum, but where Halcyon 6 scores is a sense of humour not seen since the classic old Space Quest series. This game is at its best when it’s a parody of space operas like Star Trek, Stargate and Babylon 5. Sometimes it’s something as silly as the clichéd officers with names referencing everything from Star Trek to Alien, while other times it’s a Hicks-style classic “Game over, man! Game over!” scream of panic when the odds aren’t looking good in a fight. Alien races all show up trying to pull a con about who you can trust, you can bluff space pirates into thinking your communications system isn’t working so you can’t surrender, and arguments over the Halcyon 6 furniture not being comfortable enough make for some good laughs. Sadly, the down side of all this is the same problem with almost all resource management games: boredom. For all the chuckles, there’s no way around it that everything you do takes time. Naturally, there’s a fast-forward button so days, weeks and months can pass quickly… but it still seems like a bit of a slog. It makes me wonder if the term “Lightspeed Edition” wasn’t chosen to be ironic. Once you’ve assigned tasks, all you can do is hit that FF button and wait. That’ll probably lead to some impatience when you’re actually doing things (causing you to miss some dialogue), just because you’ll wish things happened faster. If you’re looking for an entertaining, old-school management game which pokes fun at stuffy sci-fi, Halcyon 6 has a lot going for it. It’s not the most exciting of games and moves far too slowly, but it scores for being simple to play and doesn’t take itself too seriously. 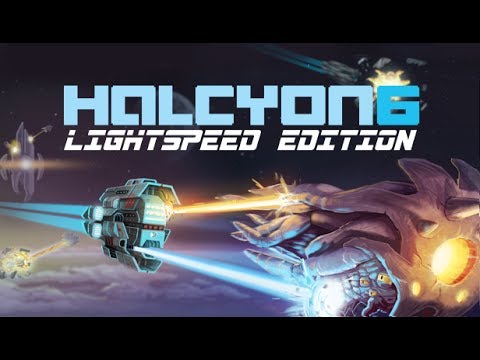